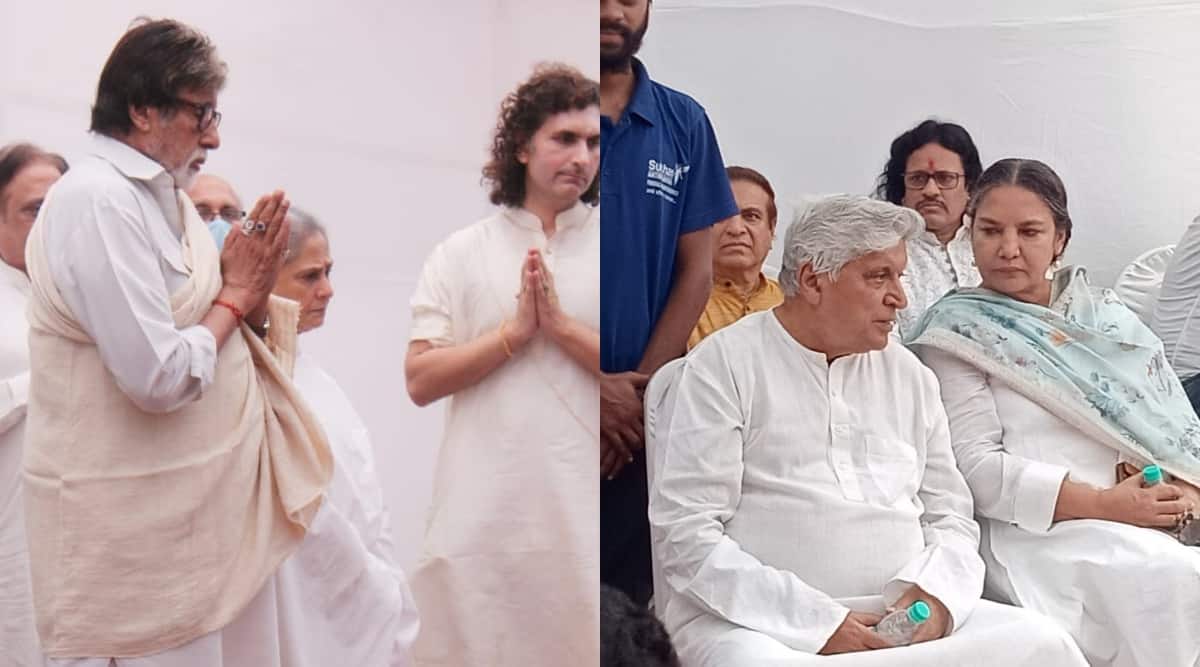 The santoor maestro Pt Shiv Kumar Sharma passed away on Tuesday due to age-related issues. He was 83. He is survived by wife Manorama Sharma and sons Rahul and Rohit Sharma. On Wednesday, the musician’s mortal remains were kept at his home in Mumbai for antim darshan before his state funeral. Bollywood actors Amitabh Bachchan and Jaya Bachchan, Shabana Azmi and lyricist-composer and screenwriter Javed Akhtar offered their last respect to the renowned santoor player.

Amitabh and Jaya met the late musician’s family and upon reaching, Big B folded his hands to pay his tribute to Shiv Kumar Sharma. Later, he interacted with his son Rahul for a while before leaving. Jaya paid her condolences to the musician’s wife Manorama.
Amitabh Bachchan at Pt Shiv Kumar Sharma’s house for his ‘antim darshan’. (Photo: Amit Chakravarty)
Senior Bachchan also penned a tribute for Shiv Kumar Sharma on his blog. The sitar player had composed music for Bachchan’s 1981 film Silsila. The Yash Chopra directorial also starred Rekha, Jaya Bachchan and Sanjeev Kumar. In his tribute, Bachchan wrote, “There is the passing away of the Maestro , ShivKumar Sharma, who played the santoor, a special instrument, from the valleys of Kashmir .. who designed so many film musics for me and many others .. continued success after success, numbs you from the pain of pain .. as also the reverse..”

Amitabh Bachchan mentioned how Shiv Kumar was a ‘humble’ being who put “his heart and soul into whatever he took up.” He added, “A sad ending to the master of the string instrument .. he and Hari Prasad Chaurasia ji , the renowned flutist were a dua for film music .. they came as strong as they could .. played recorded and left.”