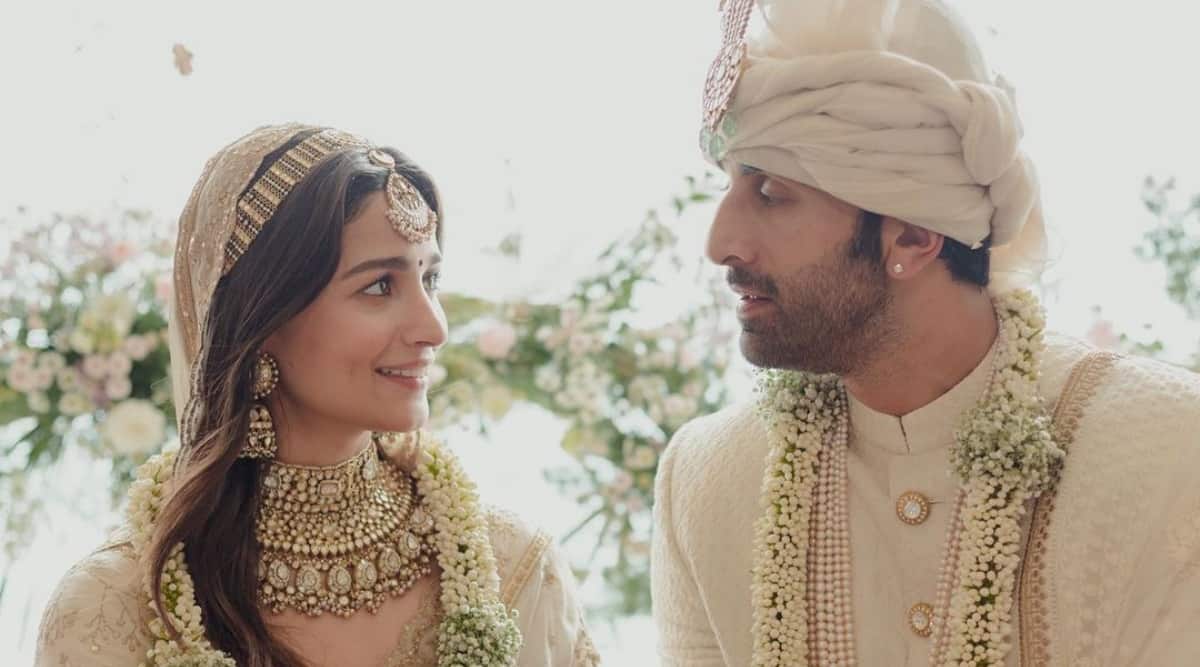 Eagle-eyed fans spotted an old photo of Ranbir Kapoor and Alia Bhatt that was taken 18 years ago at their residence in one of her recent YouTube videos.  In the past, Alia had revealed how she had once given a screen test for Sanjay Leela Bhansali’s shelved movie Balika Vadhu; she was 11 at that time and Ranbir was 20. Bhansali had clicked photos as part of the screen test.  Bhansali had framed the photo and gifted it to her, which holds more significance as she is now married to Ranbir. While Alia hadn’t shared the photo before, fans managed to spot it on their own.

On Saturday, Alia posted a video on her YouTube channel about her 30 days of Gangubai Kathiawadi promotions. In one scene, fans saw the Balika Vadhu screen test photo on a shelf at Alia’s home. The video has been removed from her channel now but fans took screenshots. In the photo, a young Alia rests her head on Ranbir’s shoulder and she is also wearing a saree.
Alia Bhatt and Ranbir Kapoor
Talking about the audition, Bhansali told Anupama Chopra earlier, “I saw a very, very powerful person walking in to my house when she was 9-years-old. This kid (Alia Bhatt) walked in with her mother and her eyes reached out to me. She had come to audition for Black for the small girl’s role. I told the casting director not her. I want to save her for a film. There is something very special about her.”

Talking about the audition, the filmmaker had said, “I told her to dance to Dola Re Dola. I wanted to see how much of a heroine she had in her. She came out with flying colours. I made her sit next to Ranbir, who was assisting me on Black at the time. (I told them) let’s take some pictures, put your head on his shoulders. She said no, she was feeling shy.” She later did the scene, “I’m talking to Soni (Razdan) and suddenly I see her head go on to Ranbir’s shoulder. And I have that picture of the two of them which I sent her last birthday. It was a little copy saved somewhere, stored and scratched.”

In a 2014 interview, Alia referred to the photoshoot, and said, “Ranbir was assisting him at that time. I met Sonam (Kapoor) also but I don’t remember that,” she giggled. Speaking about the photo shoot she said, “It was damn stupid. And Sanjay sir still tells me you were flirting with Ranbir even at that time. I didn’t even know what flirting mean then,” Alia added.

Ranbir had opened up about this at the Lokmat Maharashtrian of the year Awards in 2017. He said, “Not many people know that Alia and me were actually going to debut together when Sanjay Ji was making a film called Balika Vadhu. We had also done a photoshoot together and since then, I have been a fan of her.”

Ranbir Kapoor and Alia Bhatt began dating in 2017 while shooting for their film Brahmastra. They tied the knot on April 14 at Bandra, Mumbai in the presence of close friends and family.