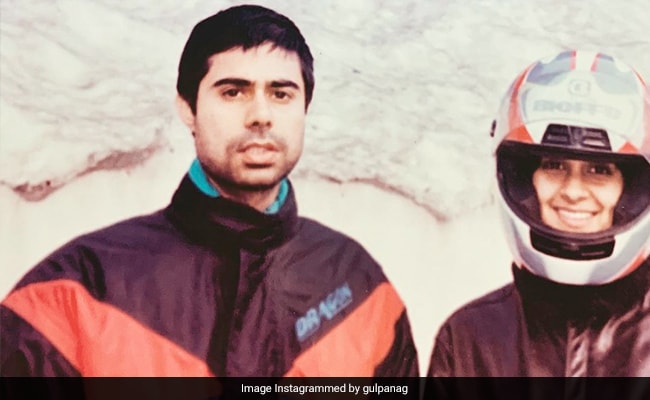 Actress Gul Panag is on a cycling trip to Ladakh. This is not her first visit to Ladakh but a lot has changed since her trip to the picturesque location, the star has said in a new post. Explaining that she was last in Ladakh in 2002, she said that her return to the place has only proved to her the effects of climate change. Sharing a set of images from her current trip as well as the one from two decades ago, Gul Panag said, “Pedalling to Ladakh. Climate change is real! We first went to Ladakh in 2002. On a bike. Back then, at the end June, Baralacha Pass had 12 feet of snow (swipe to see older photos, featuring Rustom Attari and SS Panag). Now it was just rocks, bad roads and dust.”

Gul Panag added, “The first real challenge of our cycling trip came here. The road is non-existent; the last few kilometres, and one is struggling with the altitude. It’s the first major pass and it’s hard not because of its height but because it’s the single largest transition in altitude. One is at approximately 10,500ft the night before, and then the constant climb to 16000ft. The lungs are at bursting point.”

The actress also spoke about how difficult it is to cycle through the terrain. She explained, “No amount of preparation in the plains will get you ready for this or replicate the conditions. It’s completely mind over matter. The only way is to keep one’s head down and keep pedalling.”

Speaking about the experience, Gul Panag further added, “The climb to Baralacha made me pray more than I ever have in recent memory. It was the only way to slow my breathing down and continue pedalling.”

Before this, Gul Panag also shared a glimpse of the first day of the cycling trip. In the caption, she said, “#pedallingtoladakh. Day 1 of our ride. Replying to the post, Maria Goretti said, “This is just bloody amazing, all the very very best Gul, you are so bloody amazing.”

Here’s another glimpse of Gul Panag preparing for her journey to Ladakh. In the caption, she said, “Reunited with these two. My Marlin 5. And Super Milo. Bike assembled. Spirits high. Ladakh here I come!”

A few days ago, Gul Panag had also shared a glimpse of her training to go riding in the mountains. Sharing a photo she said, “Day 1 of training to ride in the mountains. And it’s a whole different ball game! Have been training for the last few weeks, averaging 25 km 3-4 times a week. But riding in the plains doesn’t come close to this. Endurance and strength apart, getting to know the bike takes some getting used to.( On the very first major climb, while downshifting , the chain came off.) And I couldn’t put it back. Needed my father to come and help me. Like when I was little.”

On the work front, Gul Panag was last seen in the film 420 IPC.