Inside Kareena-Karisma And Friends' Holiday In London 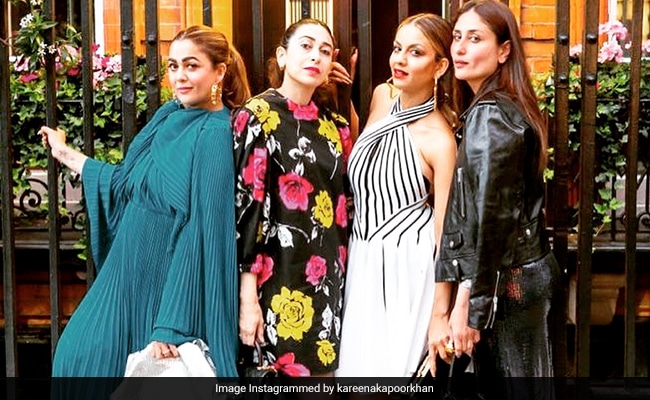 New Delhi: Kareena Kapoor, holidaying in London, managed to click and share a perfect picture with her sister Karisma Kapoor, BFF Amrita Arora and friend Natasha Poonawalla. The quartet look fabulous as ever as they pose together. Kareena Kapoor added a Mean Girls reference to her caption. Kareena’s caption is a tweaked version of what Gretchen Wieners says in the film after queen bee Regina George breaks a petty rule. “You can’t sit with US…but you can stand and pose with US…cause that’s what we love to do,” wrote Kareena Kapoor. To say it like Gretchen Wieners does in the film, Kareena’s post with her friend was “fetch.”

Before that, Kareena Kapoor shared a set of super cute pictures with husband Saif Ali Khan. She captioned them: “Beach Pe a Jacket and a Kiss…the English Channel…Is that summer in England?”

Another equally adorable Instagram entry posted by Kareena Kapoor, featuring son Jeh Ali Khan. “Can we cuddle under a rainbow always and forever…? Cause there is nothing else I want or no where else I would rather be,” wrote Kareena.

In terms of work, the actress was last seen in the 2020 film Angrezi Medium, co-starring late actor Irrfan Khan, and actress Radhika Madan. Kareena will next be seen in Aamir Khan’s Laal Singh Chaddha, which is a remake of the 1994 film Forrest Gump. Kareena shot for parts of the film during her pregnancy. The actress will be seen in Sujoy Ghosh’s untitled film, co-starring Vijay Verma and Jaideep Ahlawat. She will also co-produce a film with Ekta Kapoor.

In terms of films, Karisma Kapoor was last seen in the 2012 film Dangerous Ishhq, after which she featured in special roles in films such as Bombay Talkies and Zero. Karisma Kapoor’s last project was ALTBalaji’s web-series Mentalhood. She will soon star in a project titled Brown, which she announced on her Instagram profile earlier this year.