Kareena-Karisma, Shibani, Amrita Arora In A Fabulous Pic From London 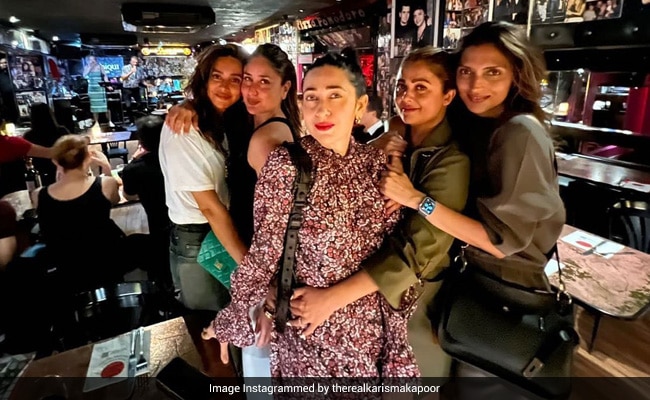 Karisma Kapoor posted a throwback picture from not so long ago on her Instagram profile on Wednesday. In the stunning photograph shared by Karisma Kapoor, she can be seen posing with sister Kareena, friends Amrita Arora, Shibani Dandekar and Dolly Sidhwani. In her caption, Karisma Kapoor revealed that the pictures were taken by Farhan Akhtar. Karisma Kapoor captioned the post: “Missing the girls. Thanks Farhan Akhtar for directing this photoshoot.” She added the hashtag #summervibes. In the comments section. Farhan Akhtar wrote: “Such great subjects who refused to stay still in those low light conditions.”

Check out the post shared by Karisma Kapoor here:

When Karisma Kapoor was in London, she shared this stunning shot with Kareena, Natasha Poonawalla and Amrita Arora. “No caption needed. #justus,” she wrote.

Kareena Kapoor posted picture-perfect moments from her London getaway too.

Sharing this super cute picture with Jeh, Kareena wrote: “Can we cuddle under a rainbow always and forever…? Cause there is nothing else I want or no where else I would rather be.”

In terms of work, Kareena Kapoor was last seen in the 2020 film Angrezi Medium, co-starring late actor Irrfan Khan, and actress Radhika Madan. Kareena will next be seen in Aamir Khan’s Laal Singh Chaddha, which is a remake of the 1994 film Forrest Gump. The actress will be seen in Sujoy Ghosh’s The Devotion Of Suspect X, co-starring Vijay Verma and Jaideep Ahlawat. She will also co-produce a film with Ekta Kapoor. She will also star in a project backed by Rhea Kapoor.