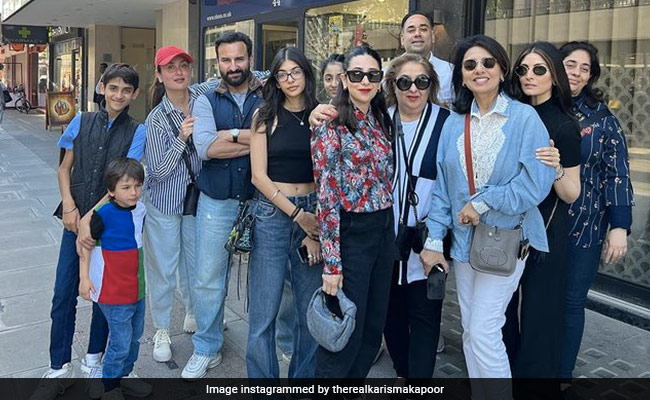 New Delhi: The Kapoors are known for their extravagant parties and annual celebrations. Just like Alia Bhatt told us on the latest episode of Koffee With Karan, the family loves to do everything together, and Neetu Kapoor’s birthday on Friday was no different. Neetu celebrated her 64th birthday in London with her family by stepping out for an intimate lunch that ended with her cutting a cake. Pictures from the bash were shared online by Neetu Kapoor’s niece, Karisma Kapoor. Those present at the party included Neetu Kapoor’s daughter Riddhima Kapoor Sahni with her husband Bharat Sahni and daughter Samara, Kareena Kapoor with Saif Ali Khan and Taimur, Karisma with daughter Samaira and Neetu Kapoor’s sister-in-law Rima Jain, among others.

Karisma Kapoor’s post begins with an image of the entire family posing in front of a restaurant in London. This is followed by a few selfies of Karisma with her family, a video of Neetu Kapoor’s birthday cake and an image of the veteran actress with her cake.

Kareena Kapoor also posted an image from the birthday lunch. In the picture, Neetu Kapoor, Saif Ali Khan and Rima Jain are seen together. In a note, Kareena said, “Chinese lunch is a must on birthdays.”

Before Neetu Kapoor’s birthday, Karisma Kapoor and Kareena Kapoor spent some quality time with their friends, actress Amrita Arora and businesswoman Natasha Poonawalla. Sharing an image of the four lovely women, Kareena Kapoor said, “You can’t sit with us…but you can stand and pose with us…Cause that’s what we love to do…”

On the work front, Neetu Kapoor was last seen in JugJugg Jeeyo. Kareena Kapoor will be seen in Laal Singh Chaddha with Aamir Khan.