HomeBollywoodKhushi's The Archies Co-Star Suhana, Shanaya Are Blown Away By These Pics
Bollywood

Khushi's The Archies Co-Star Suhana, Shanaya Are Blown Away By These Pics 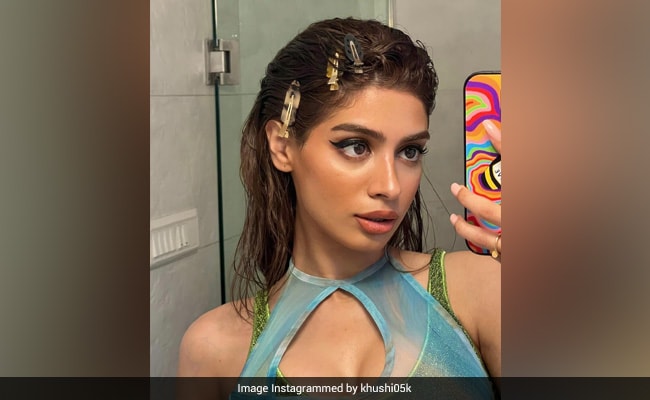 Khushi Kapoor has treated her Insta family to a new picture of herself, and we can’t get enough. Boney Kapoor and late Sridevi’s daughter Khushi, who will be making her big Bollywood debut in The Archies, shared mirror selfies in which she can be seen getting ready for her shoot. In the images, Khushi looks beautiful in a green and blue shimmery outfit with a plunging neckline. Sharing the picture, she wrote, “In between changes”. Soon after she shared the post, her The Archies co-star Suhana Khan commented, “Wowwowww,” followed by a love-struck emoticon, while Khushi’s cousin Shanaya Kapoor dropped heart emoticons. Anurag Kashyap’s daughter Aaliyah Kashyap wrote, “unrealllllll,” followed by crying emoticons.

Khushi Kapoor will be making her acting debut with Zoya Akhtar’s The Archies. The movie also stars Shah Rukh Khan’s daughter Suhana Khan, Amitabh Bachchan’s grandson Agastya Nanda, Vedang Raina, Yuvraj Menda, Dot and Mihir Ahuja. The movie is the Hindi adaptation of the popular comic of the same name. In the movie, Khushi will play the role of Betty Cooper, Suhana will be seen as Veronica Lodge and Agastya as Archie Andrews.

In June, The Archies team returned to Mumbai after wrapping up their Ooty schedule. After returning, Khushi Kapoor, her sister and cousin Shanaya Kapoor partied together. Sharing the picture, Khushi dropped diamond emoticons in the captions.

Earlier, she shared pictures of herself from the sets of The Archies. In the image, Khushi can be seen sitting on a chair in a green and black outfit. Check out the

The Archies will release next year on Netflix.