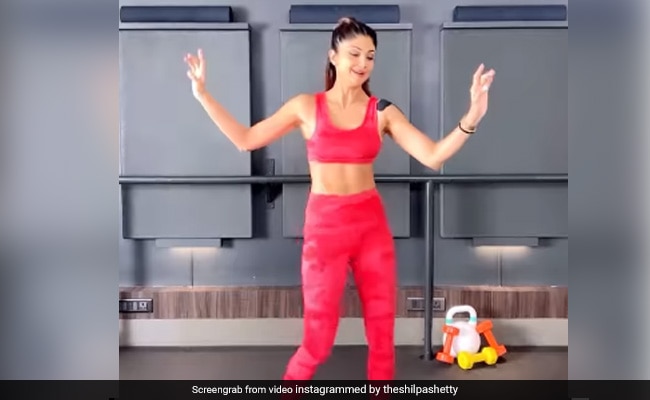 Shilpa Shetty in a still from the video. (courtesy: theshilpashetty)

New Delhi: Shilpa Shetty is one of the fittest actresses in the country today and we see ample proof of this in her social media posts. And, while she may be sweating it out in the gym, the actress always makes sure to have fun while she is at it. Now, on the occasion of Lohri, the actress has managed to give her workout session a festive twist by adding elements of bhangra to it. Sharing a video of herself doing a step, Shilpa Shetty wrote, “Bhangra workout taa sajda, when you choose your favourite Bollywood song or Punjabi music track and get grooving.”

A week ago, Shilpa Shetty shared a video of herself performing a fun dance-workout routine, which she described as “Hip Hop-style Aerobics”. Sharing the video, an excerpt from her caption reads, “This one is focussed on improving cardio-respiratory health, burn fat, improve arm-and-leg coordination, and (bonus) you get to learn some cool moves. In a 45-minute session, we burn some serious calories as we move our coordinated arms and legs in multiple directions. Also, it sharpens the brain too, as one has to remember a lot of moves in a sequence while we groove to our favourite music.”

Late last year, Shilpa Shetty shared a video of herself performing the suryanamaskar and even explained its benefits. In the caption, she wrote, “Sometimes, the simplest of things are the most beneficial. The humble Suryanamaskara may seem rather easy but works perfectly and effectively on the entire body. This variation, known as the Dynamic Suryanamaskara, helps increase shoulders-and-core strength, improves blood circulation, and strengthens the erector spinae muscles. Additionally, it also stretches the hamstring and improves flexibility, reducing stress and anxiety…”