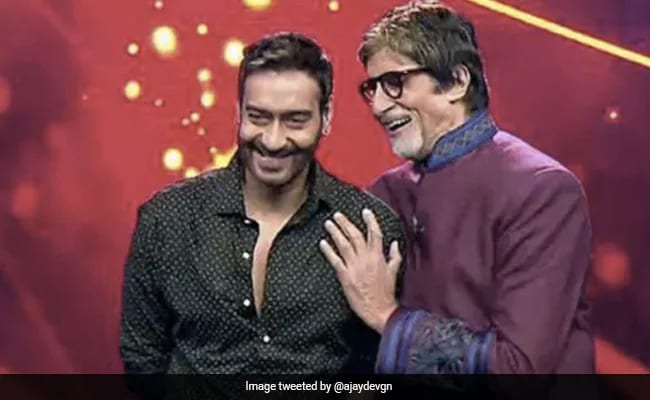 Ajay Devgn shared this photo with Big B. (courtesy ajaydevgn)

Ajay Devgn – Amitabh Bachchan’s Bol Bachchan hit the theatres 10 years ago on this day. The hit comedy film won audiences’ hearts when it hit the theatres in 2012 and has been one of the most iconic films of that time. As the film completed 10 years of its release on Wednesday, Ajay took a stroll down memory lane and shared a picture from the sets. He posted a ‘throwback’ picture from his days on the sets of the film. In the photo, Ajay is seen holding a gun in his hands while Rohit is holding a camera and shooting him. He wrote, “Two Bol Bachchans shooting each other. #10YearsOfBolBachchan”.

Although the picture took people down memory lane, it was a certain comment by Big B that cracked up many! Amitabh Bachchan took to the comment section of the post and wrote, “Are yaar “teesre” ko bhi bula lo na shooting karne“.

Looks like Big B is missing his time on the sets of Bol Bachchan! Well, Ajay took note of it and responded quickly. He wrote, “The OG Bachchan doesn’t need an invitation.”

The film revolves around Abbas Ali (Abhishek), a resident of Karol Bagh, New Delhi. He stays there with his sister Sania (Asin) and they are legally fighting to get the title of their ancestral property. But the odds turn against them and they lose the case. Their well-wisher, Shastri Chacha, advises and convinces them to migrate to his village Ranakpur and assures Abbas that he will get him a job at his owner’s place. The owner is none other than the powerful Prithviraj Raghuvanshi (Ajay).

The film won many hearts. To date, people remember its rib-tickling scenes and funny dialogues.