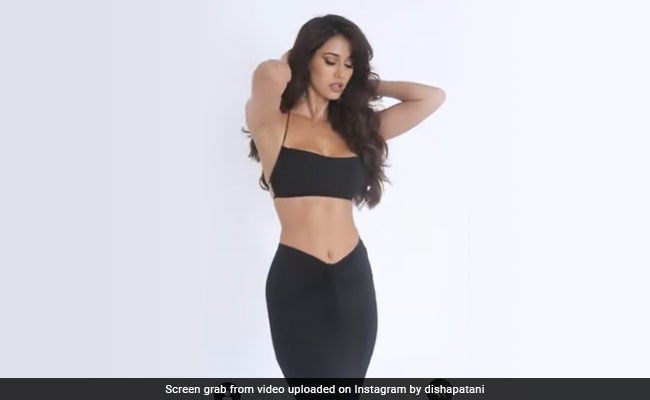 Disha Patani in a still from the video. (courtesy: dishapatani)

New Delhi: Disha Patani never skips a chance to burn up Instagram. The actress, who is garnering a whole lot of praise for her performance in the recently-released trailer of Ek Villain Returns, is currently busy promoting the film on various platforms. On Monday, Disha shared a video of herself posing for a photoshoot, with which she “kickstarted Ek Villain 2 promotions” (as per her stylist). Disha looks absolutely stunning in a black co-ord set from the shelves of MESHKI. Sharing the clip, Disha Patani  wrote nothing in the caption and just accompanied it with a black heart icon. Her look for the trailer launch of Ek Villain Returns left her friend and Tiger Shroff’s sister Krishna awestruck. Reacting to the post, Krishna dropped a heart-eye emoji and in a separate comment, wrote: “Fav look” with a fire icon.

Disha Patani and Krishna Shroff often drop red heart and fire icons on each other’s Instagram posts. Not just Krishna but Tiger Shroff’s mom Ayesha also leaves adorable comments on Disha’s social media posts. The actress and Tiger Shroff are rumoured to have been dating for quite some time now.

When Disha Patani shared a poster featuring herself with co-star John Abraham last week, Ayesha Shroff was all praise for her killer look. “Wow, Deeshu. Looking stunning,” she wrote in the comments section.

Disha Patani, who is known for her performances in films like MS Dhoni: The Untold Story, Baaghi 2, Kung Fu Yoga and Malang, will be seen alongside Arjun Kapoor, Tara Sutaria and John Abraham in Ek Villain Returns.

The film, which is a sequel to the 2014 movie Ek Villain, has been directed by Mohit Suri and will open in theatres on July 29.