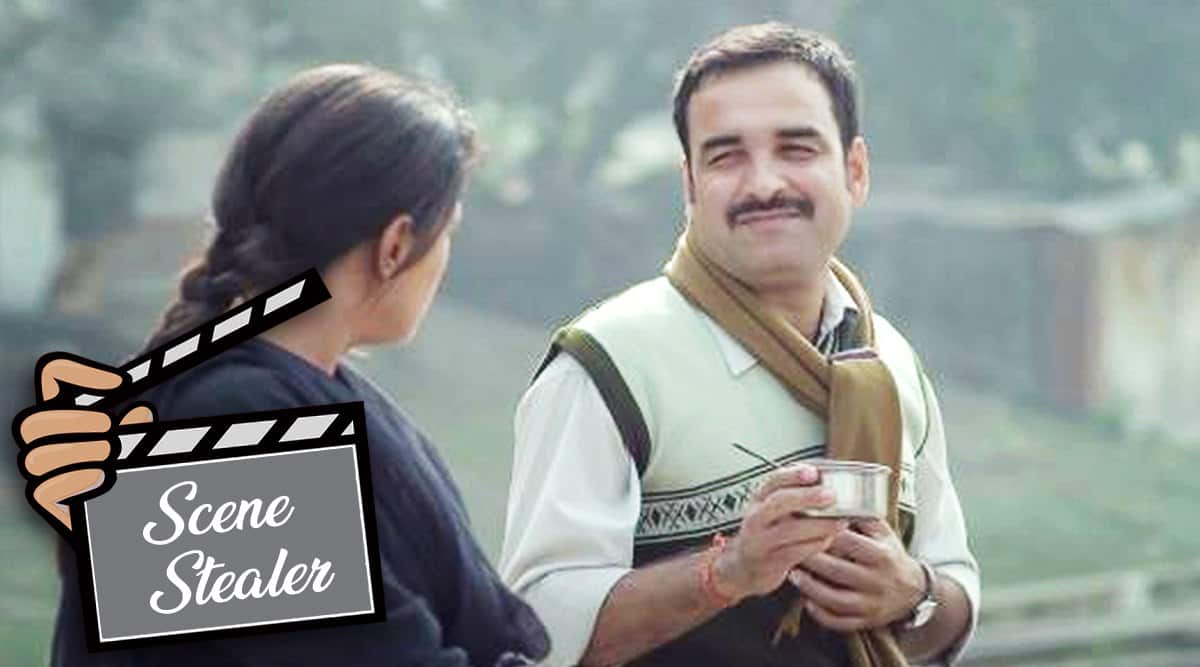 It is rare to find a genuine father-son memorable moment in Hindi cinema. Traditionally too, in our society, men have a non-emotive relationship with their children, thanks to the inherent patriarchal concepts that have been engrained within us from the moment we take birth. ‘Men don’t cry, they don’t show affection to anyone who is from the same sex, related or otherwise’ etc etc.

But in the 2015 release Masaan, we see a truly sweet bond that Pankaj Tripathi‘s Sadhya Ji seems to share with his father, and this we are able to gather even though the said part does not feature the father at all. In the 1-minute clip where we see Sadhya (Tripathi) interact with Richa Chadha’s Devi, as he proceeds to offer her some kheer during their lunch break, he speaks in a loving tone about his father and the dessert he has made for him.
- Advertisement -

“Hamare pitaji kehte hai, jo kheer nahi khaya, wo manushya yoni mein hone ka puranta fayda nahi uthaya (My father says, the one who has not had kheer, has not really taken full advantage of his short human existence),” Tripathi‘s seemingly simple and easy-going Sadhya says at one point. The line, though brief and shorn of adjectives, says a lot about the dynamic father-son share. The fact that Sadhya’s father cooks his son’s favoured dish, and then the son adorably boasts about it to a slightly amused stranger-colleague at work, tells us this is no conventional father-son bond. So much is said without actually saying a lot. The scene is short, but sweet, like the kheer it mentions.

In yet another comical bit in the same act, Tripathi’s Sadhya ji responds to Richa’s query about where his father resides: “Nahi, hum pitaji kay sath rehte hai, pitaji akele rehte hai (I live with my father. My father lives alone),” and then he hurriedly proceeds to explain what he means — “Matlab, din mein akele rehte hain (He lives alone during the day, when I go for work).” When asked about what was his interpretation of the bit, Pankaj Tripathi told indianexpress.com, “It’s black humour,” elaborating that it means parents need constant companionship after reaching a certain age. That’s what the word ‘akele’ signifies here, the actor added, therefore making the moment both sad and funny.

Knowing Tripathi’s theatre background, one would assume that there was a lot of improvisation involved, but the actor revealed that everything ‘was on paper,’ in screenwriter Varun Grover’s writing. So did he get any notes then? “No notes, Varun (Grover) had said the character reads Vinod Kumar Shukla’s books, Sadhya Ji is like the character from his books. Plus, Vinod Kumar has been my favourite writer, and as soon as Varun said that he is like one of his characters, I understood the brief. It became very easy to do my job after that. You can even spot him (Sadhya) reading one of his books in a scene, Diwar Mein Ek Khidki Rehti Thi. So when I got to know Sadhya belonged to that world, my job instantly became easier.”

But Sadhya Ji was hardly in the movie. One would think that an actor of Pankaj’s caliber would have wanted a meatier, larger material to play with. However, Tripathi was interested in Sadhya’s character from the word go — “I wanted to do Sadhya ji. I was initially offered the role of Richa’s father. It was a small part, but I was immediately taken by it. And whatever I felt at the moment, has luckily been transformed on screen, which is why are talking about it right now.”

We agree, Pankaj Tripathi, we agree.