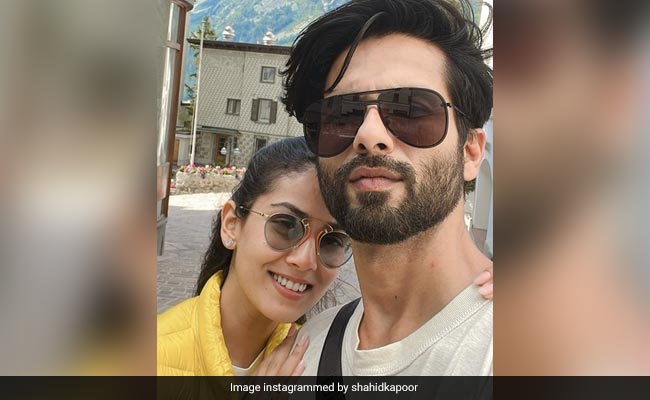 Shahid Kapoor and Mira Rajput, who are currently on holiday, are celebrating their 7th wedding anniversary today (July 7). On the special occasion, Shahid dropped a picture with his wife Mira on his Instagram handle along with a sweet note calling her a “legend”. He wrote, “7 down baby. Happy anni you made it through 7 hard long years. You a survivor. You a LEGEND ..”. Shahid Kapoor and Mira Rajput got married in 2015 and are now parents to two adorable kids, Misha and Zain.

Mira Rajput also shared an adorable picture from her Switzerland diaries on her Instagram handle, wishing the “love of her life”. In the image, they can be seen basking in the sun as they pose for the camera. Shahid looks uber cool in a grey sweatshirt paired with brown pants, while Mira, who’s resting her head on Shahid’s shoulder, looks pretty in a black t-shirt and blue jeans. Mira wrote, “The love of my life. Happy 7 baby I love you beyond the itch and back”. Check out the post below:

Meanwhile, Shahid Kapoor and Mira Rajput were holidaying in Europe with kids Misha and Zain before jetting off to London. The power couple shared several pictures on their respective Instagram handles from their trip to Switzerland and Italy. Check out the posts below:

Soon after Mira Rajput checked in London, she shared a post on her Instagram handle, enjoying the summer sitting under a tree and watching the ducks. She captioned the post as, “Mama’s day off,” followed by a rainbow emoticon.

On the work front, Shahid Kapoor was last seen in Jersey, co-starring Mrunal Thakur. Next, he will be seen making his OTT debut with Raj and DK’s Farzi, co-starring Vijay Sethupathi.