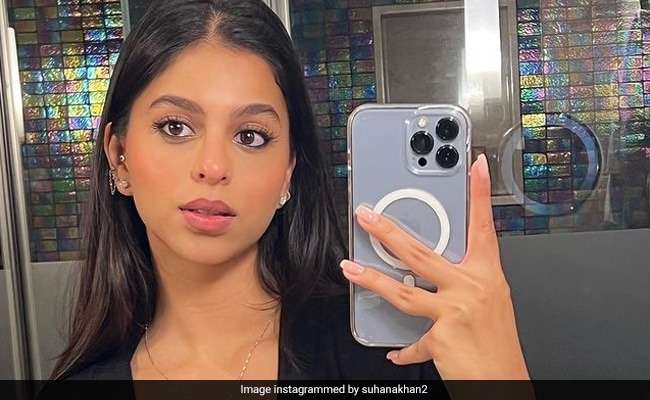 Shah Rukh Khan’s daughter Suhana Khan has treated her Insta family to a new picture of herself and its oh-so-pretty. Suhana, who will be soon making her Bollywood debut with The Archies, shared a beautiful mirror selfie in a black ensemble with a plunging neckline. In the image, she is sporting dewy makeup and has left her hair loose. Sharing the picture, she wrote, “Get ready w me!”. Soon after she shared the post, her friends flooded the comment section. Her BFF Ananya Panday wrote, “Bambi,” while Shanaya dropped two heart emoticons and wrote, “suuuu,” followed by a lovestruck emoticon. Suhana’s The Archies co-star Khushi Kapoor commented, “Cute,” followed by a love-struck emoticon.

Suhana Khan will be making her acting debut with Zoya Akhtar’s The Archies, a Hindi adaptation of the popular comic of the same name. The movie also stars Amitabh Bachchan’s grandson Agastya Nanda, Khushi Kapoor, Mihir Ahuja, Yuvraj Menda and Dot in the lead.

On Tuesday, Suhana Khan was snapped in the city with her The Archies co-star Agastya Nanda and his mom Shweta Bachchan. Check out the video below:

A few weeks ago, Suhana Khan shared several pictures with her co-stars from the sets of The Archies and dropped an emoticon in the caption. In the images, Suhana can be seen in a black crop top paired with blue jeans. The images also feature, Khushi Kapoor, Vedang Raina and Yuvraj Menda.

Also, Suhana Khan celebrated her birthday on the sets of The Archies. The actress, who turned 22 on May 24, shared several pictures from the birthday party. In the images, Suhana looks beautiful in an orange dress. In the captions, she wrote, “22/22”

The Archies will release next year on Netflix.