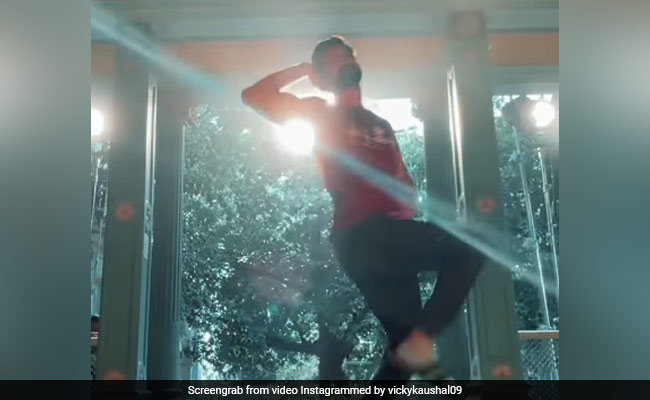 New Delhi: On Monday, Vicky Kaushal posted a video where he shows off his moves from a popular music track Rowdy Baby on his Instagram account. Vicky Kaushal can be seen wearing a t-shirt and a pant as he dances to the track. Sharing the video, Vicky wrote: “What monday blues?,” along with hashtags like #setlife and #bestlife. On Sunday, Vicky Kaushal and Katrina Kaif completed their one-month anniversary. The couple shared the pictures on their respective social media accounts. Vicky Kaushal and Katrina Kaif are currently staying in their ​new residence in Mumbai.

The couple got married in an intimate ceremony at the Six Senses Fort Barwara in Rajasthan. Vicky Kaushal and Katrina Kaif are neighbours to cricketer Virat Kohli and actress Anushka Sharma who stay in the same building. Right after, Katrina and Vicky dropped their wedding pictures, actress Anushka Sharma shared an Instagram story, where she welcomed the newly-wed. “Congratulations to both of you beautiful people! Wishing you guys a lifetime of togetherness, love and understanding. Also glad you are finally married so that now you can move into your house soon and we can stop hearing construction sounds,” wrote Anushka.

In terms of work, Vicky Kaushal was last seen in Sardar Udham. The National Award-winning actor will also be next seen in Field Marshal Sam Manekshaw’s biopic. The actor has also signed another film with Uri director Aditya Dhar, in which he will also be seen playing the role of the Mahabharata character Ashwatthama. Vicky Kaushal featured in films like Uri: The Surgical Strike, Sanju, and Lust Stories among more.