HomeBollywoodWhen You Are Sanya Malhotra, Even Improv Dance Sessions Are Utterly Fab
Bollywood

When You Are Sanya Malhotra, Even Improv Dance Sessions Are Utterly Fab 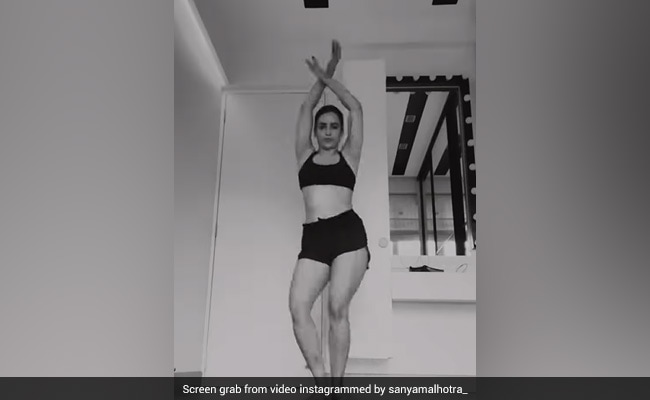 Sanya Malhotra in a still from the video. (courtesy: sanyamalhotra_)

New Delhi: Leave it to Sanya Malhotra to ace every dance video. The reason we brought this up today is because the actress shared a video from an improv dance session on Instagram on Wednesday and it is super impressive. Sanya, who can be seen grooving to Rosalia and J Balvin’s smash hit Brillo, captioned the post: “Improv on anything Rosalia says.” She added the hashtag #musictomyears to her post. In the comments section of Sanya’s post, her Dangal co-star Fatima Sana Shaikh dropped multiple heart emojis. Sanya’s Pataakha co-star Radhika Madana wrote “Wooof,” adding fire emoji. Choreographer Zaid Darbar commented on Sanya’s post: “Dancing pretty.”

Because one post is not enough to showcase what a fabulous dancer Sanya Malhotra is. A couple of months ago, she shared this video of herself along with choreographer Shazeb Sheikh. “Can someone wefast some Naulakkhas to us,” she hilariously captioned the post.

Sanya Malhotra does not need a studio to dance. The world is her stage and we are here to cheer for her.

POV: the Dangal star ruling the dance floor as always.

Samantha Ruth Prabhu’s song and Sanya dancing to it. Doesn’t get any better. Does it?

Sanya Malhotra has an impressive line-up of films. Her next projects is The Great Indian Kitchen Hindi remake with Harman Baweja and Meghna Gulzar’s film on Field Marshal Sam Manekshaw, co-starring Vicky Kaushal and Fatima Sana Shaikh. She will also feature in Netflix’s Kathal. The actress was last seen in HIT – The First Case with Rajkummar Rao. She also starred in Love Hostel, co-starring Bobby Deol and Vikrant Massey earlier this year.