After Nope, Atypical Alien Movies from Killer Klowns to They Live 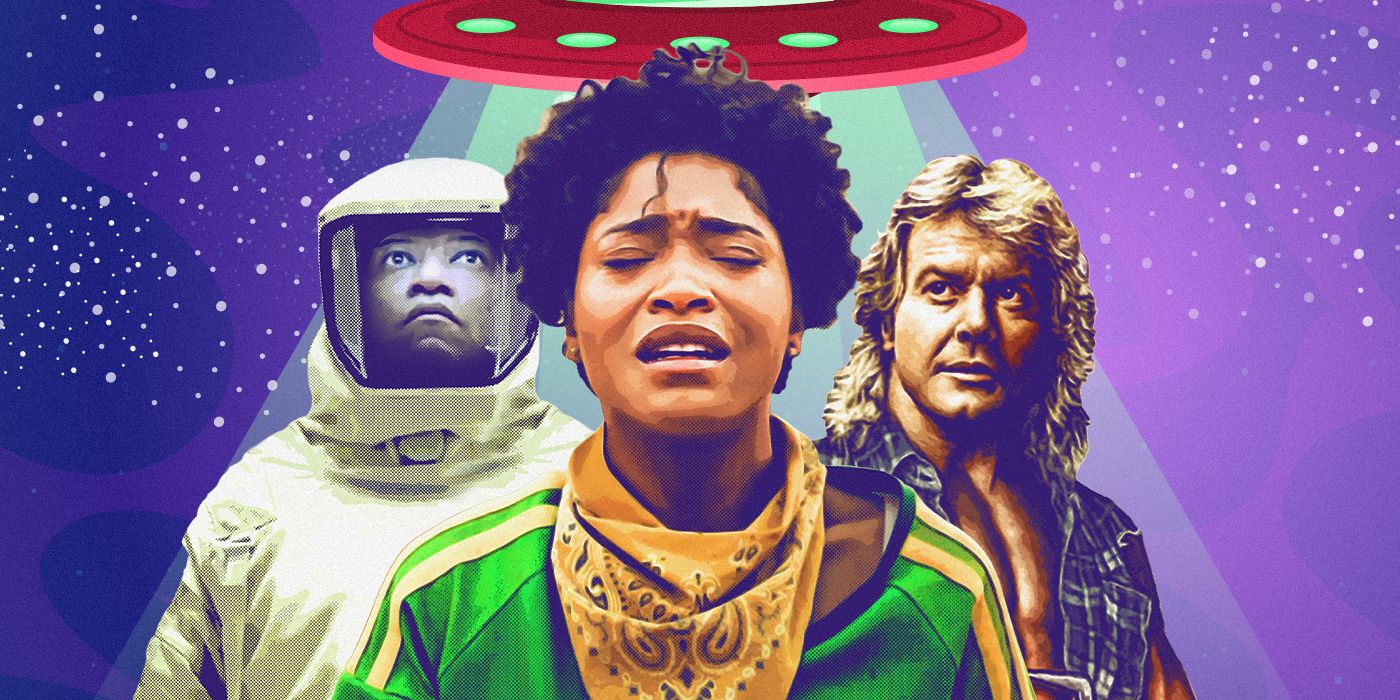 Nope is many things. It’s horror and a western. It’s about a Black family trying to reclaim fame Hollywood denied or limited them. It’s heavy in symbolism asking for rewatches. It’s also about a UFO that’s full of surprises. And all of this ends up making Nope a unique addition to the sci-fi genre. There are beloved tropes put into the story, many of which director Jordan Peele changes up with new ideas.

But Peele isn’t the only one who showed us that extraterrestrials aren’t “little green men;” some have tentacles and others appear as monstrous clowns. Abductions aren’t always about getting beamed up to a flying saucer. Characters may not even realize they’re trapped until it’s too late. In the following movies from the United States, Mexico, and Brazil, say goodbye to the space threats you think you know so well. There is always something new to fear.

The Brother from Another Planet (1984)

In Harlem, an alien resembling a Black man goes on the run from bounty hunters. Known as the Brother (Joe Morton), this lost E.T. is mute and has to learn quickly how to survive on Earth. The opening takes place at night in NYC, but one might not even realize. Shadows and sound design resemble an otherworldly environment, which isn’t too far from what the city can offer. Experiencing the trials the Brother goes through can be both funny and frustrating. Fast moving, stern New Yorkers don’t have time to be patient with the Brother. Other than three-toed feet, his average appearance is a major plot point.

It’s not by any mistake the bounty hunters out to get him look like white men. While the Brother eases into society, the bounty hunters are too different. Assimilation is not on their agenda. They shriek in unison. They will stop at nothing until they get what they’re after. When they head into a bar to interrogate citizens, all the Black workers and patrons stare in bewilderment at them. The Brother fits in much more than they ever could. “White folks get stranger all the time,” a patron mutters as the door closes behind the hunters.

Obey. Consume. Sleep. The alien invasion is not underway, it’s already long over. Skeletal, bug-face aliens are everywhere. And the public is living under their manipulation without even realizing it. In this unique and weird John Carpenter classic, subliminal messages are full of insidious intent. Drifter Nada (Roddy Piper) comes upon a pair of sunglasses. Wearing them aren’t meant to protect his eyes; it allows him to see the other side to the world he’s grown up in.

Keith David’s Frank unwillingly gets pulled in as an ally. Matching dark shades with Nada, Frank preps for battle. This doesn’t come easy. First, the two men tussle. The brawl of strength is full of kicks, so many bruises, and hitting the ground hard. They keep getting back up and go at it for more. The brawl between the two is outrageous and hilarious. It also makes perfect sense for what the whole movie is about. Nada and Frank are more than ready to beat up each other again and again, while ignoring the larger problem at hand.

A meteorite crashes into Earth, somewhere in the countryside of Mexico. So far, so good at keeping up with familiar sci-fi scenarios. That’s where everything shifts from well-tread territory. The movie from director Amat Escalante is more concerned about the domestic struggles of its characters than focusing on a creature expelled from outer space. Alejandra (Ruth Ramos) is stuck in a failing marriage, her husband only using her for sex. For all his homophobic rants, he’s also having an affair with her brother Fabián (Eden Villavicencio).

Lust and unrequited desires are major themes at play. Verónica (Simone Bucio) puts herself in the middle of the siblings. For a long time, she enjoyed the pleasures the alien gave her, but after getting injured, she’s forced to stay away. The tentacled creature, when shown in full, is disturbingly fascinating. It appears like something from the tentacle erotica of Japan, capable of pleasure or pain. There are more horrifying dangers out there and Escalante doesn’t want it to be ignored. Alejandra’s husband is accused of a homophobic attack. The newspapers put out a salacious headline covering it and the perpetrator’s parents are more ashamed their son might be gay than that he perpetrated a violent crime.

RELATED: The Ever-Broadening Scope of Jordan Peele’s Movies, From ‘Get Out’ to ‘Nope’

Jupiter’s Claim in Nope is not as festive as this band of murderous space invaders. The ship they land on Earth is full of carnival imagery. Don’t be fooled, it’s a funhouse from hell. If Pennywise didn’t do enough harm the image of the clown community, the aliens from Killer Klowns From Outer Space take the form of deranged-looking clowns. And they absolutely do not come in peace. They want to kill, in all kinds of ways. A balloon animal is not innocent, turning into a hound dog to sniff out prey. Cotton candy will leave a bad taste in your mouth after it cocoons victims in its deathtrap. This is very much a B-movie that has fun with the wacky villains.

A village deals with a UFO in the skies and a different kind of invasion in this slow burn western. Everyone protects themselves in a close-knit village, and they are struggling. A greedy mayor hordes the water, forcing villagers to resort to a water tank delivery. Brazilian directors Kleber Mendonça Filho and Juliano Dornelles incorporate the history of their country, putting it on a smaller scale within the town of Bacurau. It has faced threats and lived on. Now there’s a new one, the villagers losing cell service and unable to find their town on a GPS map being early warning signs.

The village is full of colorful characters, like the town’s doctor Domingas (Sônia Braga), who deeply cares for the community, and Lunga (Silvero Pereira),a flamboyant revolutionary in hiding. The “aliens” bringing the danger are untrustworthy foreigners. A group of white Americans, led by Michael (Udo Kier), are armed with machine guns and heinous motives. Alien invasions are frightening, especially when they aren’t fantasy concepts and involve very mortal enemies.

Framed as an episode of a Twilight Zone-like series, the simple story packs a boost of urgency. Fay (Sierra McCormick) is a teen curious about her new tape recorder and a switchboard operator. An ordinary night shift turns into something unusual when she picks up a frequency. Everett (Jake Horowitz) doesn’t hear anything interfere with his radio show, but he believes Fay. Soon, the two hurry to find the answers in this character- and dialogue-heavy tale full of precise, frantic cinematography.

A memorable long-take moves the camera across town, visualizing how removed Everett and Fay are from everyone, literally and figuratively. They aren’t the only ones. An older woman (Gail Cronauer) has been ostracized by neighbors after apparently experiencing a UFO abduction. A caller (Bruce Davis) on Everett’s show details how the government used Black and Mexican soldiers at an Area 51-like wreck due to the public not trusting them if they talked. In Fay and Everett’s passion for tech, the unknown frequency is like a beacon calling out to them. It may just promise an escape.

MIT students Nic (Brenton Thwaites), Haley (Olivia Cooke), and Jonah (Beau Knapp) close in on a hacker that almost got them expelled. Everything goes wrong very quickly. Haley is yanked into the sky before a blinding white light traps the young men. When Nic wakes, he’s stuck in a facility. Dr. Damon (Laurence Fishburne), menacing and cryptic, oversees him, wearing a complete hazmat suit. Life is about to get a lot stranger.

Nic had to walk with forearm crutches. Now, his legs are amputated, fit with powerful prosthetics made from alien technology. His friends have been changed as well. Damon explains they made contact with an EBE (extraterrestrial biological entity). “Oh, it’s just blood,” the doctor says after inspecting Nic’s head. It shouldn’t sound ominous. Nic and his friends are not the supposed EBE, yet they’re treated as such. Are they still human? Eventually, Nic escapes, only to get lost further down a rabbit hole. A score (“2.3.5.41”) by Nima Fakhrara and Free the Robots plays in the end, a Bach sample altered like Nic’s body, matching the nightmare the final shot holds.