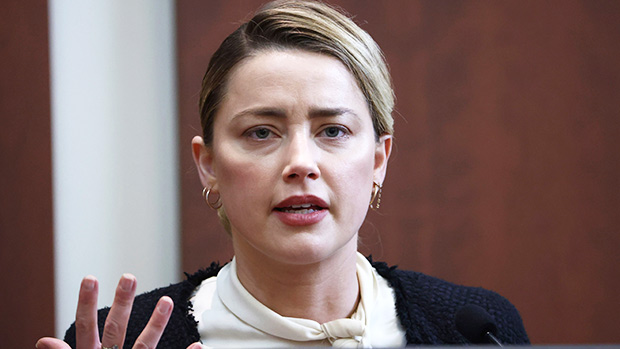 Amber made the accusation in court, but the judge didn’t let her lawyers use the image as evidence since it wasn’t submitted in time, according to TMZ. She claimed that the alleged incident took place in the living room of his loft. “He wears a lot of rings. I remember kind of just feeling like my lip went into my teeth, and it got a little blood on the wall,” she reportedly said in court. “Just that simple, a little bit of blood on the wall.”

In turn, Johnny’s team has denied that the incident took place and also questioned the validity of the photo. His lawyers, as well as TMZ, have confirmed that the photo is from 2012 — despite Amber claiming in the ongoing defamation case that the first violent incident with Johnny occurred in 2013. Apparently, Amber was wrong about the dates and her therapist records reportedly confirmed that the alleged abuse started in 2012.

The famous exes have accused one another of physical abuse in the weeks since their trial started at the Fairfax, Virginia courthouse. On May 5, Amber testified that Fantastic Beasts actor threatened to kill her during a fight. Her time on the stand also included disturbing accounts of allegedly being hit for the first time by Johnny and an explicit account of being cavity searched for drugs. She also described the actor allegedly kicking her during a fight about James Franco.

Johnny, meanwhile, already took the stand and stood by past statements that he hadn’t abused his ex-wife. The Pirates of the Caribbean actor also spoke about his increased alcohol consumption during his and Amber’s relationship. He even detailed an incident where he claimed that a part of his middle finger was severed during an argument with Amber, after she allegedly threw a bottle at him and hit his finger.

Johnny is suing Amber for $50 million defamation for writing an op-ed piece in The Washington Post in 2019 that claimed she was a victim of domestic violence. Johnny denies all allegations, but Amber countersued him for $100 million, claiming he orchestrated a smear campaign against her. The trial is in recess until May 16.