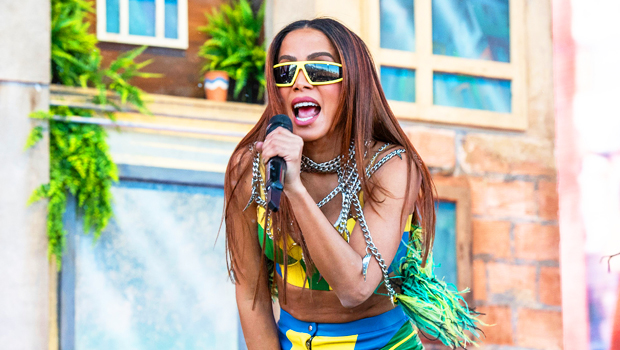 
Anitta, 29, wowed during her latest performance at Coachella and even locked lips with a dancer on stage! The Brazilian singer changed into three different sexy outfits that accentuated her figure as she rocked it in front of an enthusiastic crowd. The eye-catching outfits included a denim bra and shorts set with fishnet tights, a green, yellow, and blue bustier and matching shorts, and a long-sleeved vivid bodysuit that had a cut-out in the back. She also accessorized with sunglasses as her hair was down.

Throughout her highly energetic time on stage, she showed off epic dance moves alongside her female kissing partner and other dancers, and at one point, she hopped onto a shirtless male dancer. She looked thrilled to be on stage every second and flashed a lot of smiles as she did what she does best.

Before Anitta’s latest performance, she made headlines for first performing at Coachella last weekend. She joined Saweetie and even Snoop Dogg for some incredible moments and looked just as fantastic and confident.

When Anitta’s not turning heads at Coachella, she’s doing so on social media. The beauty often posts gorgeous pics of herself in various looks, including some that were included in a post where she revealed her excitement for Coachella’s second week. In the several snapshots, she posed in a black tube top and pants and added a black Versace baseball cap with a scarf underneath.

“Woke up already waiting for Coachella 2nd week. I’ll be there again delivering party, show, performance, voice, fashion, twerk, dance, twerk again, fun and much more… follow me 😎,” she wrote in the caption.

Shortly after her first weekend at Coachella, she also took to social media to post more incredible stage pics and wrote, “Still can’t get over myselfffffff… ahhhh” right alongside them.