HomeHollywoodBen Affleck Wraps His Arm Around J.Lo’s Child Emme, 14, As They...
Hollywood 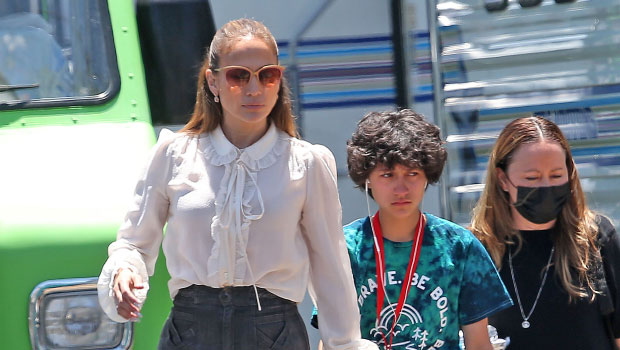 
Ben Affleck, 49, got a special treat during his workday on June 27. The actor was visited by his fiancee Jennifer Lopez, 52, and her child Emme Muniz, 14, as he was on set filming an untitled Nike movie. The singer looked gorgeous in a white fancy long-sleeved top with a ruffled collar and a tie section in the front as well as dark blue jeans and black heels while her mini me looked adorable in a blue and green tie-dye t-shirt, blue jeans, and black sneakers. At one point during the visit, Ben was spotted lovingly wrapping his arm around Emme as all three walked together under the sunshine.

The sweet moment comes after Jennifer and Emme, whom she shares with ex Marc Anthony, performed together at the Blue Diamond Gala at Dodgers Stadium earlier this month. The doting mom introduced her duet partner with they/them pronouns, leading many to believe that’s what the teen prefers to go by. “The last time we performed together was in a big stadium like this and I ask them to sing with me all the time, and they won’t. So this is a very special occasion. They are very, very busy. Booked. And pricey,” J.Lo joked on stage before Emme came out.

In addition to Jennifer and Emme, Ben and his son Samuel, 10, have also made headlines recently. The doting dad was out at a car dealership with his youngest child, whom he shares with ex Jennifer Garner, when they had a little mishap. At one point, Samuel got in the front seat of a $225,000 tester Lamborghini while the engine was running and appeared to put it in reverse. The car, which reportedly had his future stepmom in the backseat, then rolled back into the front of a parked BMW, as can be seen in a video posted by Daily Mail.

The concerned dad gave Samuel a hug after the incident and Jennifer joined them outside. He was also seen talking to workers at the dealership and looking at the two collided vehicles to see the damage that was caused. Since Ben and Jennifer were with Samuel the entire time, the whole incident seemed like nothing more than an unfortunate accident, but luckily, it didn’t appear that anyone got hurt.

In addition to Samuel, Ben shares two daughters, Violet, 16, and Seraphina, 13, with his ex-wife. Jennifer also shares son Max, 14, who is Emme’s twin, with her ex-husband.

Share
Facebook
Twitter
Pinterest
WhatsApp
Linkedin
ReddIt
Email
Tumblr
Telegram
Previous articleMegan Fox & MGK Twin In Bubblegum Pink At His ‘Life In Pink’ Movie Premiere
Next articleBritney Spears Says She Was ‘Losing It’ During Vegas Residency: ‘I Wanted To Crawl In A Hole’