Best Antonio Banderas Performances From Desperado to The Mask of Zorro 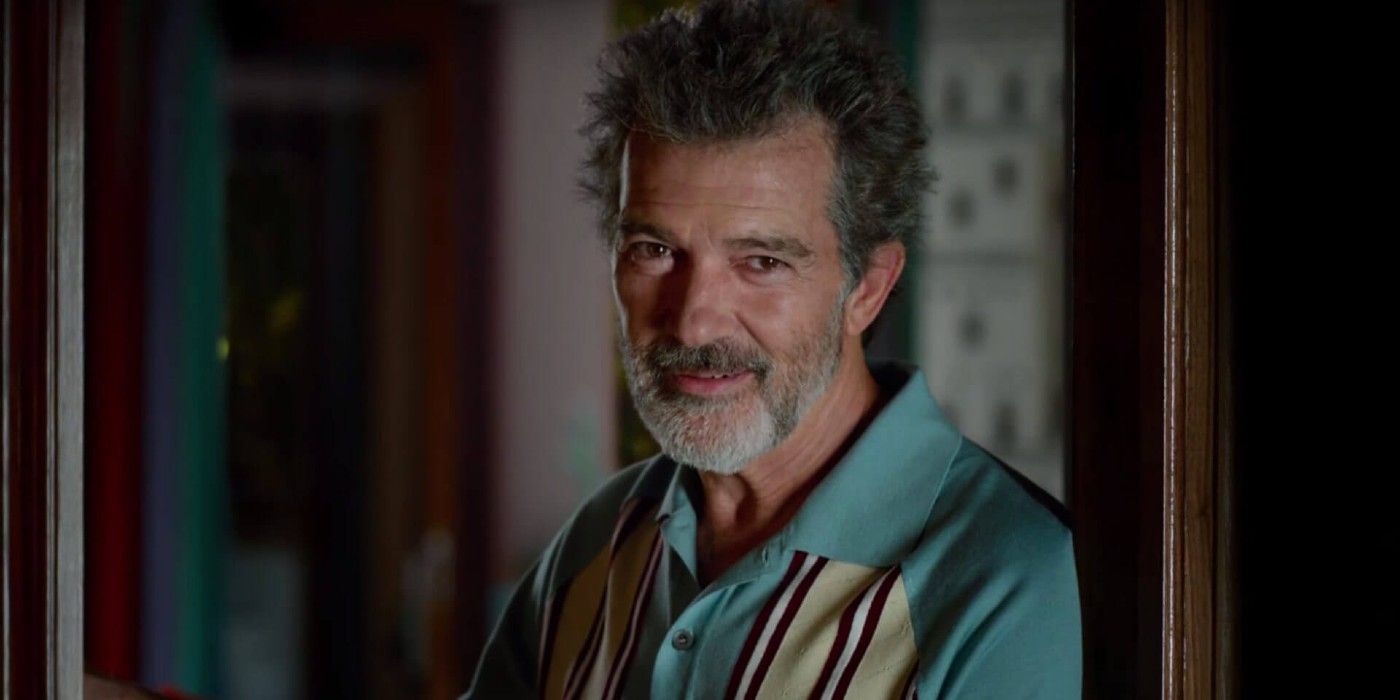 One of a select few Spanish actors to achieve equally successful careers in both their Spain and Hollywood, Antonio Banderas has had an impressive and eclectic portfolio of performances. Between humble beginnings in character roles and TV movies, a decades-long collaboration with cinema legend Pedro Almodóvar, and wide recognition in mainstream American film, Banderas has proven time and time again to be a versatile performer. His filmography has seen him dance, sing, voice-act, carry projects in lead roles, make an impact in secondary parts, and bring his own unique style to comedy, drama, horror, thriller, and action. Here is a selection of great movies – both big and small – in which Banderas proves his range and unfaltering screen presence.

This nifty little sleeper hit by Brian DePalma is considered something of a cult classic these days and gave Banderas plenty to sink his teeth into. He plays a paparazzo caught up in a web of lies and manipulation by a sexy diamond thief who has stolen the identity of a dead woman. He clearly recognizes the need to stay just a shade on this side of seriousness and has a rip-roaring time with some pretty corny dialogue and a plot that doesn’t quite hold together. Although a flashy and quite silly movie, it’s an undeniably enjoyable one bolstered by the likes of Rebecca Romijn in a double role and Peter Coyote, who is no stranger to silly erotic movies.

An enjoyable chapter of the mid-00s trend for movies about dance and giving troubled kids a new lease on life, Take the Lead is the true story of Pierre DuLaine, an inspirational teacher who established social programs for young dancers. Banderas brings much charm and wit to a not-exactly-original narrative and shows a remarkable aptitude for dancing with tangible passion and sensuality, glimpses of which he showed in Evita over a decade earlier. Although the movie in itself goes through the standard motions and does everything you expect it to, it is really nicely brought to life by Banderas, whose personality radiates and makes for a very endearing couple of hours, and an ensemble of talented young actors who were mostly unknown but included the likes of Dante Basco, Yaya DaCosta, and Jenna Dewan.

Banderas has the title role in this made-for-TV passion project about the real-life production of a biopic in which Mexican general Pancho Villa played himself. In the vein of The Disaster Artist or Feud: Bette and Joan, this movie is a fun and irreverent look at a historically significant movie and the many wacky events that brought it into existence. Banderas gives a complex and nuanced performance as a man battling many external forces, loyalties, and interests, giving him room for wit, intensity, and sensitivity alike. Great performances from the always-reliable Jim Broadbent and Alan Arkin round off this engrossing TV film and make it one to remember, even if it wasn’t particularly notable in its time.

This erotic dark comedy is another Almodóvar piece, with stunning visuals and a strong supporting cast. Banderas plays Ángel, a matador in training with a kink for murder and a problem with vertigo, a combination that leads him to confess to attacks he did not commit. Arguably the role that really allowed Banderas to cut his teeth in the sexy stranger archetype that he would later be known for, the movie walks a strange tightrope and wavers between the serious and the ludicrous. In this sense, it is a compelling early entry in Almodóvar’s portfolio too, in which seedlings of the irreverence that would later become the director’s trademark are firmly planted.

This warm, funny Spanish-language film is one of Banderas’ earlier leading roles. It is a simple story about a group of young people sharing a small apartment, and the shenanigans that ensue during their marijuana runs to Morocco. One of the more light-hearted performances on this list, he plays Alberto, an animated and somewhat uptight police officer who doesn’t allow his job to interfere with his penchant for grass or his housemates’ efforts to obtain it. It’s a charming, laid-back movie that allows Banderas to kick back with friends and bounce off of a number of equally endearing characters. Bajarse al moro is a great relaxing summer movie with plenty of quirky comedy and relatable relationships to enjoy.

In this unforgettably dark psychological thriller by Almodóvar, Banderas plays a brilliant but tormented surgeon who spends his days experimenting on his live-in muse/guinea pig/lover to create the perfect human skin that can withstand any damage. Through perfectly paced flashbacks, it is revealed just who his muse is, how she came to be in his life, and why he is so obsessed with his work. Here Banderas really masters the antihero, whose actions are undoubtedly heartless or even cruel, but motivated by a compelling combination of personal trauma, revenge, and helplessness. This shocking and unnerving film really packs a punch and drops a twist no viewer would ever see coming.

Season 2 of the National Geographic series Genius boasts the impeccable casting of Antonio Banderas as Pablo Picasso. He gives another darkly musing performance as the controversial artist which requires all the gusto and seething passion he can muster, with a touch of cheeky charm. It’s a role that suits him so well at this stage in his life, that plays to all his strengths, and is supported by a compelling script and beautiful cinematography. The episodic format gives the lead actors plenty of room to breathe and grow, and it proves an engaging watch from start to finish. In the age of streaming and the renaissance of the serial drama, here’s to hoping for more TV projects in Banderas’ future.

Among the handful of family movies Banderas has acted in over the years, none is more imaginative and in touch with the childish mind than Spy Kids. One of several collaborations with Robert Rodriguez, this fabulously wacky action movie is about a brother and sister who learn that their parents (Banderas and Carla Gugino) are top secret agents, and in order to save them from a maniacal villain, they must follow in their footsteps and become spies themselves. Here, Banderas gets to parody some of the slick action roles he has played before, and have a laugh with some brilliant material, sets, and costars, including Alan Cumming, Cheech Marin, and Danny Trejo. A true gem that is enjoyable for kids and adults alike, Spy Kids helped introduce younger viewers to Banderas and a host of other great actors who didn’t often venture into family film. It’s a timelessly fun movie that is always a pleasure to watch.


Armand in Interview With The Vampire (1994)

Banderas crops up halfway through Neil Jordan’s masterful gothic horror to play a secondary but pivotal part in the endless vampiric life of Louis (Brad Pitt). He plays Armand, a fellow vampire from whom Louis learns the answer to all his questions: that there are no answers. A quietly manipulative and alluring figure, Banderas’ best moments are those in which the two men talk about the lack of meaning or higher power and find themselves united in their hopelessness. Next to a flamboyant characterization by Tom Cruise, Banderas’ quieter and more calculating demeanor is an understated delight that helps bring gravity to the story. He is just one of many great actors giving powerhouse performances in this rich supernatural tragedy that’s definitely worth revisiting.

If one performance cements Banderas as a triple threat, it’s that of Che in Alan Parker’s take on the Lloyd Webber-Rice musical Evita. It’s a demanding role that requires power as a singer, grace as a dancer, and the ability to carry the majority of the story as an actor. Che cynically narrates the story of Argentinian First Lady Eva Perón (Madonna), challenging her fantasies and providing a biting commentary on the social and political implications of her work. Madonna’s self-professed lust for Banderas affords them tangible on-screen chemistry as they battle out a love-hate relationship, always seeking to outwit and seduce the other into submission. Undoubtedly the best incarnation of Ché in the show’s forty-year history, Banderas charges at this role and proves himself an actor worthy of both stage and screen.

Marking Banderas’ first Academy Award nomination, this pained and passionate semi-autobiography is a wonderful culmination of his decades-long collaboration with director Pedro Almodóvar. Banderas plays Salvador, a filmmaker whose declining physical and mental health and a reunion with a figure from his past push him into a spiral of reflection and self-destruction. It makes tremendous use of that brooding, introspective quality that Banderas is so good at, asking the audience to offer a supportive ear to a vulnerable man in the midst of his anguish. Far from an easy watch given its damaged emotional core, but engaging and satisfying nonetheless, Pain and Glory is a must-watch for any Banderas or Almodóvar fan.

Taking over the role of El Mariachi from Carlos Gallardo for the second chapter of Robert Rodriguez’s Mexico Trilogy, Desperado established Banderas as not only a leading man, but a compelling action star. He plays a wronged man whose trauma at the hands of a drug kingpin drives him to seek violent revenge, giving a dark, brooding performance with fire in its belly and plenty left in the tank for what would go on to be the final installment of the series, Once Upon A Time In Mexico. As always, Banderas’ simmering undercurrent of torment is perfectly complemented by Rodriguez’s trademark flashy, bombastic visuals and eccentricity. This proves to be another brilliant collaboration with a uniquely stylish Latino director whose projects are always a joy to watch.

Alejandro Murrieta in The Mask Of Zorro (1998)

Arguably some distant spiritual progeny of El Mariachi, Banderas was the perfect choice for the title role of Martin Campbell’s The Mask of Zorro. He is Alejandro, a down-and-out man haunted by the death of his brother at the hands of a corrupt American captain, who is taken under the wing of an aging fugitive folk hero and trained to be the people’s next savior. Banderas gets to lean into the fun and flamboyance of a swashbuckler movie, while getting plenty of dramatic moments and some wonderful costars to sound off of, including Anthony Hopkins as the original Zorro and Catherine Zeta-Jones as his formidable love interest. Just one of many Zorro movies, but easily one of the most engrossing and enjoyable, The Mask of Zorro is brought to its full potential with Banderas in the saddle.