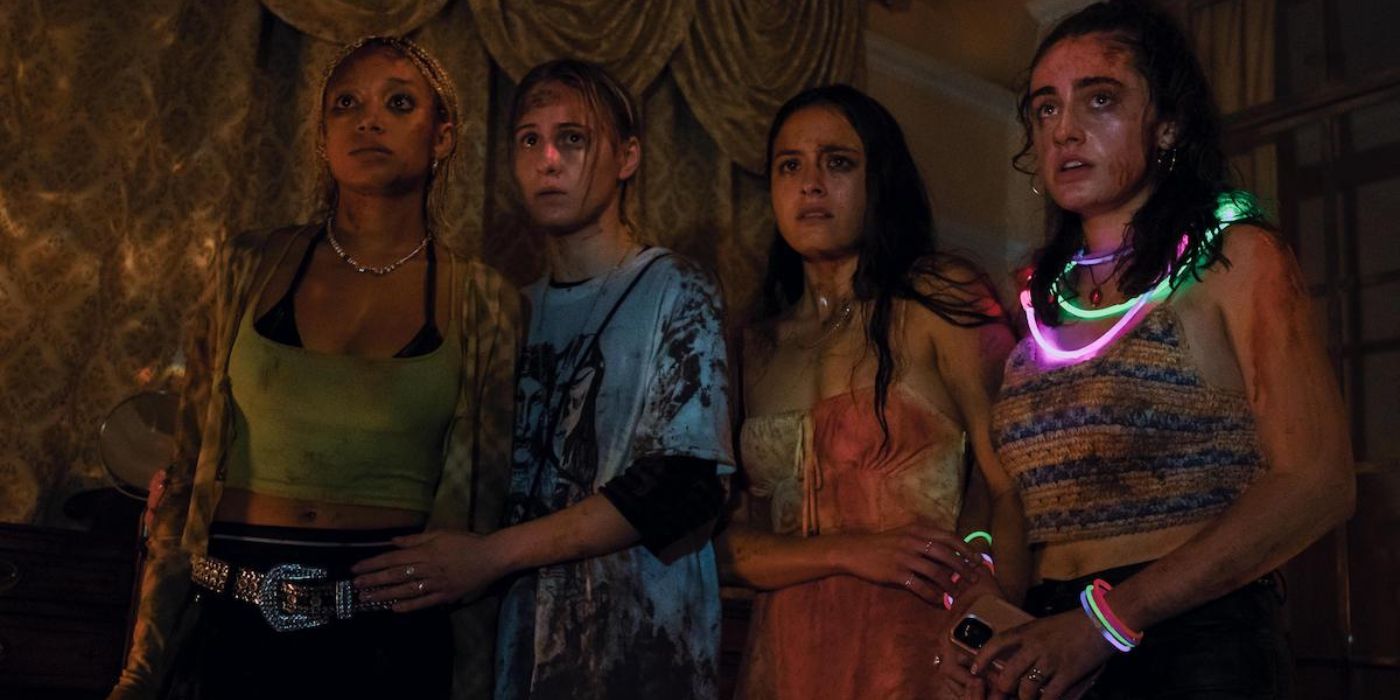 Editor’s Note: The following contains Bodies Bodies Bodies spoilers.The latest horror film from A24, Bodies Bodies Bodies, is finally being unleashed on the world after first premiering back in March at SXSW. A wacky slasher whodunit for a new generation, it centers on a group of seven friends who get trapped at a swanky mansion when a hurricane strikes. They then all decide to play a game: bodies bodies bodies. This is essentially a riff on a classic party game like Werewolf, where there is a murderer amongst the group that they will all have to discover. This killer will tap people on the back and “kill” them. If a body is discovered, you shout out the name of the game and gather to vote on who you think it is. Sounds simple, right? Wrong, dead wrong. This seemingly fun gathering has many unexpected twists in store that will have everyone at each other’s throats with no way out.


When the friends discover someone has actually died, they will be in for a night of escalating paranoia and violence that they might not survive. The film is one that is aggressively poking fun at both itself and its young characters. It skewers them in both a literal sense and a thematic one, revealing the truth behind the images they’ve carefully constructed about themselves. Nothing is what it seems in this film, both when it comes to what is actually threatening the friends and who all these characters actually are. So let’s break down what this all means when the film reaches its conclusion so, if you haven’t seen it, bookmark this for later to delve into everything from its tense start to its bloody finale.

RELATED: Every A24 Horror Movie Ranked From Worst to Best

First, we need to establish a bit of groundwork of who all our players are. The central focus is the relatively new couple of Sophie (Amandla Sternberg) and Bee (Maria Bakalova). They both arrive last at the gathering, surprising everyone already there. This is because Sophie has recently been in rehab and didn’t tell them they were coming. When they arrive at the family mansion of rich kid David (Pete Davidson), he seems a little annoyed. However, they are soon greeted by the rest of their friends. Be it the insecure Emma (Chase Sui Wonders), the observant Jordan (Myha’la Herrold), or the aggravating Alice (Rachel Sennott), everyone seems a bit uncertain about their presence though they still mostly play nice. One person is missing, the unseen Max, who left in anger and who we will get to later. The other odd person out of note is Greg (Lee Pace), a mysterious older man that Alice recently met on Tinder. Soon, he and David get into a confrontation while playing the game. It ends without violence as both of them go off on their own. That is until David becomes the first to die.


From the moment he is discovered outside with his throat cut, everything begins to unravel. First, they believe that Greg must have done it and go to confront him. He seems perplexed by the accusation though soon becomes aggressive in defending himself. As a result, Bee bludgeons him to death with a weight. Then, uncertain if they were correct, the remaining characters begin to die off. Emma is found dead at the bottom of the stairs, and they suspect someone pushed her. Jordan, Alice, and Sophie then turn on Bee who they believe is lying about who she really is. They aren’t entirely incorrect, as she hasn’t been telling the whole truth about her current job, or finishing college. Still, they kick her out into the storm. While outside, she notices that Jordan has gotten a gun that she is hiding. When this is revealed, a scuffle ensues and Alice is shot multiple times before dying. Sophie and Bee then approach Jordan. A fight occurs, and she falls off of a balcony, eventually dying on the ground below. It then is only Sophie and Bee, though the latter suspects the former of being unfaithful. This culminates in a fight over a phone by the pool to determine if this is true. It is there that they discover something that reveals all of what set off this night of killing and violence.


Covered in mud, yet still functioning, is David’s phone. It is looping a TikTok video he was trying to take of himself using a sword to slice the cork off of a bottle of alcohol. He had seen Greg do it before and clearly was trying to replicate it, though Greg starts drunkenly cutting towards himself. Sure enough, he cuts his own throat and stumbles out of frame. The beginning of all this was not a murder, but a completely accidental self-inflicted maiming. Stunned into silence, Sophie and Bee sit in silence as a new face appears. None other than Max (Conner O’Malley) walks up to observe the devastation that has taken place while he was gone. It is a fitting punchline that lays out how, through all the chaos of the film, it was all about the joke. Not just in the chuckle sense, though there are plenty of those, but in something more cutting. All the death was not because of some vicious murderer hiding their true nature as they killed the friends off one by one. The more haunting and humorous reality is that all the friends were the ones who set this in motion. It was their own infighting that served as the gasoline for the fire of fear that consumed them. Every death was either an accident or one they carried out themselves, driven by the dread that only existed in their minds.


It’s a very good joke to end on as it rewards a repeat viewing by recontextualizing everything. All the tension that we saw in the beginning, built upon long-simmering resentment, was what proved to be the downfall of the friends. The various social forces that shaped them, especially those experienced by the extremely online generation, are pilloried by this revelation. All the arguments they happen over the course of the night become more honest as they give voice to the underlying dysfunction that had been left unspoken up until then. While the film is first and foremost a horror-comedy, where it gets the material makes this ending as hilariously explosive as it is revealing. It excavates all the ways its characters are insecure or struggling, grounding the experience of the ending in finally laying all these cards on the table. Much of this is tied to class, as it reveals how this privilege and wealth warped all of their brains to the point that they couldn’t see the reality in front of them. While Bee was also caught up in the chaos, it is notable that she is the only one who could see clearly and ends up discovering the truth. That it comes too late with almost everyone dead is a playfully poetic way to conclude. It is a film that sets out to poke fun at everything and everyone within it, culminating in this final punchline that crystallizes all its absurdity.