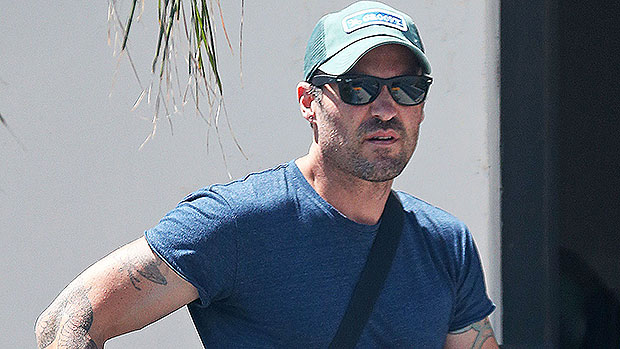 
Brian Austin Green revealed he’s suffering from ulcerative colitis, causing a dramatic weight loss. The actor, 48, lost “like 20 pounds” he confirmed in an interview on Good Morning America that aired on Thursday, May 19. Brian said he had “dealt with ulcerative colitis a few times,” but added this round was “a real rough experience.”

“As long as I can keep things within my system that my body doesn’t think I’m poisoning it with … then it doesn’t fight back.” @withBAGpod and @SharnaBurgess open up to @kayleehartung about the actor’s recent battle with ulcerative colitis. https://t.co/qrwjBZayIg pic.twitter.com/Okwrh2JQ73

Ulcerative colitis is an autoimmune condition that is also a type of irritable bowel disease (IBD). It can cause both inflammation and ulcers in the rectum and large intestine per Web MD. Other symptoms include diarrhea mixed with blood and severe abdominal pain leading additional effects like to fever, anemia and weight loss.

Brian has been dealing with the disease amid Sharna Burgess‘ first pregnancy, which the couple announced in Feb. 2022. Sharna, 36, has since confirmed that the pair are expecting a boy.

Brian Austin Green & Sharna Burgess: Photos Of The Couple With His Kids & More

“Sharna had never experienced it at all,” he said in the interview. “Sharna was amazing. Six, seven months pregnant, taking care of my three young kids  because I was pretty bedridden for a while,” he said, referencing kids Noah, 9, Bodhi, 8, and Journey, 5, with ex-wife Megan Fox.

“I didn’t realize how debilitating it was until I saw him and watched weight drop off him,” the pregnant Dancing With The Stars alum explained.

Brian, who is best known for his role on Beverly Hills, 90210 and the 2019 spinoff, also shared the steps he’s taken to get better — including going dairy and gluten free “as much as possible” to help with flare-ups which kept him in bed for all of April.

“It’s really just dietary, like, as long as I can keep things within my system that my body doesn’t think I’m poisoning it with, then it doesn’t fight back,” he added. “I would eat food, and literally it was like, my body didn’t process any of that. So then, when you start playing catch up with, like, staying on top of being hydrated enough, that’s such a battle.”