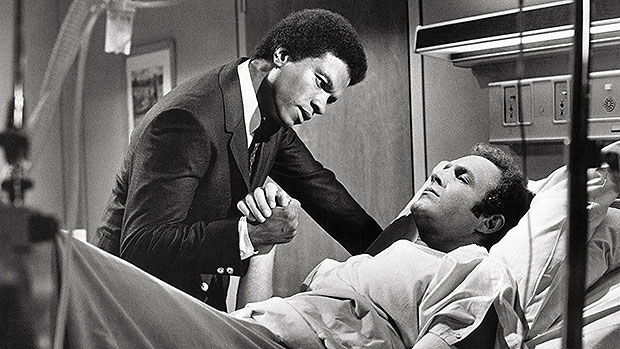 
Billy Dee Williams paid tribute to his late friend James Caan with a sweet tribute. The actor, now 85, shared a funny photo of the two at a gym in recent years. In the snap, James is seen smiling and sitting on Billy’s lap before or after a workout. “Team Mates and friends till the end. RIP Jimmy,” Billy wrote, adding the hashtag “#jamescaan.”

Billy and James have a longstanding friendship that spans decades. The two originally worked on the 1971’s Brian’s Song, which is a 1971 ABC Movie of the Week. The film told the emotional story of Brian Picollo, played by Caan, who was a Chicago Bears football player who was diagnosed with terminal cancer after going pro in 1965. The film is told through the eyes of his close friend and teammate Gale Sayers, who was played by Billy. Thanks to rave reviews and viewership, the movie was released in theaters by Columbia Pictures.

Beyond Brian’s Song, James is known for a slew of other legendary movies like The Godfather where he portrayed Sonny Corleone. The movie got him a Golden Globe award, as well as an Oscar nomination for Best Supporting Actor the same year. He reprised the role in the 1974 sequel, The Godfather II. Beyond that, he was also in Funny Lady, and appeared in the series Las Vegas with Josh Duhamel from 2003 to 2008.

James Caan’s Life In Photos: Remember ‘The Godfather’ Actor After His Death At 82

It is with great sadness that we inform you of the passing of Jimmy on the evening of July 6.

The family appreciates the outpouring of love and heartfelt condolences and asks that you continue to respect their privacy during this difficult time.

His passing was confirmed via a statement from his family posted to his Twitter account on July 7. “It is with great sadness that we inform you of the passing of Jimmy on the evening of July 6,” the statement read. “The family appreciates the outpouring of love and heartfelt condolences and asks that you continue to respect their privacy during this difficult time,” the statement also read.

James’ Godfather co-stars Al Pacino and Robert De Niro also issued statements following the announcement of his death. Al said to Our Source, “Jimmy was my fictional brother and my lifelong friend. It’s hard to believe that he won’t be in the world anymore because he was so alive and daring. A great actor, a brilliant director and my dear friend. I’m gonna miss him.” De Niro added that he was “very very sad to hear about Jimmy’s passing.”