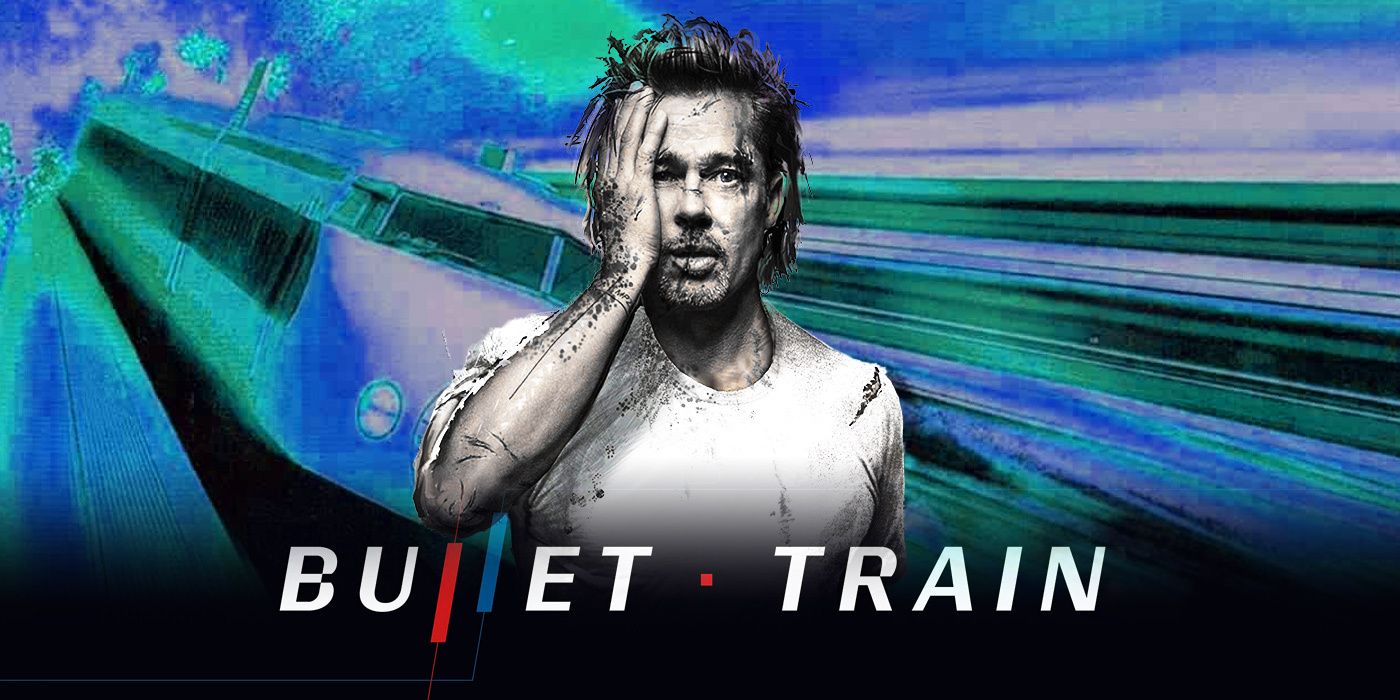 The highly-anticipated Bullet Train is a new movie by David Leitch that features a star-studded ensemble. The film is based on the Japanese novel Maria Beetle by Kōtarō Isaka and focuses on a trained killer known as Ladybug. His mission is to retrieve a mysterious briefcase that is onboard a bullet train leaving Tokyo. However, he is subsequently held up when he discovers several other assassins on board who have suspiciously similar objectives. They all soon realize that their very presence on the train is no coincidence and each of them begins to wonder who might actually be pulling the strings. As the train gets closer to its destination, it becomes anyone’s game as they must all use their killer instincts to survive and make it to the final stop.


An intensely mysterious and entertaining film, Bullet Train is scheduled for release on August 5, 2022, and seems to have a nice balance of comedy and fast-paced action judging by its trailer and reviews. The fact that it has such an amazing cast certainly can’t hurt either, so let’s take a closer look at who we can expect to see in what could possibly be the movie of the summer.

In Bullet Train, Brad Pitt is leading an all-star crew starring as Ladybug, a highly-experienced assassin who wants to finally retire, but not before he is pulled back in for another job. His objective takes him onboard a train that seems to have a number of other dangerous passengers.


With his movies having grossed a total of over $5 billion, it is easy to see why Pitt is one of the most successful and talented actors around. A legitimate movie star whose career spans almost four decades, Pitt has received a multitude of awards for his work. Having first gained worldwide recognition for his role as a young drifter in Thelma & Louise in 1991, he went on to star in some of the most iconic movies of the ’90s and early ’00s. You may know him from his performances in Fight Club, Interview with the Vampire, Troy, World War Z, Inglorious Basterds, or perhaps the Ocean’s trilogy, but even these movies barely scratch the surface of his mile-long resume. Most recently, Pitt starred in The Lost City and Quentin Tarantino’s Once Upon a Time in Hollywood, appearing opposite Leonardo DiCaprio and Margot Robbie in the latter, for which he received an Academy Award and Golden Globe for Best Supporting Actor.


Joey King stars as The Prince, one of the killers aboard the train. She is a British assassin who deceptively poses as a schoolgirl. King has been acting from a very young age and has appeared in movies such as Crazy, Stupid, Love, The Dark Knight Rises, Independence Day: Resurgence, The Kissing Booth, and more recently the action-fantasy drama The Princess, starring alongside Dominic Cooper and Olga Kurylenko.

King will also be starring in Netflix’s upcoming movie The Uglies based on the Scott Westerfeld novel of the same name. It is a science-fiction drama based on a post-apocalyptic, dystopian world where teenagers are physically enhanced or altered to fit society’s ideas of beauty. King is also an executive producer on the project.

Following The Prince in this awesome but deadly lineup is Tangerine, another British assassin played by Aaron Taylor-Johnson. No stranger to the action genre, Taylor-Johnson is probably most known for his performances as Pietro Maximoff in Avengers: Age of Ultron and as a teen superhero in Kick-Ass. He has also played some of the world’s most iconic figures such as John Lennon and Charlie Chaplin and has worked with some of the best directors working today, including Joe Wright and Christopher Nolan.

Aaron is set to join Sony’s Spider-Man Universe (SSU) in the upcoming movie Kraven the Hunter in the title role. The movie will be the fourth in the franchise and is currently scheduled for release in January 2023.

Starring as Tangerine’s counterpart and partner in crime is Brian Tyree Henry as the assassin known as Lemon. Tyree Henry is an accomplished actor in both television, film, and theater and is widely recognized as Alfred “paper boi” Miles in the comedy-drama series Atlanta. He has starred in other hit TV shows such as Boardwalk Empire and This Is Us, as well as appearing in movies like Widows, Joker, Godzilla Vs Kong, The Woman in the Window, and the MCU movie Eternals.


We can expect to see Tyree Henry starring as boxer and coach Jason Crutchfield in Flint Strong, the upcoming biopic about Claressa Shields and her gold medal victory in the 2012 Summer Olympics. The film will also star Ryan Destiny and Judy Greer.

Andrew Koji plays Yuichi Kimura, a Japanese assassin. Koji is a British-Japanese actor, martial artist, stuntman, and filmmaker. He is best known for the crime-drama series Warrior as the lead role Ah Sahm, a martial art prodigy during the Tong wars in the late 19th century.

An upcoming project for Koji is the action-thriller Boy Kills World, starring opposite Bill Skarsgård, Jessica Rothe, and Yayan Ruhian.

Bad Bunny as The Wolf

The Wolf is another dangerous hitman on board the bullet train who has a personal ongoing feud with Ladybug. He is portrayed by the Latin megastar Bad Bunny. He is a Puerto Rican rapper and singer, who has been gradually building a collection of acting credits. After exercising his comedy chops in Saturday Night Live, he has gone on to star in the crime-drama series Narcos: Mexico and more recently in Fast & Furious 9 in a supporting role. It has also been announced that he will be joining the SSU in El Muerto as the lead character, who is a wrestler with superhuman strength.

The Elder, played by Hiroyuki Sanada, is a seasoned hitman and father of Yuichi Kimura. These days Sanada is considered to be the Jackie Chan or Shahrukh Khan of his native Japan, and he has also made an effortless crossover to mainstream Hollywood. A classically trained actor and impressive martial artist, Sanada’s career spans over five decades, having made his debut in 1966 in the Ninkyo Yakuza film Game of Chance.

By the time Western audiences were introduced to Sanada in 2003’s The Last Samurai, he was already an established icon in Japanese cinema. He has starred in various television series and movies such as Westworld, Lost, Rush Hour 3, The Wolverine, 47 Ronin, Avengers: Endgame, and the Mortal Kombat reboot. More recently, he starred in Netflix’s Army of the Dead as well as its sequel Army of Thieves. He is set to appear in the upcoming fourth installment of the John Wick film series, scheduled for release in 2023.

Michael Shannon is starring as the leader of a criminal organization who is most likely another major antagonist Ladybug will have to face. Michael Shannon is an American actor, musician, and producer who has starred in a wide variety of films, starting from his very first movie role in Groundhog Day. His work includes Pearl Harbor, 8 Mile, Bad Boys II, Revolutionary Road, The Shape of Water, Nocturnal Animals, Knives Out, and Man of Steel.


Shannon is due to star next in the David O. Russell comedy-mystery movie Amsterdam, which is about three friends who become prime suspects in a murder case in the 1930s. The film has a huge ensemble cast with Christian Bale, Margot Robbie, Zoe Saldana, Chris Rock, Rami Malek, and Robert De Niro to name just a few.

Playing Ladybug’s contact and handler who sends him on his ill-fated mission is Sandra Bullock. An iconic American actress who received her major breakthrough in the 1994 movie Speed opposite Keanu Reeves, Bullock is well-established and has sunk her teeth in every kind of movie genre, including but not limited to comedy and action.

You may know her from movies such as While You Were Sleeping, Practical Magic, A Time to Kill, Miss Congeniality, Gravity, Bird Box, and The Blind Side, for which she won an Academy Award and Golden Globe Award for Best Actress. She more recently starred in the action-adventure movie The Lost City, opposite Channing Tatum, Daniel Radcliffe, and Bullet Train co-star Brad Pitt.