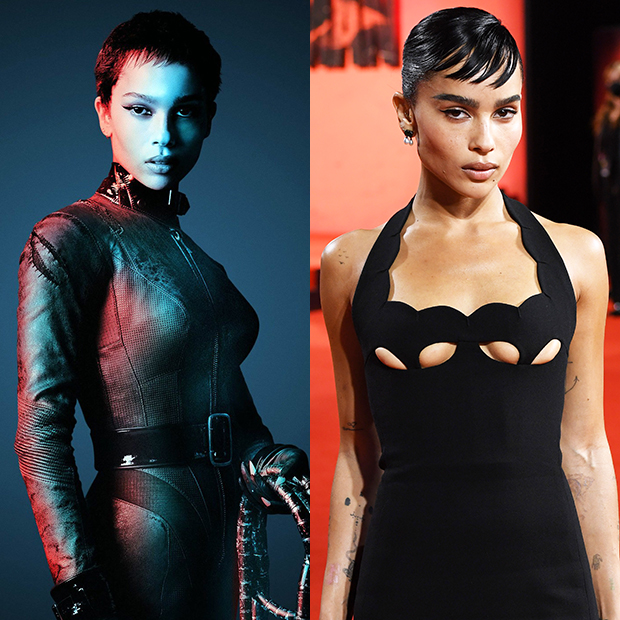 
Meow… Zoë Kravitz is stepping into the iconic role of Catwoman in ‘The Batman.’ She’s not the first talented actress to take on the legendary character. Let’s take a look back at the fierce women who’ve played the Cat.

Catwoman is one of the most famous comic book characters of all time. She’s the one who always keeps Batman on his toes and tempts him at every turn. Catwoman is back on the big screen in The Batman, with Zoë Kravitz assuming the role of the feline fatale.

Zoë joins a long list of incredible women who have transformed into Catwoman, a.k.a. Selina Kyle. From Catwoman’s early days on TV to her many film interpretations, each actress makes the character their own. Take a look at the Catwoman actresses through the years.

Zoë, 33, takes on the Catwoman mantle in The Batman, the latest film adaptation about The Dark Knight. Zoë stars alongside Robert Pattinson, who plays Bruce Wayne/Batman. The actress revealed that her interpretation of Catwoman includes an “emotional journey.”

She told Total Film, “To see a person like Selina really get in touch with her power and become Catwoman? That’s a journey that I’m really interested in exploring. We haven’t quite seen that yet. We usually meet Catwoman, and it’s either a very quick transformation – an overnight thing – or she’s already there. And so to find the emotional journey that brings her to the place where she is making the choice to be this person is what I’m really excited about.”

Zoë was asked if Selina was bisexual in a recent interview with Pedestrian when talking about Selina’s friend Anika. “That’s definitely the way I interpreted that, that they had some kind of romantic relationship,” the actress said.

Prior to The Batman, Zoë was best known for her role on Big Little Lies and High Fidelity. She is the daughter of Lisa Bonet and Lenny Kravitz.

Michelle Pfeiffer, 63, made her Catwoman debut in the 1992 film Batman Returns alongside Michael Keaton and Danny DeVito. Her portrayal of the sexy femme fatale has gone as one of her best performances. However, Michelle wasn’t originally cast as Catwoman. Annette Bening was cast as Catwoman but had to drop out when she became pregnant. That’s when Michelle stepped in, and the rest is history.

Michelle’s Catwoman costume instantly became iconic. The skintight latex outfit wasn’t the easiest to perform in, though. “It was the most uncomfortable costume I’ve ever been in,” Michelle told THR. “They had to powder me down, help me inside and then vacuum-pack the suit. They’d paint it with a silicon-based finish to give it its trademark shine. I had those claws, and I was always catching them in things. The face mask was smashing my face and choking me…we had a lot of bugs to work out.”

Michael is set to reprise his role as Batman in the upcoming film The Flash. Michelle would be down to bring her version of Catwoman back as well. “I would if anyone asked me but no one’s asked me yet,” Michelle told ScreenRant in 2021. Make it happen, people!

Anne Hathaway, 39, starred as Selina Kyle/Catwoman in 2012’s The Dark Knight Rises. The third film in Christopher Nolan’s trilogy featured Christian Bale as The Dark Knight. Anne’s performance was praised and the film was a massive blockbuster.

Ahead of Zoë’s debut as Catwoman, Anne raved to Collider that Zoë was “a perfect choice” for the character. Anne also sent her love to Zoë when she was officially cast in 2019. “The biggest congrats to @zoeisabellakravitz on landing the role of a lifetime. Well, one life anyway…⁣⁣ Enjoy the ride, Selina,” Anne wrote on Instagram.

Catwoman got her first (and so far only) standalone movie in 2004 with Halle Berry, 55, taking on the role. While the movie ended up being a box-office bomb, the Oscar winner has no regrets about playing the legendary character.

“Everybody around me said, ‘Girl, don’t do it. It’s going to be the death of you. It’s going to end your career.’ But guess what I did? I followed my intuition and I did a movie called Catwoman and it bombed miserably,” Halle said in 2018. “While it failed to most people, it wasn’t a failure for me because I met so many interesting people that I wouldn’t have met otherwise, I learned two forms of martial arts and I learned not what to do.” She added that she also made “a sh*t-load of money that changed my life.”

Camren Bicondova, 22, played a young Selina Kyle/Catwoman in the FOX series Gotham, which ran for 5 seasons from 2014 to 2019. The series followed a young Bruce Wayne after the death of his parents and before he becomes Batman.

“The only three words that I can describe this experience with are awesome, an honor and grateful,” Camren told Collider in 2014. “Every synonym of those three words is me, at the moment.  It’s great.  I’m getting to show a side of Selina Kyle that nobody’s ever seen before, and that’s cool. I feel pretty special.”

Both Bruce and Selina are teens during the majority of Gotham’s run. The series finale featured a time jump and Lili Simmons assumed the role of adult Catwoman.

Julie Newmar, now 88, made history as the first woman to play Catwoman onscreen. She starred for two seasons as Catwoman in the Batman TV series. At the time, Adam West played the Caped Crusader. Julie set the bar high for the character in the ’60s and remains an inspiration.

“I’m realizing that through all the shows I’ve done — the television, film and stage — all the mediums I’ve worked in, Catwoman’s costume was the one that allowed me to tell the story through my body,” Julie told Bring Me The News. “The words were brilliant, and funny on top of that. The producer hired the right people to do all the lighting, to do this, that and the other, and it was the right time in the right decade. It all worked.”

Eartha Kitt played Catwoman in the third and final season of the Batman TV series. Even though she only played the character for a handful of episodes, her performance is a memorable one. She made history as the first Black Catwoman. Eartha passed away in 2008 at the age of 82 after a battle with colon cancer.