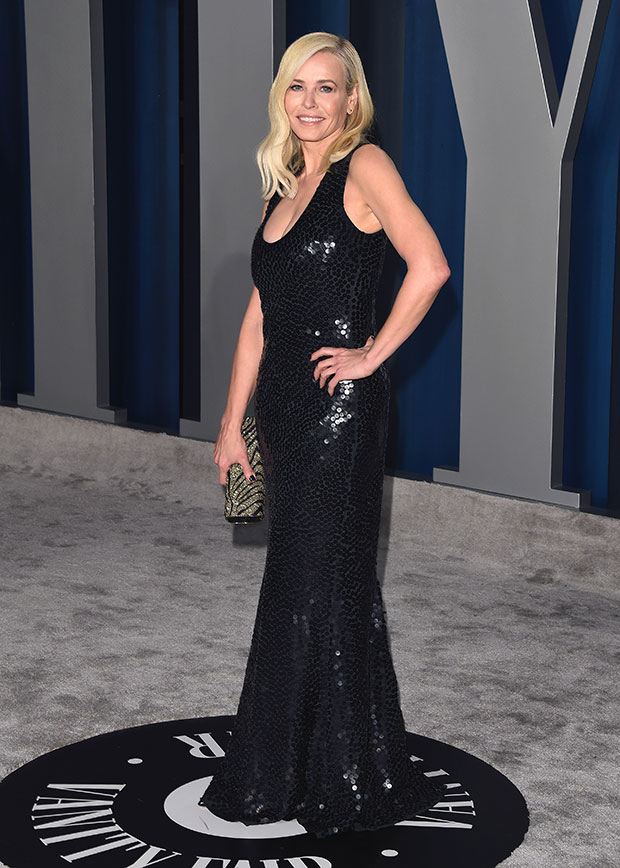 
The comedian stunned in a hilarious new photo, where she showed herself having plenty of fun while hitting the slopes!

The cold won’t keep Chelsea Handler down! The 46-year-old comedian dressed for the beach in a marijuana leaf-covered bikini while out skiing on Tuesday January 11. She announced that she was celebrating one of her upcoming Los Angeles stand-up shows selling out, and she looked ready to drink and smoke, as she held a bottle of booze and a jar full of weed as she dashed down the mountain!

Other than the bikini, Chelsea had some clothing that was more fitting for the snow, including a cozy-looking beanie over her braided hair and high socks poking out of the tops of her ski boots. In the other slides, she shared all of her tour dates for the “Vaccinated And Horny” tour. After announcing the new show that was added, she got a little silly, sharing that she just happened to find the booze and pot laying in the snow. ” To celebrate, I thought why not ski through the woods, and then found a mason jar of weed and my favorite vodka!” she wrote in the caption. “Who knows how this got here.”

While she may have busted out the bikini to hit the ski slopes, the Chelsea Lately star has shown off sexy bikinis in more appropriate locations, like at the beach, when she went to Hawaii with her boyfriend Jo Koy. Back in September, she also shared a photo of herself sitting on a beach in Mallorca, Spain as her relationship with Jo was budding. In fact, that was where she first announced that she was “in love” with the comic.

Speaking of her boyfriend, selling out shows isn’t the only thing Chelsea has had to celebrate lately. Her relationship with Jo has been going super well. After the pair went Instagram official back in October, a source close to the comedian revealed to Entrendz Showbizz that both the comics are crazy about each other. “They are cutely obsessed with each other. She even brags that he buys her tampons.” Yep, this is certainly a couple that can go the distance together!” they said.