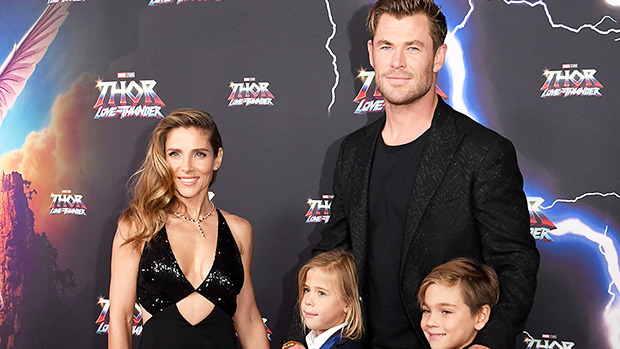 
Chris Hemsworth – Marvel OG star, adventurer, and Liam Hemsworth’s brother —  shares his only children, eldest daughter India and twin sons Tristan and Sasha, with wife Elsa Pataky, whom he married in 2010. Though a global superstar, Chris is known fo making time for his family, sharing stories and photos of his great times with his kids on his Instagram often and singing their praises in interviews.

It didn’t take long for Chris and his Fast & Furious star wife to start building their family. Two short years after marrying, they welcomed their only daughter, India. Then, two years after that, the boys came — twins Sasha and Tristan — in 2014. Since then, the pair haven’t spoken about having more kids, but rather very much enjoying the family they have now. In fact, in 2022, Chris welcomed his children into this movie world in a big way with cameos in the film Thor: Love & Thunder! Here’s everything we know about Chris and his kids!

Chris’ eldest and only daughter India was born May 11, 2012. Chris has certainly established himself to be a girl dad, as he’s often shared moments on his Instagram of them bonding or pulling out all the stops for her. Still, you won’t often actually see India, or any of his children really at big Hollywood events. For Chris and Elsa, it’s important that their kids grow up privately and as normally as possible. “I don’t want them to feel like they’re privileged in any way,” Chris told GQ magazine in 2018. “The fact that we have money and their parents are famous, that somehow they’re special, that scares me because we grew up with no money.”

All of that did change in 2022, though, when Chris’ daughter, along with his sons, made cameos in his Marvel flick, Thor: Love & Thunder. India Rose, who made her acting debut with this film, actually has a titular role, as she stars as “Love” to Thor’s “Thunder.” Her character is [SPOILER ALERT] the daughter of Christian Bale’s villainous Gorr. Through the course of the movie’s events, she eventually becomes the surrogate daughter of Thor himself! Life imitating art? That’s cute!

Time to meet the boys! In 2014, Chris and Elsa celebrated welcoming not one, but two adorable little guys into their family. With gorgeous blond hair like their mom, but often styled to look like their dad, the now 8-year-old twins seem to be growing up wanting to be just like their dad!

Case in point, like their older sister India, the twins also had roles in the Marvel movie, Thor: Love and Thunder. Given how much they look like their pops, Sasha and Tristan managed to bag the titular role, as both twins traded off playing a young Thor in the movie. The boys were so thrilled to be a part of the movie, they joined their parents  to walk the red carpet at the Sydney premiere of the latest installment in the Thor series