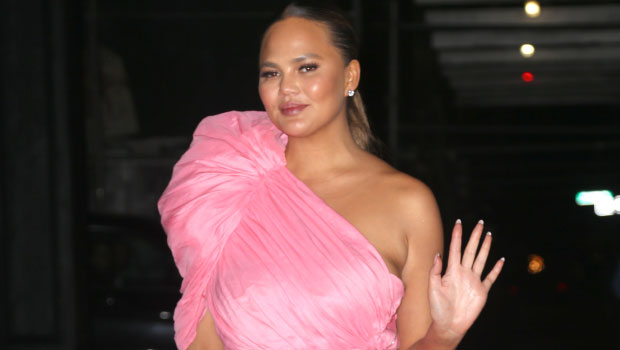 
Whether she meant to or not, Chrissy Teigen stole the spotlight from her husband John Legend during the opening night of his Las Vegas residency. Taking to her Instagram on Saturday (April 23), the cookbook author, 36, revealed exactly how she did so by posting a photo of the sensational outfit she wore in the City of Sin. Rocking a pink sequin gown featuring a high slit up the leg, Chrissy captioned the post with a bunch of heart emojis.

Chrissy and John, 43, have been going from strength to strength lately, and it appears they may even be considering a new baby to add to their brood. The veteran supermodel — who shares daughter Luna, 5, and son Miles, 3, with John — sparked the speculation after she shared a snap of needles and capsules alongside a pink cartoon uterus to her Instagram Stories recently. With the makings of an egg retrieval procedure in the post and the caption, “Here we go again,” it appeared Chrissy was teasing a pregnancy via surrogacy.

The Sports Illustrated alum would likely opt for a surrogate, as she mourned that she would never be pregnant again in December 2020, three months after losing her unborn son Jack. “I love being pregnant, so so much, and I’m sad I never will be again,” she wrote on Instagram at the time. “But I am lucky to have two amazing little ones who are transforming into big little people more and more every single day.”

In October 2020, Chrissy revealed to her fans she had recently suffered the loss of her third pregnancy. At the halfway point of her pregnancy with Jack, Chrissy was admitted to the hospital on Sept. 27, 2020, after having continual bleeding from a weakened placenta following 10 days of doctor-ordered home bedrest. In heartbreaking news, she and John lost their son Jack on Sept 30. “To our Jack – I’m so sorry that the first few moments of your life were met with so many complications, that we couldn’t give you the home you needed to survive,” Chrissy wrote on Instagram at the time. “We will always love you.”