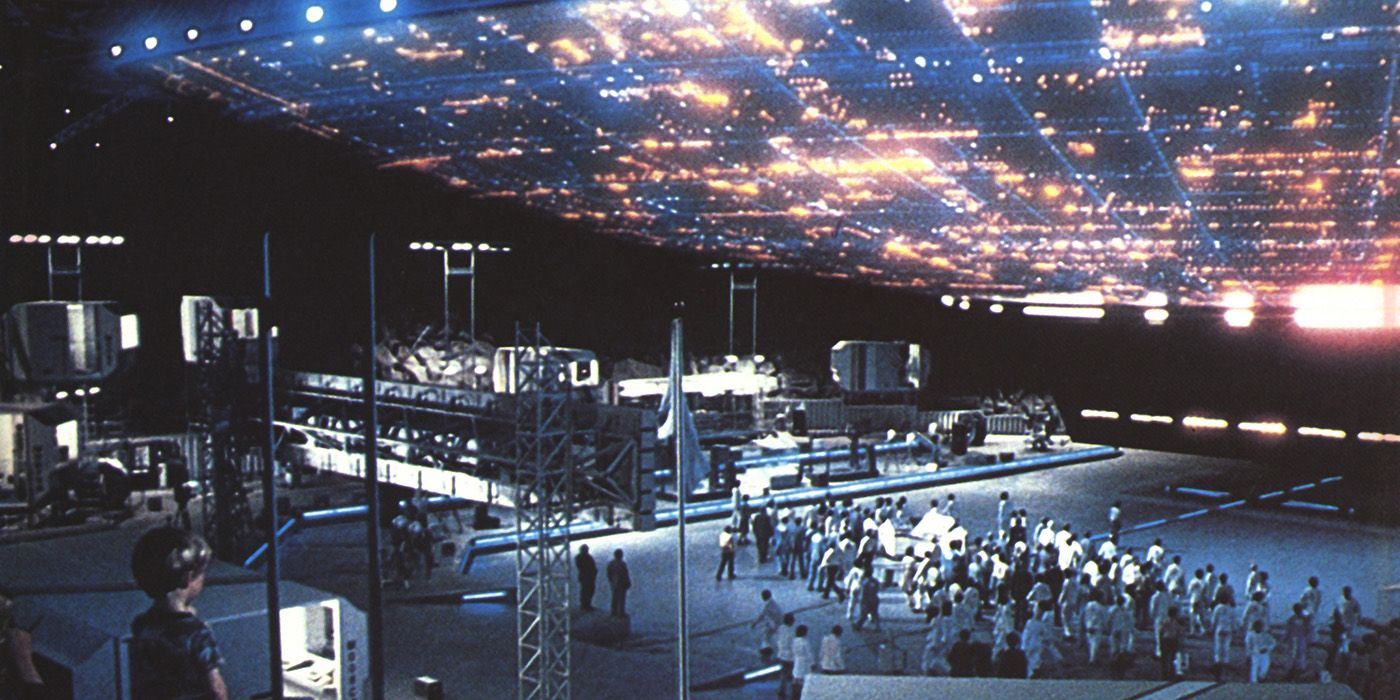 There’s no doubt that Steven Spielberg has become one of the most renowned directors on the planet, mainly for his ability to create blockbuster spectacle. Key examples include Jaws, the first Jurassic Park film, and even more recent endeavors like Ready Player One and West Side Story; all of these films feature images that have seared themselves into viewers’ brains long after the credits roll. However, there’s one film in Spielberg’s career that perfectly encapsulates his entire filmmaking ethos: the 1977 science-fiction spectacle Close Encounters of the Third Kind, which celebrates its 45th anniversary this year.


Encounters begins with a mystery: during an expedition through the Sonoran Desert, scientist Claude Lacombe (François Truffaut) and his crew discover a fleet of World War II-era planes. Though it’s been years, all the planes are in mint condition – and not a single one of them has a pilot. This, combined with finding the wreckage of the S.S. Cotopaxi in the Gobi Desert, confirms Lacombe’s suspicions that unidentified flying objects have visited the Earth. And soon he’s proven right, as various UFOs often descend to Earth and leave with humans aboard.

As the UFOs make their way to Earth, they end up changing the lives of two people. Roy Neary (Richard Dreyfuss) witnesses one of the UFOs when it flies over his truck, and Jillian Guiler (Melinda Dillon) can only watch as her son Barry (Cary Guffey) is abducted by the aliens. While Lacombe and his team attempt to make contact with the aliens, Neary grows more and more obsessed with finding the aliens — making sculptures of a strange mountain where he believes they’ll be. Eventually, this leads him to cross paths with Jillian and Lacombe, and eventually come face to face with the interstellar visitors.

Watching this film, I couldn’t help but notice a few similarities to Spielberg’s other first contact classic E.T. the Extra-Terrestrial. Both films involve a visiting race from beyond the stars. There’s a human boy who gets swept up in the process and forms a connection with the aliens. And the government is involved in a major coverup concerning the aliens. However, there are a few differences. While the government is portrayed as more of an antagonistic force in E.T., in Encounters their main concern is finding out how to communicate with the aliens. And unlike E.T., the aliens in Encounter don’t make an appearance until the very end of the film. In fact, for a science fiction film, most of the science takes a back seat to the human drama.


Said human drama is carried perfectly by Dreyfuss and Dillon, as their characters have extremely different reactions to the UFO phenomenon. Neary grows more and more obsessed with finding the UFO, to the point where his wife takes their children and leaves him. Jillian is just as driven, though her desire lies solely with getting her son back and less with making contact with an alien race. Perhaps the best scene in the film features Neary hunched over in a running shower, a look of desperation on his face. Dreyfuss sells Neary’s all-consuming obsession, as well as the destructive effects it has on him and his family. And it would mark a trend in the protagonists of Spielberg’s films, as they’re all driven by their own obsessions. See Indiana Jones and his obsession with the Ark of the Covenant in Raiders of the Lost Ark. Or even Wade Watts’ obsession with pop culture in Ready Player One. However, while those obsessions are treated as valuable, there’s nothing endearing about Neary’s.


It wouldn’t be a Spielberg film if there wasn’t some stunning imagery involved, and Encounters is not lacking in that regard. The various UFOs in the story look less like spaceships and more like flying cities; shimmering lights cover nearly every inch of the spaceships, and large towers jut out of the top. The end result is a truly ethereal image as the UFOs descend from the sky. Kudos go to the late Ralph McQuarrie, who designed the spaceship, as well as visual effects supervisor Douglas Trumbull, for achieving this effect. And topping it all off is Spielberg’s frequent musical collaborator John Williams, who delivers a rousing score that is frightening in some parts and awe-inspiring in others. The stand-out are the five notes used to communicate with the aliens; in fact, music plays a major role throughout the film, with Spielberg revealing that “When You Wish Upon A Star” from Disney’s Pinocchio was a major influence on his screenplay.


In fact, many sci-fi alums are part of Encounters. Lance Henriksen, who would later go on to star in Alien and The Terminator, has a brief role. So does Carl Weathers (The Mandalorian, Predator). Trumbull’s work can be seen in other sci-fi classics, including 2001: A Space Odyssey and Blade Runner. And of course, Williams went on to compose music for the Star Wars saga. Another future Star Wars alum was Dan Perri, who gave both Encounters and the space saga their classic titles. Spielberg truly gathered a cornucopia of future pop culture legends when he made this film.

Now 45 years after its debut, Close Encounters of the Third Kind remains a spectacular science fiction film and a stepping stone for Spielberg’s more well-known work. As he would refine his work on Jaws in Jurassic Park, Spielberg would tackle similar themes in A.I.: Artificial Intelligence — particularly the Pinocchio parallels when it came to the android David (Haley Joel Osment). And while Encounters may have been plagued with a few production problems including heavy rewrites, its influences on the world of film still linger. Film fans have even drawn comparisons to Jordan Peele‘s latest film Nope and Encounters, though Peele’s extraterrestrial is far more malevolent. When discussing the UFOs with an army major, Lacombe refers to the phenomenon as an “event sociological.” He may as well have been referring to the similar effect Encounters, and Spielberg’s other films, have had on audiences.