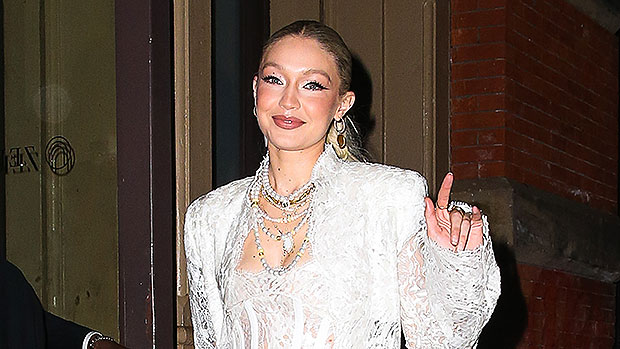 
Gigi Hadid turned 27 in style! The gorgeous model turned heads when she showed up to her bash at Zero Bond in New York City, NY and flaunted a fashionable outfit. It included a white lace bustier under a matching square-shouldered blazer and sheer lace pants that had a long train attached to the back.

She paired the look with white heels and accessorized with several necklaces and dangling earrings. She also rocked flattering makeup that included dark eyeliner and dark pink lipstick and it perfectly complimented her overall look.

The beauty was all smiles as she walked by cameras and waved while walking outside the party location. She was joined at the party by a plethora of celebrities who were also dressed to impress, including Blake Lively, Emily Ratajkowski, Antoni Porowski, Martha Hunt, and Helena Christensen.

Before Gigi made headlines for her birthday outfit, she did so for saying she’ll donate all her Paris Fashion Week 2022 earnings to Ukraine and Palestine after Russia’s invasion. She revealed the plans in an Instagram post.

“Having a set Fashion Month schedule has meant that my colleagues and I often present new fashion collections during heartbreaking and traumatic times in history,” Gigi wrote in her post, which included pics of herself at Paris Fashion Week. “We don’t have control over most of our work schedules, but we would like to walk ‘for’ something. Following in the footsteps of my friend @micarganaraz, I am pledging to donate my earnings from the Fall 2022 shows to aid those suffering from the war in Ukraine, as well as continuing to support those experiencing the same in Palestine.”

She concluded her statement with, “Our eyes and hearts must be open to all human injustice. May we all see each other as brothers and sisters, beyond politics, beyond race, beyond religion. At the the end of the day, innocent lives pay for war- not leaders. HANDS OFF UKRAINE. HANDS OFF PALESTINE. PEACE. PEACE. PEACE.”