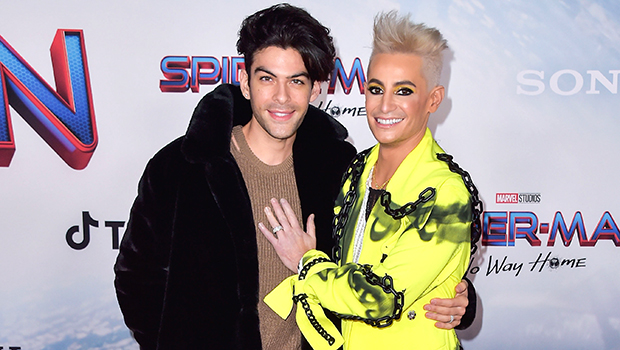 Update (5/11/22 3:24 p.m. EST): Frankie Grande and Hale Leon announced that they got married in an intimate ceremony on May 4. Frankie, 39, announced that he and Hale, 29, got married in an intimate Florida wedding ceremony with an Instagram post with photos from their wedding. “It was the most beautiful ceremony, officiated by my incredible mother, and it brought us even closer together as we took our vows before our immediate families and before God,” he wrote in the caption. He gave a rundown of the ceremony, including the joint bachelor party they went on after, and said that they had plenty more celebrations planned now that they’re officially husbands. He also gushed over Hale. ” I’m married to the man of my dreams, our families have merged together so beautifully, and we are well on our way to happily ever after. I love you Hale Grande. I am so so honored to be your husband,” he concluded his post.

Original: He said yes! Frankie Grande and Hale Leon are engaged after more than two years together. The couple posed together in a series of beautiful portraits for People, which shared the news with Frankie’s longtime fans and supporters. The Broadway star and activist, 39, proposed to the actor, 29, on Tuesday, June 8, surrounded by their beloved family and friends, the outlet confirmed. It was such a beautiful moment, and fans are so thrilled for the two. Now, learn more about Frankie’s sweet fiancé!

Ariana Grande Then & Now: See Her Transformation From Nickelodeon Star To Pop Princess

Frankie & Hale Have Been Together For More Than 3 Years

Frankie and Hale first met in 2019 at a line dancing bar in Los Angeles. For Frankie, it was basically love at first sight, he told People. “I randomly ended up going to this bar Oil Can Harry’s in the Valley and I saw Hale he was dancing on the stage,” Frankie shared just after the two started dating. “He was performing for everybody. He loves to go to Oil Can Harry’s he knew all the dances, I was blown away.”

Back in March, Hale commemorated the couple’s two-year anniversary with a touching tribute on Instagram! “Throwback cuteness. 2 years tomorrow,” he posted to the social media platform on March 27. You can see the sweet post below!

Ariana Grande’s Mom: Everything To Know About Joan Grande

Frankie & Hale Have A Puppy Together

Hale and Frankie are already parents — well, pet parents at least! The couple got a puppy in November 2020, named Appa, who is the cutest little pup. “Meet Appa,” Hale shared in an Instagram post. “Today [Frankie Grande] and I became daddy’s [SIC]. Never been more excited.”

Hale Is An Actor

While his career is just getting started, Hale has already added some impressive credits to his name. The actor has appeared in short films and a TV short each year since 2016. His first credit, per IMDb, is listed as playing Seth in the TV short The Gay Police. Along with acting, Hale has another passion that he really enjoys, which you can learn about with the next fact below!

Hale Is A Twitch Partner

Hale is a total gamer. The actor partnered with Twitch and loves to stream video of himself playing video games and interacting with his fans. Hale describes himself as “a Fog Whisperer for Dead by Daylight” and he loves “streaming horror games,” per his official Twitch channel. He can be seen on the channel on Monday, Tuesday, Thursday and Friday each week.

Hale’s Twitch bio also reveals that the actor and gamer subscribes to a Vegan diet, just like Frankie! Fans couldn’t be happier for this couple, and we cannot wait to see their engagement and marriage unfold.