HomeHollywoodHow Did Summer 2022 Become the Summer of Blink-and-Miss-Em Queers?
Hollywood

How Did Summer 2022 Become the Summer of Blink-and-Miss-Em Queers? 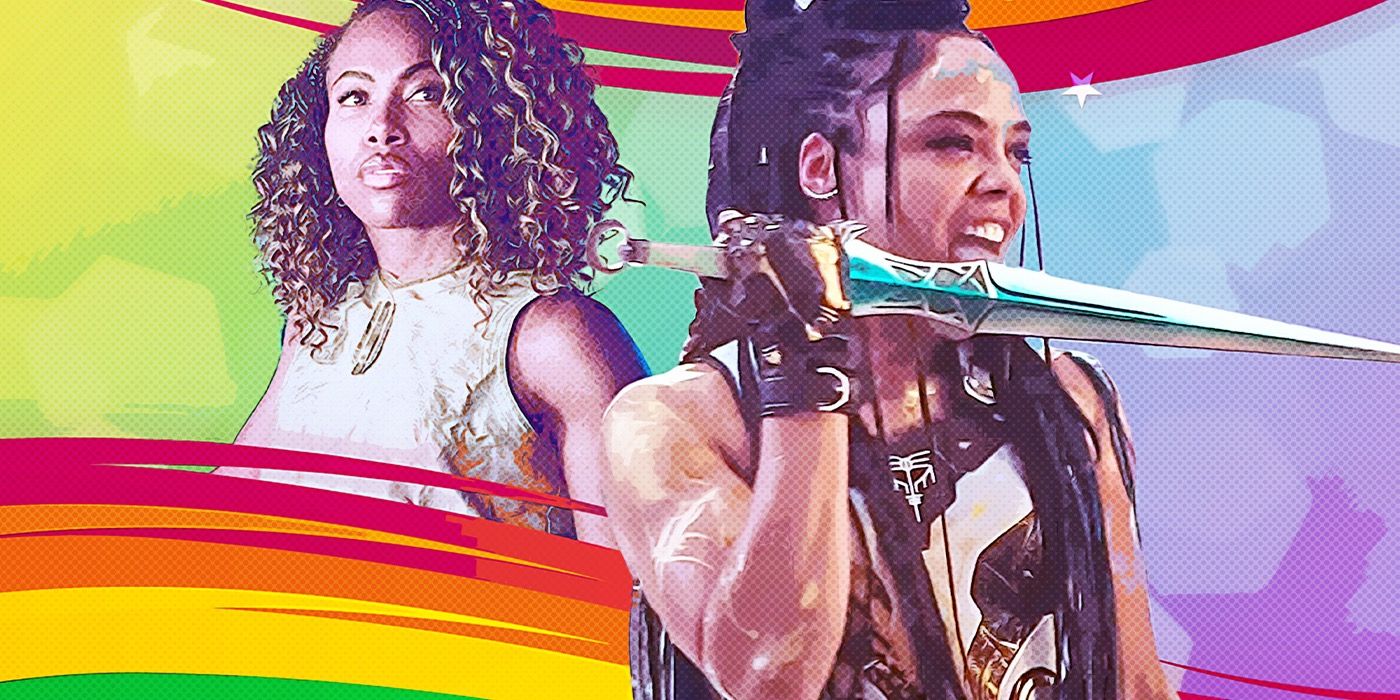 Early on in DC League of Super-Pets, super-powered canine Krypto (Dwayne Johnson) is informed by another dog that Krypto’s owner, Superman (John Krasinski), is bound to stop paying attention to him once he gets married to Lois Lane (Olivia Wilde). To illustrate his point, the dog notes that his owner, Nancy, used to exclusively pay attention to him until she got hitched to her fiancée. During this conversation, the camera cuts to Nancy and her fiancée…an unnamed woman.

This is a rare instance of an explicit on-screen queer couple in an American kids movie, a welcome development. However, the briefness of the moment, not to mention the disposable nature of the characters, does make it feel perfunctory rather than exhilarating as representation. Strangely, Super-Pets is emblematic of a larger trend that has gripped Summer 2022 movies, many of which engaged in a strange practice of acknowledging the LGBTQIA+ community but only through blink-and-you-miss-em queer characters.

Summer 2022 began, like most movie summers in the last 20 years, with a new Marvel Comics adaptation. This year’s addition to the canon was Doctor Strange in the Multiverse of Madness, which featured the openly queer comics characters America Chavez (Xochitl Gomez). Though she has a Pride pin on her jacket, Chavez’s queerness is never addressed or referenced in Madness. However, the character’s two moms are briefly seen in a flashback sequence. Unfortunately, they have no audible dialogue and are quickly sucked into a wormhole, to be rediscovered, presumably, in some far-off Marvel Cinematic Universe installment.

To be clear, nothing on-screen in Madness indicates that either the film’s director Sam Raimi or screenwriter Michael Waldron has a problem with queer people or intended to offend this population. However, it can’t help but feel disappointing that the only openly queer characters in Madness are tossed into a portal and used as emotional crutches to support Chavez over a multi-film/TV show arc. They can’t be fun supporting characters or even just have audible dialogue. So began a weird trend with Summer 2022 blockbusters nodding toward the LGBTQIA+ community, but only just that, a development that continued with Jurassic World: Dominion.

This film’s nod towards the LGBTQIA+ community came from the supporting character Kayla Watts, who’s portrayed by DeWanda Wise. This performer made the effort to insist that Watts be bisexual, a fact revealed in a brief exchange between the character and Owen Grady. Here, Watts asks Grady if “she means a lot to you.” Grady, thinking Watts is referring to his adopted daughter, nods passionately. Watts then pulls out the rug to reveal she was talking about Grady’s girlfriend, Claire Dearing (Bryce Dallas Howard), by noting that “I like redheads too.”

It’s a nice window into the interior life and desires of Watts, while it’s also welcome that Wise made the effort to ensure that this Dominion character was queer. Unfortunately, this is the only moment in Dominion that ever gives Watts a chance to talk about her queerness. Otherwise, the constantly moving nature of the plot means there isn’t much time to linger on anything that makes the humans of Dominion tick, even beyond queerness. Wise’s proactive nature behind the scenes here deserves commending, but as a feature film, Dominion still felt like another instance of a Summer 2022 movie only doing the briefest of nods toward the LGBTQIA+ community.

On and on the examples go throughout the summer. Thor: Love and Thunder has Korg (Taika Waititi) mention he has two fathers and shows him with a boyfriend at the end, while Valkyrie (Tessa Thompson) gets two brief moments leaning on her queerness, but all of this material adds up to maybe 90 seconds of screen time. Then there’s Lightyear, the movie that almost broke the internet by merely depicting an openly Lesbian supporting character. The fact that a chaste kiss between two women was enough to nearly break part of the internet is a testament to how much major American cinema has failed at queer representation. Material that’s years behind 1980s indie features like Torch Song Trilogy are still drumming up cries of controversy and “indoctrination.”


All the Lightyear hubbub suggests why Hollywood studios have been slow to have any queer representation in movies that cost more than $30 million and even in 2022 still only do small nods to the community. For years, it’s been widely suggested that Hollywood studios refrain from queer representation solely because of a desire to placate censors in foreign territories like Russia or China. However, the last few years have made it readily apparent that America still has severe problems with queer people and especially the most marginalized strains of that community, such as trans people and queer individuals of color.

Those problems have likely made Hollywood hesitant to embrace more pronounced instances of queer representation in its biggest blockbusters, especially since the budgets for these projects have only ballooned in recent years. Even streaming blockbusters in the Summer of 2022, like The Gray Man, which should be free of the box office expectations that can hinder theatrical movies, have been largely devoid of meaningful queer representation.


The brief screen time dedicated to queer characters in these Summer 2022 titles is also reflective of the limited imagination major Hollywood films have in realizing what material can be interpreted as “queer.” Two people of the same gender holding hands for two frames isn’t the only way for LGBTQIA+ representation to work its way into your movie. All elements of a feature, from the sets to the music to the sound design and everything in between, can incorporate a queer sensibility.

Just look at how Jamie Babit’s masterpiece But I’m a Cheerleader evoked the works of queer auteurs like Douglas Sirk and John Waters in its production design. Similarly, the outstanding Todd Haynes movie Velvet Goldmine evoked the makeup, lighting, and sound of 1970s rock, largely connected to queer culture, to explore a variety of queer characters and how meaningful it can be to see people that look like you in pop culture. There are so many exciting visual opportunities into leaning into aesthetics and imagery connected to the LGBTQIA+ community. It’s a pity, then that the biggest movies of Summer 2022 have only been interested in passing reflections of queerness rather than finding more imaginative ways to connect with this population.


At their worst, the fleeting presence of queerness in these movies reaffirms that mainstream modes of American cinema may never be places where queer people are seen in explicit and emotionally fulfilling depictions. Some harsh truths of life are unavoidable, and years of hoping that big Marvel or other blockbuster movies would improve their queer representation doesn’t seem to be paying off. Queer viewers will always be able to find allegorical ways that mainstream films, like the ones that have dominated Summer 2022, can resonate with them. But for those looking for movies that have pronounced and meaningful queer rep, it might be best to shift focus over to smaller Summer 2022 titles like Neptune Frost, which deliver vibrant and righteous queer energy in every frame.

Then again, the remaining months of 2022 do seem to have some major theatrical releases promising more than just cursory acknowledgments of the queer community. The Billy Eichner romantic-comedy Bros, for instance, has an entirely queer cast and is focused largely on LGBTQIA+ characters. Even the new Walt Disney Animation Studios title Strange World will apparently have a queer teen boy protagonist voiced by Jaboukie Young-White. Maybe moviegoers looking for more than a smattering of queerness in mainstream cinema will finally get what they’re looking for with these titles.


With the future offering some hope for mainstream cinema representation of queer characters, perhaps Summer 2022, in the context of history, will be looked at as a transitionary period for this strain of Hollywood filmmaking. Even if it’s a precursor to more prominent queer storytelling, the strangely similar blink-and-miss-em presence of queers in bigger-budgeted Summer 2022 movies is still a strange phenomenon. It reflects how gigantic corporations default to only dipping their toes into acknowledging the existence of queer people. When it comes to more substantive representation, or even just releasing fully filmed movies starring trans people, major American studios continue to struggle.

That’s a shame on countless fronts, including how it eschews opportunities to explore all the rich cinematic possibilities offered by the limitless perspectives in the LGBTQIA+ community. For those wanting proof of such possibilities, please watch Rafiki or BPM (Beats Per Minute), and not the Summer 2022 movies with blink-and-miss-em queer characters.