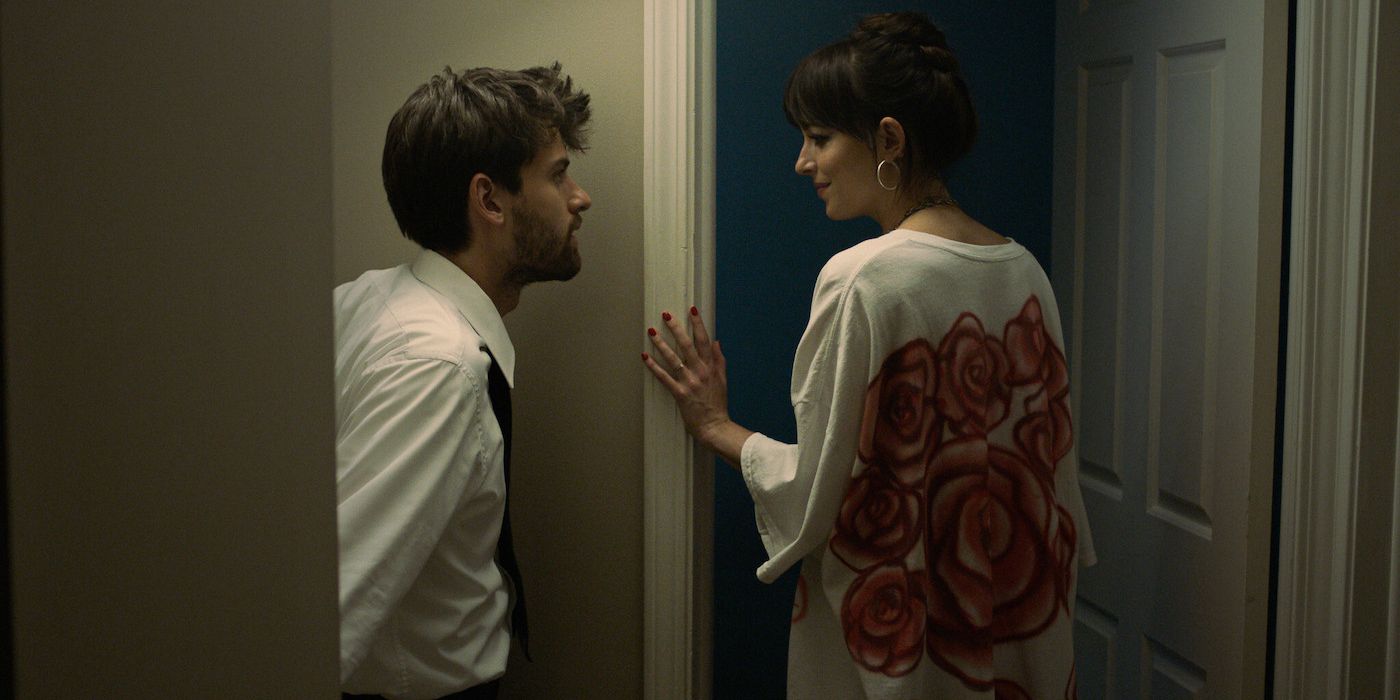 The ambitious and wildly successful Cooper Raiff has created two inspiring films in Shithouse and Cha Cha Real Smooth. Both stories have a throughline of embracing the moment, something that Raiff is certainly doing in real life with his third film Trashers starring David Harbour and Cooper Hoffman starting production in the fall. What makes Raiff’s films so endearing and beloved is that they harmonize timeless and cathartic coming-of-age journey’s with arthouse sensibilities. However, while both films are well-intended and uncomplicatedly sweet, Raiff complicates the messages of his films by not fully investigating the complexities of both his lead characters Alex and Andrew (played by Raiff), both of whom oddly benefit from the much-maligned Sad Boy archetype.


Men who perform a variant of toxic masculinity called Sad Boy culture are seemingly emotionally intelligent and often appear upset about the world, giving unsolicited advice to everyone around them—especially women. This subculture is inherently problematic because it’s often men of privilege with protagonist complexes who participate in this narcissistic mold. This wave has been mocked in popular films such as Greta Gerwig’s Lady Bird with the infamous Timothée Chalamet performance as Kyle. But Kyle represents a 2000s archetype, a mysteriously anti-social and half-read Howard Zinn groupie who only cares about his bass and coaching others about the construct of money. Since the archetype was successfully unpacked and mocked through Kyle, the sad boy has been notably less problematic in film and culture at large. The evolved sad boy archetype is something that Raiff comes back to with a younger millennial lens.


The updated version of sad boys is no longer the conventional wealthy, apathetic poet in skinny jeans with the perfect hair. Instead, the sad boy has evolved to represent lost, well-intended white men, who like Alex and Andrew, are all burdened by very relatable class guilt and love for others so great that it borders on being a self-absorbed distraction from their problems. Essentially, Raiff writes men who are emotionally aware enough to help others but are unable to help themselves. Raiff walks a dangerous tightrope trying to both humanize and critique his flawed male protagonists. He writes both his leads authentically and consciously as neurotic, stunted young men with “make-happy complexes,” but also as self-effacing people with benevolent charm and genuine intentions. Raiff successfully humanizes his thoughtful characters but struggles when unpacking their ego by the end of both films. In Raiff’s challenging interpretations, both Alex and Andrew are wildly observant, considerate, and introspective people, but they give everyone around them advice—everyone except themselves.

Raiff leaves audiences to investigate both Alex and Andrew’s seemingly innocent flaws. However, their weaknesses are overpowered by their goodwill. Unfortunately, the balancing act of fully contextualizing these leads can sometimes teeter more as apologist arguments for toxic traits, especially when it comes to how women are entranced by both men and how they are constantly absolved by their privileged identities. The films’ deeper messages fall short because of these half-developed critiques of their flawed protagonists, starting with his directorial debut, Shithouse.

Alex (Raiff), a homesick, struggling college freshman, is convinced that everyone must be as emotionally and mentally unstable as he is – they’re just better at hiding it. Audiences watch Alex in his most introverted state, speaking to stuffed animals and examining peers in their environment as if they are in a lab. He’s self-conscious, socially awkward, and lonely, but, he also seems financially stable, has a family who loves him, and is incredibly strong-willed in his opinions of others. Naturally, Alex is struggling to adjust to an isolated life without the protection of love and family and is also too self-interested to realize his privilege among others.


Raiff smartly chooses to confront Alex with two characters: Sam (Logan Miller) and Maggie (Dylan Gelula). Sam, his roommate, represents a young man who has fallen victim to much more powerful toxic masculine archetypes like fraternity culture that can condone abusing drugs and alcohol. And then there’s Maggie, Alex’s resident advisor, someone who isn’t yet prepared to confront unresolved issues, but Alex is narcissistically determined to help fix her. Therein lies the problem of Alex: he acts as an emotional and social barometer, he believes he knows when Maggie is lying, upset, or sad, and ultimately he believes she doesn’t know herself. Alex ignorantly believes that others’ unwillingness to understand the world from his perspective is because of their physical and emotional barriers. He believes others’ walls are obstacles put up to prevent their own reflection, especially Maggie. Alex felt he was being rational by criticizing the ways others live their lives when in actuality he was projecting and being emotionally abrasive.


Raiff successfully writes part of Alex’s journey to revolve around empathizing with people different from him in order to finally understand others’ boundaries. Unfortunately though, Shithouse blurs the line between overstepping boundaries and innocent behavior in its conclusion. Raiff rightly unpacks an obtuse Alex, but the film complicates itself by not fully unpacking the sad boy, privileged mold that Alex benefits from in the eyes of the audience. After a convenient time jump, Alex and Maggie are found to be friends and partners a few years into college, which doesn’t allow the audience to fully realize the flawed protagonist arc that Alex could’ve had. The film concludes without clearly challenging Alex on his privilege and unhealthy interactions; instead, Alex fits the sad boy archetype as being impossibly wise and emotionally intelligent beyond his years. Alex ends the film both flawed and loved, but mostly loved, which is eerily reminiscent of the many men who are nostalgic about their college experience.

Again, with Cha Cha Real Smooth, Raiff tries to investigate a more complicated sad boy archetype with Andrew. This 22-year-old lives at home with his adorable and impressionable brother (Evan Assante), his caring mother (Leslie Mann), and a stepfather (Brad Garrett) he isn’t that fond of. Now graduated from college, Andrew is in career purgatory, working in a mall food court at Meat Sticks and as a party starter for bar mitzvahs. But then Andrew meets Domino (Dakota Johnson) and her daughter Lola (Vanessa Burghardt). Raiff carefully builds an earned, impactful relationship between Andrew and Lola, but what happens with Domino is a bit more complicated.

Andrew is struggling to embrace all the good and bad moments in life, internalizing everything; as a result, he externalizes a bit too much. He tries to protect everyone from pain with problematic methods, from trying to defend kids by fighting kids to having little filter in personal situations that don’t necessarily involve him. Andrew finds a shared connection with Domino through this struggle, as she’s going through a crisis of her own, but it’s in that struggle that this film complicates itself. Andrew isn’t suffering from class or privilege conflict, he’s struggling to understand his place in the world, which for the sad boy archetype equates to: Why am I not successful like everyone else my age? And while finding purpose in the world is something many generations of young adults have dealt with, Raiff doesn’t fully investigate the privilege Andrew has, much like Alex in Shithouse. This leaves audiences again to investigate the good nature of Andrew versus his more toxic traits.

Specifically, Raiff intends for audiences to unpack Andrew’s savior complex in Cha Cha Real Smooth, “it’s euphoria for him. It’s what he lives for. It’s these subtle things and I wanted to tell the audience that this is not okay.” And while there is a very well-written arc about Andrew reflecting on his narcissism, his personal growth is through the vehicle of Domino, a woman going through much more immediately serious issues than Andrew. Domino’s severe and pressing trauma, from a miscarriage to a frantic family life, makes her a complex character that is sidelined at the end of this film for Andrew to learn his lesson. Domino explains to Andrew that much of her 20s were spent taking care of Lola, her autistic daughter. Their conversation, however emotionally resonate, was an unpersuasive arc to get audiences to reflect on Andrew’s privilege.


Both of Raiff’s lead characters benefit from the privilege of their sad boy archetype, never having to be fully flawed and learn from their behavior – they just have to be sweet and try to self-reflect. Both Shithouse and Cha Cha Real Smooth prompt audiences to believe Alex and Andrew have learned something about privilege in their conclusions, but it seems all that the characters learned is that they are good people with some minor protagonist complexes. While Raiff illustrates a progression of the sad boy archetype with thoughtful characters, the mold is inherently still one of privilege that desperately needs to be examined. Assuming Raiff will continue to unpack characters like Alex and Andrew in the future with Trashers, hopefully, there will be a stronger commitment to a more comprehensive examination of the very-comfortable, sad boy mold. Filmmakers cannot continue to represent white, suburban communities as being innocently naive without ever saying anything profoundly introspective to challenge those same audiences.

As a 27-year-old, white, heterosexual, cis-gendered man living in the suburbs for most of my adult life, Alex, Andrew, and Raiff speak to my identity. People might feel seen in Raiff’s films, but that isn’t the same as being uniquely challenged by these stories and characters. Raiff is an enormous talent and films today need his authentic touch and honest storytelling on screen. However, these conventional sad boy character studies aren’t cutting it – they feel as if they are manufactured for the audience they’re intended to provoke. Both Shithouse and Cha Cha Real Smooth benefit from the power of the unexamined sad boy archetype that those of privilege often forgive. I can only hope a filmmaker with Raiff’s talents can uncomplicate his protagonists by giving audiences a more nuanced lens into the flaws of the sad boy.