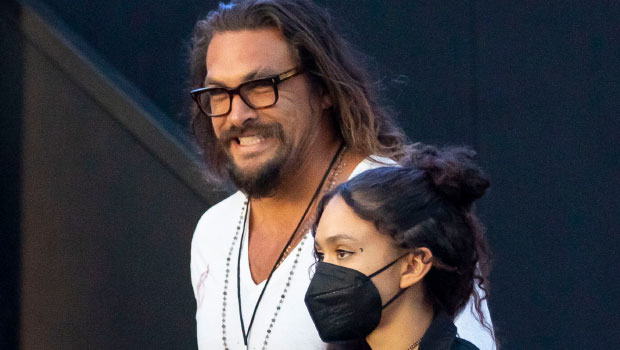 
Jason Momoa, 42, and his daughter Lola, 14, had a fun weekend in London! The actor and his mini me attended the Rolling Stones concert at Hyde Park and were photographed taking selfies and sharing laughs. They were also joined by Guns N’ Roses guitarist Duff McKagan at the American Express presents BST Hyde Park festival and were seen engaging in conversation while rocking out from the audience area.

Jason wore a white v-neck graphic short-sleeved shirt and black and white striped pants during the event, and had his long hair down. Lola wore a black denim jacket over a white crop top and a black and white checkered skirt as some of her hair was pulled up into a bun and the rest was down. Duff wore a black jacket and sunglasses and had his blond hair cut into a short shaggy style.

Jason’s outing with Lola, whom he shares with ex Lisa Bonet, comes just a week after he made headlines for bringing Lola and his son Nakoa-Wolf, 13, to a UN conference for ocean conservation. The doting dad posed with his kids at the event and was dressed to impress in a pink blazer over a white button-down top. Lola and Nakoa-Wolf also looked great in their own outfits, which included a green blazer for the former and a short-sleeved pink button-down under a black vest for the latter.

Being named the UN Environment Program’s Advocate for Life Below Water, Jason gave a speech at the event and his kids sat down in chairs happily listening to him. The talented star posted pics from the event to Instagram and used the caption to point out the important issues he was at the event for.

“With great respect, admiration, and humility, I join the UN family and commit to the critically important work: to manage, protect and preserve the Ocean and all living creatures on our beautiful, BLUE plane,” he wrote. “We must seek to right the wrongs we have done against our children and grandchildren, turn the tide on our irresponsible stewardship, and build momentum for a future where humanity can once again live in harmony with nature. papa loves you babies mahalo for standing by my side aloha j.”