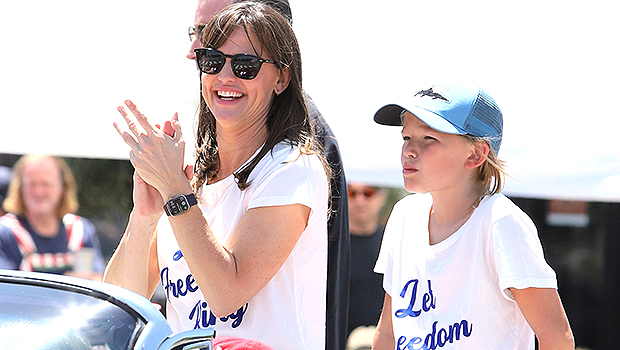 
Jennifer Garner took her son Samuel Affleck, 10, to the Pacific Palisades Fourth of July Parade in Los Angeles, California on Monday (July 4). The mother-son duo sat on the top of a red car and waved to the crowd as they drove through the annual parade. The pair had giant smiles on their faces and even Samuel seemed to be absolutely loving the festive event while side-by-side with his famous mom.

The Alias actress and her youngest child who she shares with Ben Affleck wore matching “Let Freedom Ring” white and blue T-shirts and denim jeans. Jennifer rocked a pair of black sunglasses, while Samuel sported a blue hat. Jennifer was the Grand Marshal for the parade which was labeled on a sign that was placed on the front door of the car. Jennifer and Samuel sat in the back and had the perfect view of the crowd.

Jennifer shares Samuel and daughters Seraphina, 13, and Violet, 16, with her ex-husband. Ben, 49, recently let Samuel drive a luxury Lamborghini at a dealership in Los Angeles, but the 10-year-old backed up the car and hit a parked BMW. A source close to Jennifer told Our Source EXCLUSIVELY that she’s “not happy” about the June 26 incident which Ben’s fiancee Jennifer Lopez, 52, was also present for.

“She knows how dangerous that was and she knows things could have gone very badly so she’s beyond thankful nobody got hurt,” the insider shared. “Even though J. Lo is a mom and likely knows how risky that was, Jen doesn’t blame her at all because Ben should’ve known better,” our source added. “Jen knows Ben was also very upset over the whole thing. He apologized profusely and told her how sorry he was. She’s moved on but hopes Ben and Samuel learned a lesson from this whole thing.”