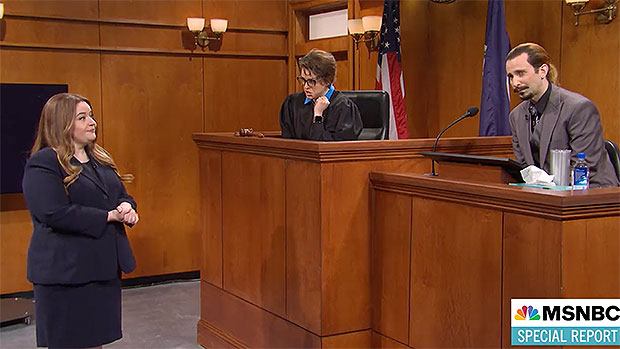 
Johnny Depp, 58, and Amber Heard, 36, have been dominating headlines with their on-going court case — and Saturday Night Live went full throttle with it on the May 14th cold open. Kyle Mooney played an on-the-stand Johnny in the hilarious bit, who detailed the “fecal delivery” delivered by ex Amber in his bed to Judge Cecily Strong.

It all started when Kyle as Johnny’s property manager, played hilariously by longtime cast member Kenan Thompson, uncovered the “dookie” in Johnny’s room. Amber’s lawyer, played by Heidi Gardner, then attempted to blame the couple’s dogs — saying there was no way that the feces could be proven to be human!

Strong’s Judge didn’t seem bothered at all by the jarring detail, sharing a smile with Kyle’s Johnny and a drink (yes, while in court). “That’s true, but I’ll allow it, because it does sound fun. And this trial is for fun!” she laughed to a smirking Kyle.

Amber Heard & Johnny Depp: Photos Of The Embattled Exes Amid Their Trial

“I think I’ve seen enough. This trial has given me a lot to consider,” she then announced to the court. “On one hand, I believe Mr. Depp story. But on the other hand, your constant little smirk lets me know that. This is not the first woman you made so mad that she pooped in your bed,” she said. Kyle’s response? “I guess I have been known to be full nightmare,” he quipped in full Johnny mode, right down to the pony tail.

In real life, of course, Amber defecating in the bed she used to share with the Pirates of the Caribbean star has been an on-going source of controversy. The incident has repeatedly come up in the case, including in a testimony with Johnny’s former driver and security guard Starling Jenkins III who appeared via a video call into the Virginia courtroom. In the call, Starling said he “had a conversation pertaining to the surprise she left in the boss’s bed.”