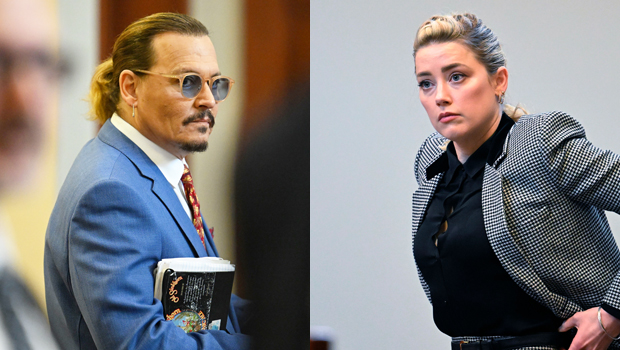 
Johnny Depp denied abusing Amber Heard when he returned to the witness stand for the defamation trial against his ex-wife on Wednesday, May 25. When the 58-year-old actor’s lawyers asked him what it was like to life to Amber’s testimony in the trial, he spoke about how “horrible” he felt. “It’s insane. To hear heinous accusations of violence, sexual violence that she’s attributed to me, that she’s accused me of,” he said. “I don’t think anyone enjoys having to split themselves open and tell the truth.”

Johnny listed all the things he felt while Amber, 36, testified during the trial. He described it as “horrible, ridiculous, humiliating, ludicrous, painful, savage, unimaginably brutal, cruel,” before he said that her accusations against him were “all false.”  Johnny denied the allegations that his ex brought forth in the court. “No human being is perfect. Certainly not. None of us. But, I have never in my life committed sexual battery, physical abuse, all these outlandish outrageous stories of me committing these things,” he said.

Before the court broke for lunch, he swore that he’s been truthful throughout the trial. “No matter what happens: I did get here, and I did tell the truth, and I have spoken up for what I’ve been carrying on my back reluctantly for six years,” he said.

The trial started its final week with Amber’s defense team continuing to make their case against her ex-husband. Amber wrapped up her cross-examination and redirect on Tuesday, May 27. After calling the Aquaman actress to testify, they called a wide array of witnesses, including Amber’s sister Whitney Henriquez, her makeup artist Melanie Inglessis, and Johnny’s ex Ellen Barkin.

During Amber’s testimony, she went over many different alleged incidents where Johnny abused her, including emotional descriptions of times that she says that the Pirates of the Caribbean star hit her and sexually abused her. She also went over her recollection of different events that have been much discussed during the trial, including Johnny’s severed finger. She also denied defecating on Johnny’s bed. Amber also spoke about her relationships with James Franco and Elon Musk. She explained that James offered her “friendship” amid her relationship with Johnny, and she recalled meeting Elon for the first time, saying he was a “gentleman,” before they began their relationship.

Kate Moss & Johnny Depp’s Dating History: Everything To Know About Their Relationship

Johnny sued Amber for $50 million, over an op-ed that she wrote for The Washington Post in 2018. Johnny has said that the piece hurt his reputation and cost him lucrative movie deals. Amber has countersued him for defamation also. Johnny denied abusing Amber throughout his testimony.

Early on in the trial, a source close to Johnny revealed to Our Source exclusively that the actor was feeling hopeful going into the trial. “Despite everything that went down with the case in London, Johnny is feeling more and more confident as the days in court for this trial have progressed. This time around feels very different since they’re back in the States and Johnny has supporters who weren’t able to be there for him previously,” they said.