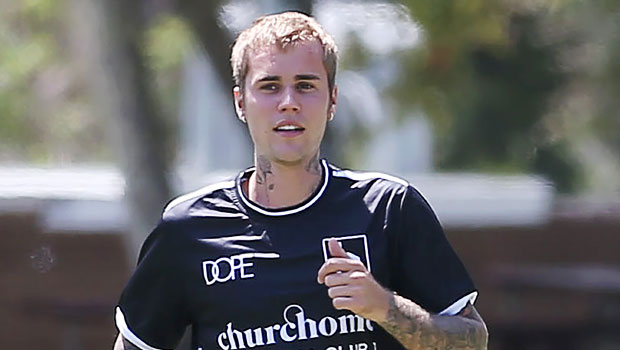 
Justin Bieber is on the mend! The singer was seen with a big smile on his face, seemingly doing much better after his diagnosis with Ramsay Hunt Syndrome, which paralyzed half of his face. Justin, 28, enjoyed a day at the beach in the photos, which you can see here (via DailyMail) on Tuesday, July 5. The Justice popstar looked like he’s made good headway in recovering, and he had a big smile on his face.

Justin was seen having fun in the sun with his wife Hailey Bieber, 25, and some of their friends (including Usher) on a vacation in Idaho. The Purpose vocalist looked like he was in a great mood, with a wide smile on, as he took in the many attractions that the beach had to offer, including an inflatable slide. Justin sported a neon yellow bathing suit, plus a white baseball cap and matching sunglasses. He was also seen lounging and cozying up to Hailey, who rocked a blue bikini top and matching lounge pants.

It’s great to see Justin doing so well. The singer had announced that he’d come down with Ramsay Hunt Syndrome in an Instagram video on June 10. “My body’s telling me I’ve gotta slow down, and I hope you guys understand, and I’ll be using this time to just rest and relax and get back to 100 percent so that I can do what I was born to do,” he said at the time. The diagnosis also led to him canceling a string of dates on his Justice world tour, and thankfully, he seems like he’s doing a lot better!

Justin Bieber & Hailey Baldwin’s Most Romantic Moments: Photos Of The Lovebirds And Their Cutest PDA

Since suffering from facial paralysis, Justin has had his wife Hailey by his side! The model reposted his announcement video with an “I love u baby” message on her Instagram Story. A source close to her revealed to Our Source exclusively that she was doing all she could for her husband. “Hailey is completely determined to support Justin in any way she can. She sees how much he’s going through and she wishes there was more she could do to help,” they said.

Justin Bieber’s Dad: Everything To Know About Jeremy Bieber & Their Relationship