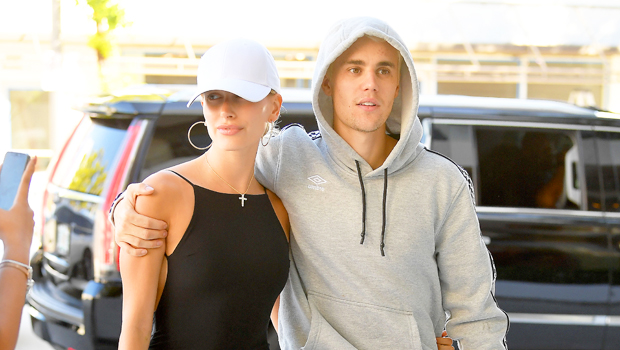 
Justin and Hailey Bieber grabbed lunch with the popstar’s young brother and sisters during a stop in the singer’s home country of Canada. Justin, 28, and Hailey, 25, smiled alongside his half-sister and brother Jazmyn, 13, and Jaxon, 12, as well as his step-sister Allie, 15, on Wednesday, May 11. The siblings looked excited to bond with their big brother during an off-day in Shakespeare, Ontario.

The siblings all leaned in for a selfie together as they had some drinks. They also posted another photo of Justin, Hailey, and his two sisters all squeezing together for a selfie. Jazmyn captioned the photo simply with “Fam time.” Hailey also shared the selfie of Justin and the girls to her Instagram Story, with the caption “My loves” and a heart emoji. Justin’s step-mom Chelsey commented on the photo with three heart emojis.

Even though with the age gap and distance, it doesn’t seem like Justin gets to spend a ton of time with his siblings, but he still seems super close with all of his family members, and they’ve had a few occasions where they’ve managed to get together in recent months. Around the holidays, Justin posted a few photos of himself with his wife and sisters and called them his “Favorite Girls.” He also shared a super cute photo of the entire family when they all got together for his sister Bay’s third birthday back in August.

Over the last few months, Justin has been on his Justice World Tour, and it seems like in recent weeks, Hailey has come along on the road to join him. He’s posted a few backstage shots of him and his wife walking through venues together to his Instagram. Justin also revealed in a recent interview with SiriusXM’s PandoraNow that he draws his biggest inspiration from his wife. “I think being inspired by my relationship has, you know, definitely produced some, some great music and, you know, sometimes you get out that writer’s block or whatever, but you know, I said it before, but love is kind of like the foundation of life and love being the foundation of like, kind of like my music in general,” he said.

Justin Bieber’s Dad: Everything To Know About Jeremy Bieber & Their Relationship