HomeHollywoodKim Kardashian Arrives In Italy For Family Dinner Party Ahead Of Kourtney’s...
Hollywood 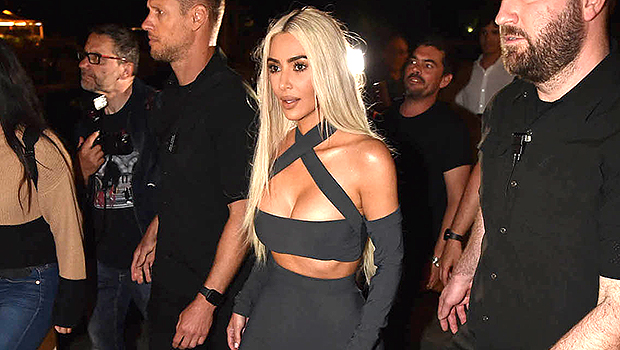 
Kim Kardashian doesn’t do anything halfway, so when the reality queen arrived in Italy on May 20 for sister Kourtney Kardashian‘s wedding, it was in a chaotic storm of flashbulbs. The reality maven and SKIMS founder, 41, touched down in the romantic city of Portofino and made her way to a family dinner wearing a slinky gray stretch two-piece ensemble and boots. Her hair, still platinum blonde from an impromptu dye job for the Met Gala, was parted down the middle in a classic style.

Cameras caught her every move as she walked towards the event, where Kourtney, wearing  a sheer and red velvet ensemble, was already seated with new husband Travis Barker. Kris and Kylie Jenner were also seen at the restaurant, and in a video, North West ran to mama Kim to greet her as she walked to the table, per TMZ. Kim arrived solo, as boyfriend Pete Davidson is reportedly preparing to leave his longtime gig on Saturday Night Live.

The joyous family gathering comes just days after Kourtney and Travis tied the knot for real in an intimate Santa Barbara courthouse wedding on May 15. Only a few people, including Kourt’s grandma Mary Jo “MJ” Campbell were in attendance there, so the Italian event is a chance for the entire family to celebrate. Notably absent at the festivities in Italy were Kourtney’s ex Scott Disick, who is reportedly struggling with Kourtney’s repeated weddings to Travis, and Kim’s ex-husband Kanye West, who is currently dating a newly tattooed Chaney Jones.

The highly public nature of the family event doesn’t exactly come as a surprise. Sources EXCLUSIVELY revealed to Our Source earlier this month that Kourtney and Travis were allowing cameras, including those for HULU series The Kardashians, to film the celebration.

“Kourtney and Travis’s upcoming wedding will be filmed and parts of it will be used and appear on The Kardashians reality show,” the insider said.  “They know that they are both reality stars now, as Travis has appeared on nearly every episode. Their storyline is a central focus and after some consideration, they both feel that they can’t have a wedding and not allow it to air.”