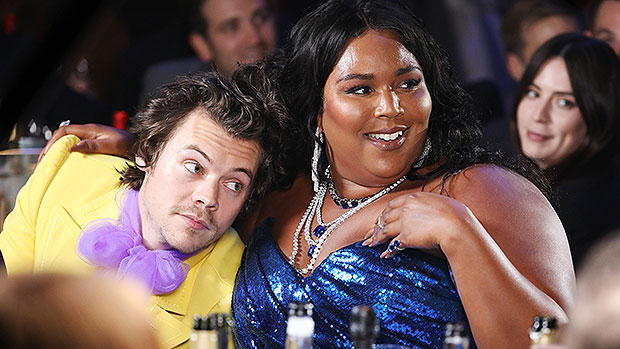 
For the second weekend of Coachella, headliner Harry Styles surprised his fans by bringing Lizzo up on stage to perform with him. On Friday (April 22), the “As It Was” singer began to belt out “I Will Survive” when Lizzo suddenly appeared to back him up on Gloria Gaynor’s beloved classic. The pair regaled the audience with their dulcet tones as they danced around in matching pink feather outfits. Moments later, they had the crowd in a frenzy with their rendition of 2011’s “What Makes You Beautiful” from Harry’s boy band days in One Direction. Watch the insane duet, below!

Harry is getting used to sharing the spotlight with other A-listers, as he brought country music legend Shania Twain up on stage during his headlining Coachella set last weekend. The British pop star, 28, took over the Indio, California music festival by performing three songs off his new album Harry’s House, including the hit single “As It Was,” before Shania, 56, joined him for two of her iconic songs; “Man, I Feel Like a Woman” and “You’re Still the One.”

While chatting in between their songs, Harry gave Shania an enormous compliment by saying he was “forever grateful” to her for teaching him how to sing while he was growing up. “Now I have to tell you, in the car with my mother as a child, this lady taught me to sing,” Harry told the crowd, before joking, “She also taught me that men are trash. But to you, for the memories you gave me with my mother, I’m forever grateful.” Shania replied, “I’m at a loss for words, I’m a bit starstruck. When I was writing this song, you were just a kid, so it’s kind of a dream and very surreal to be sitting right here with you.”

Meanwhile, in his first time performing at the famed Coachella festival, Harry opened his set by telling the adoring audience, “We have a full moon, you have a ticket and I have the flavor.” He would go on to sing an 18-song set, including hits like “Adore You,” “Watermelon Sugar,” “Cherry” and “Golden.”