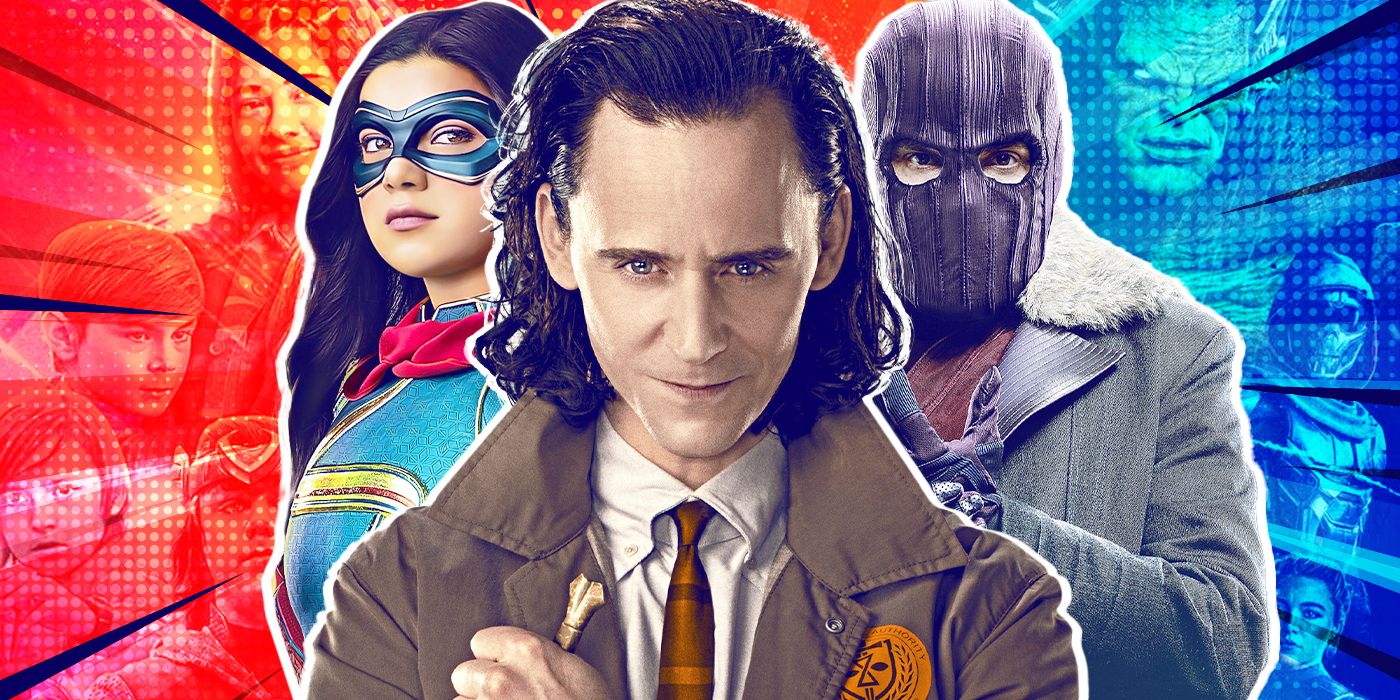 The MCU has always had their endgames. Phase One was setting up The Avengers and the combined runtime of the phase was just over 12 hours. Phase Two started laying the groundwork for Thanos (Josh Brolin) and the Infinity Stones in Thor: The Dark World (which also retconned two infinity stones being in Phase One) with a total runtime of about 12 hours as well. Then in Phase Three, every lingering storyline across all the heroes funneled down into the Infinity War and Endgame, with a total runtime of just under 25 hours.

Then, after the Infinity Saga concluded, Phase Four began in January 2021, and the end goal of the phase has seemed pretty vague. This is because it’s doing the groundwork of setting up multiple plotlines, across more projects, released in a shorter amount of time. Phase Four is the beginning of The Multiverse Saga, which includes plots across infinite Earths and an avalanche of new lead characters. Already Phase Four is about 50 hours long, with I Am Groot, She-Hulk, and Black Panther: Wakanda Forever still on the horizon. With so much sweaty comic book goodness, it’s understandable to have a hard time keeping up with everything happening in the MCU. So for some clarity: here are the summaries of each major plotline set up in Phase 4, which projects they appear in, and which shows and movies are going to pick up the plotline next. Excelsior, True Believers! Spoilers below for everything currently released in the MCU.

Thunderbolts, and Mafias, and Conspiracy, Oh My!

The smallest scale plot happening at the moment are the Earthly-based ones. Now that half of the world’s population has been blipped back into existence, practically everything has had to have a massive amount of change overnight. Local gangs like the Tracksuit Mafia have been growing in numbers after filling in a power vacuum that occurred when people were snapped away. National and international governments have been reckoning with a world shattering population increase, and now they have had to change resource management, housing, and more over a very short period of time. A new player named The Power Broker (Emily VanCamp) rose to… well, power, during the five years between Infinity War and Endgame, providing funding and weaponry to villains across the globe.


Internationally, secret organizations like The Ten Rings, the same Ten Rings that kidnapped Tony Stark (Robert Downey, Jr.) back in the first Iron Man, have also been growing in numbers and expanding under the new leadership of Xu Xialing (Meng’er Zhang), which can only spell more trouble.

In the United States, the country hasn’t really been accepting Sam Wilson’s (Anthony Mackie) role as Captain America. Sam himself has had his own reservations of taking on the mantle because of the United States’ long history of racism. The government used this opportunity to blindside everyone and hire their own Captain America in the soldier John Walker (Wyatt Russell). Walker proved to be unstable due to his own PTSD and Nationalist ideology. So, he didn’t quite work out, but the government continued to recruit him anyway as the U.S. Agent. The person who reached out to him was Contessa Valentina Allegra de Fontaine (Julia Louis-Dreyfus) who is setting up her own government-sanctioned Avengers. These people will, in theory, follow orders better than the Avengers, who just ignored the Sokovia Accords in Infinity War.


The weak political landscape has also led to more corruption within the Department of Damage Control, who use their power to spy on anyone perceived as a threat, and with extreme prejudice. Lately, they have been hellbent on containing “enhanced” individuals… better known as Mutants.

On an international level, several changes in leadership across nations have led to several conflicts between countries, especially following the death of King T’challa (Chadwick Boseman) in Wakanda.

Featured in: Black Widow, Shang-Chi and the Legend of the Ten Rings, Falcon and the Winter Soldier, Ms. Marvel, Spider-Man: No Way Home, Hawkeye.

Remember back in the ’90s when it was super popular to have spin-offs featuring baby versions of the main series characters? Well, this is sort of like that only if instead of baby versions of our favorite heroes, they are successors of the MCU heroes, or just younger people in general that are heroes. For an easier comparison, in a lot of ways the Young Avengers are Marvel’s answer to Teen Titans. Nearly every project post-Endgame has introduced the audience to a character that has been on the team at some point or another in the comic world. So far we have been introduced to Billy and Tommy Maximoff (Julian Hilliard and Jett Klyne), America Chavez (Xochitl Gomez), Ms. Marvel (Iman Vellani), Kid Loki (Jack Veal), Cassie Lang (Kathryn Newton), Elijah Bradley (Elijah Richardson), Kate Bishop (Hailee Steinfeld), and several other contenders set to make their appearance soon. With all the Avengers either dead or on their separate ways, this would be the perfect team to form and take on any big threats before Avengers: The Kang Dynasty.


Featured in: Wandavision, Falcon and the Winter Soldier, Doctor Strange in the Multiverse of Madness, Loki, Hawkeye, Ms. Marvel.

Continuing in: Ant-Man and the Wasp: Quantumania and (maybe) Wakanda Forever and Ironheart if Riri Williams (Dominique Thorne) is on the team.

Cosmic Chaos and Guarding the Galaxy

With so many gods in the MCU, how could someone like Thanos just slip through the cracks as he destroyed half of the universe? Well, the answer seems to be that the gods are too human, like Thor (Chris Hemsworth) to take conflicts like this on alone. A level above that you have selfish and corrupt gods like Zeus (Russell Crowe) who only care about themselves. Above that you have gods like Uatu, The Watcher (Jeffrey Wright), who are forbidden to interfere across the multiverse due to some vague checks and balances system. Above him there are Celestials who only care about creating humanoid synthetic beings with fake memories (the Eternals) to maintain planets until they are ready to be used as an egg to give birth to new Celestials. And above those guys are Cosmic Entities like Death, Eternity, Entropy, and Infinity, who have not been shown onscreen enough to really understand the extent of their powers. With gods as unreliable as these, it’s no wonder how someone like He Who Remains (Jonathan Majors) was able to bypass all their power and control everything under an authoritarian leadership to preserve his own Sacred Timeline.


Gods like these are doomed to be fail, or at least be fought. Already their sense of power has been threatened by Thanos and Kang (also Jonathan Majors) on a cosmic level.

Even on a galactic level these gods are being challenged more each day, and giving rise to more interplanetary conflicts. Whether it be people like Gorr (Christian Bale) going on a killing spree, or High Priestess Ayesha (Elizabeth Debicki) creating Adam Warlock (Will Poulter) to challenge heroes who are trying to keep the peace, everything is in utter chaos. Previously it was only Captain Marvel (Brie Larson) and the Guardians of the Galaxy focusing on heroics out in space. But they’re gonna need a lot more help a lot more quickly with all of these villains coming up. Especially as more cosmic weapons and signals seem to be spreading across the galaxy.

Featured in: What If, Loki, Moon Knight, Ms. Marvel, Shang-Chi and the Legend of the Ten Rings, Thor: Love and Thunder, Eternals.

Continuing in: What If and Loki Season 2, Guardians of the Galaxy Vol. 3 and The Holiday Special, The Marvels, Secret Invasion.

RELATED: Phase 4 of the MCU Needs an End Goal Fast

All of these plots are combining into one thing: destabilizing the fabric of our universe. Whether it be villains like Kang and Agatha Harkness (Kathryn Hahn) or heroes like Wanda (Elizabeth Olsen) and Doctor Strange (Benedict Cumberbatch), a bunch of characters are directly damaging the multiverse for their own personal gain.

In Loki, the Clock A.I., Ms. Minutes (Tara Strong) informs Loki (Tom Hiddleston) that there already has been a Multiversal War, started and ended by Kang and his variants. It destroyed most timelines until all there was, is He Who Remains. But He Who Remains got old and tired, he couldn’t maintain a timeline for all eternity. So he led Loki and Sylvie (Sophia Di Martino) down a path that would destroy him. This let the multiverse branch out into infinite possibilities where He Who Remains would no longer have the responsibility of controlling everything. But this will also lead into absolute chaos. If heroes and villains are already breaking of the multiverse for their own personal gain, time will tell until it leads into a war bigger than everything we’ve seen in the MCU so far. In fact, it’s already been breaking into franchises outside the MCU. Literally anyone and everyone could show up to fight. If the stakes needed to get bigger than Endgame, this is almost the only way it could be done.

Appears in: Wandavision, Loki, What If, Spider-Man: No Way Home, Doctor Strange in the Multiverse of Madness.

With the multiverse being broken, the MCU is becoming the most widespread film franchise in the history of cinema.