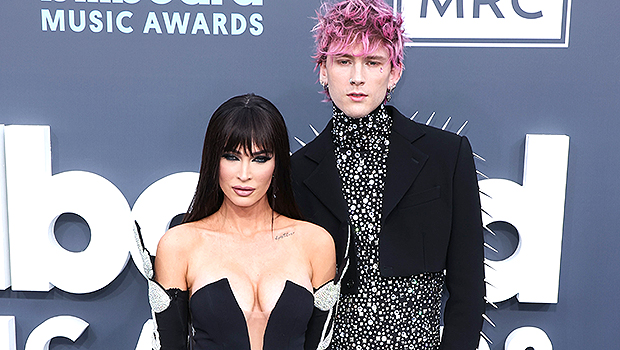 
Megan Fox shared the sweetest message to her beau Machine Gun Kelly following his performance at the 2022 Billboard Music Awards. “Baby- so proud of you for giving such a vulnerable and emotional performance. You are magic,” the Transformers actress, 36, wrote on Instagram Tuesday, May 17. Her post included snapshots of the couple at the awards show and at Megan’s 36th birthday party in Las Vegas that can be seen HERE. She also jokingly called Sin City “my version of the innermost ring of hell,” adding, “off to the wilderness for my birthday. No one talk me for a week.”

MGK, 32, performed “Twin Flame” at the BBMAs on May 15 and shocked fans with his comments. First, the rapper referred to Megan as his “wife,” when revealing that he wrote the song for her. He also made a shout-out to his and Megan’s “unborn child.” The power couple have been engaged since January, but have not officially announced a wedding or a pregnancy, so his remarks really confused fans.

The Midnight in the Switchgrass co-stars walked the BBMAs red carpet together at MGM Grand Garden Arena in stylish black outfits. Megan wore a black dress with a super low-plunging neckline, while MGK rocked a black cropped suit jacket with a silver-studded black shirt underneath. Hours later, they celebrated Megan’s birthday at Tao with Diddy. Megan wore a sequined mini dress and a tiara to her B-Day bash, while MGK wore a black turtleneck with a bedazzled collar.

Billboard Awards 2022: See All The Photos From The BBMAs

It still remains unclear if the couple are married and/or expecting. However, an inside source EXCLUSIVELY told Our Source in March that Megan and MGK definitely want to have a child together. “A baby is 100 percent in the plan for Megan and Colson, it’s something they’ve been openly talking about since they first got together,” the source revealed. They added that the lovebirds “believe they’re destined to have a child together, but they’re letting it happen naturally, they’re not super focused on it.”

Megan and MGK both have children from previous relationships. Megan was married to Brian Austin Green, 48, between 2010 and 2021 and they had three sons together: Noah, 9, Bodhi, 8, and Journey, 5. Meanwhile, Machine Gun Kelly has a 12-year-old daughter, Casie, who he fathered with an ex-girlfriend.