HomeHollywoodMegan Thee Stallion Twerks Up A Storm In Short Shorts During NYC...
Hollywood 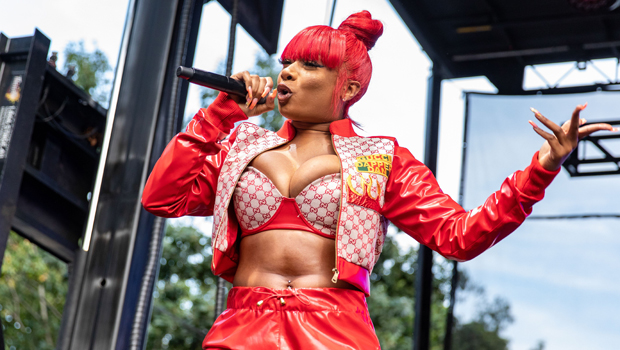 
Megan The Stallion proved once again that she can twerk better than anyone. The “Savage” hitmaker, 27, showed off her twerking skills at her “NYC Hottie Party” that she documented in a one-minute TikTok video on May 9. Megan got all glammed up in a hotel room at the start of the video, as her friends ate pizza and danced to her music. Once the Grammy Award winner was ready in her plunging blue crop top and matching short shorts, Megan left to perform for her die-hard fans at a venue in the Big Apple.

NYC HOTTIE PARTY WAS A MOVIE 😂🎥🍿

Megan’s twerking session took place on a platform above a crowd of fans at the club. She turned her face away to show off her twerking booty to the crowd, who went wild over Megan’s dance moves. The Texas native accessorized her gorgeous look with a large gold necklace and a pair of open-toed silver heels, while her long brunette hair was styled in gorgeous curls.

After her show, Megan continued partying at a club where she posed for some selfies with a bunch of fans. Her boyfriend Pardison Fontaine could be seen carrying the rapper up a flight of stairs at the club. Megan kept on dancing and twerking at the afterparty for many more hours, until she capped off the wild night by returning to her friends at the hotel room.

Megan has been living her best life as she prepares to kick off her next “Hot Girl Summer.” She recently attended the 2022 Met Gala and walked the red carpet in a stylish gold metallic top with a matching high-slit dress and wings on her arms. Megan also made her Coachella debut on Apr. 17 and gave her fans a brief performance of her new hit single “Plan B,’ which is expected to be the second single from her forthcoming second full-length album. “Plan B” follows “Sweetest Pie,” the song Megan and Dua Lipa released in early March.