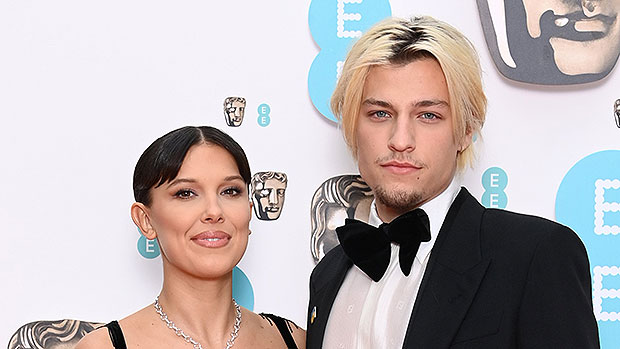 
Millie Bobby Brown wore another bikini while vacationing with boyfriend Jake Bongiovi! The Stranger Things icon, 18, opted for a blue star-covered top by Louis Vuitton, along with a neon green sarong. Millie and Jon Bon Jovi‘s son, 20, were all smiles as they went for a boat ride around the island of Sardinia, Italy on Thursday, July 7, in the photos published by Page Six.

The loved up pair couldn’t help but pack on the PDA as they snuggled up on the boat, also sharing a kiss! At one point, Jake was also spotted giving a thumbs up — presumably to the boat captain — during their journey.

Millie stayed protected from the sun with a large straw hat and a Y2K themed pair of sunglasses, along with a couple of luxury accessories from French jeweler Van, Cleef & Arpels. She sported the brands signature 5-motif Alhambra bracelet in the black Onyx stone around her wrist, as well as the matching ring with a small diamond on her hand. Finally, the actress added a silk scarf that appeared to be by Pucci or Hermes around her neck.

Jake was also casual in his boat look. The 20-year-old opted for blue shirt covered in sunflowers, as well as a striped pair of bottoms. His bleach blonde hair poked out of his black baseball cap worn backwards. He also added a pair of black sunglasses to his look, and a pair of  Kanye West‘s popular Yeezy x Adidas resin slides.

The pair, who have been dating since summer 2021, were also spotted vacationing a day prior. Jake could be seen leaning down to kiss the Florence by Mills founder as she sat on top of a beach towel, also on a boat. Jake was rocking a vintage red Dior pair of swim trunks and a hat, while Millie went with a black bikini and a trucker style baseball cap. Both Jake and Millie seem to be having a blast on their Italian getaway, and creating plenty of wonderful memories!

Millie Bobby Brown’s Boyfriend History: Everything To Know About Her Romance With Jake Bongiovi