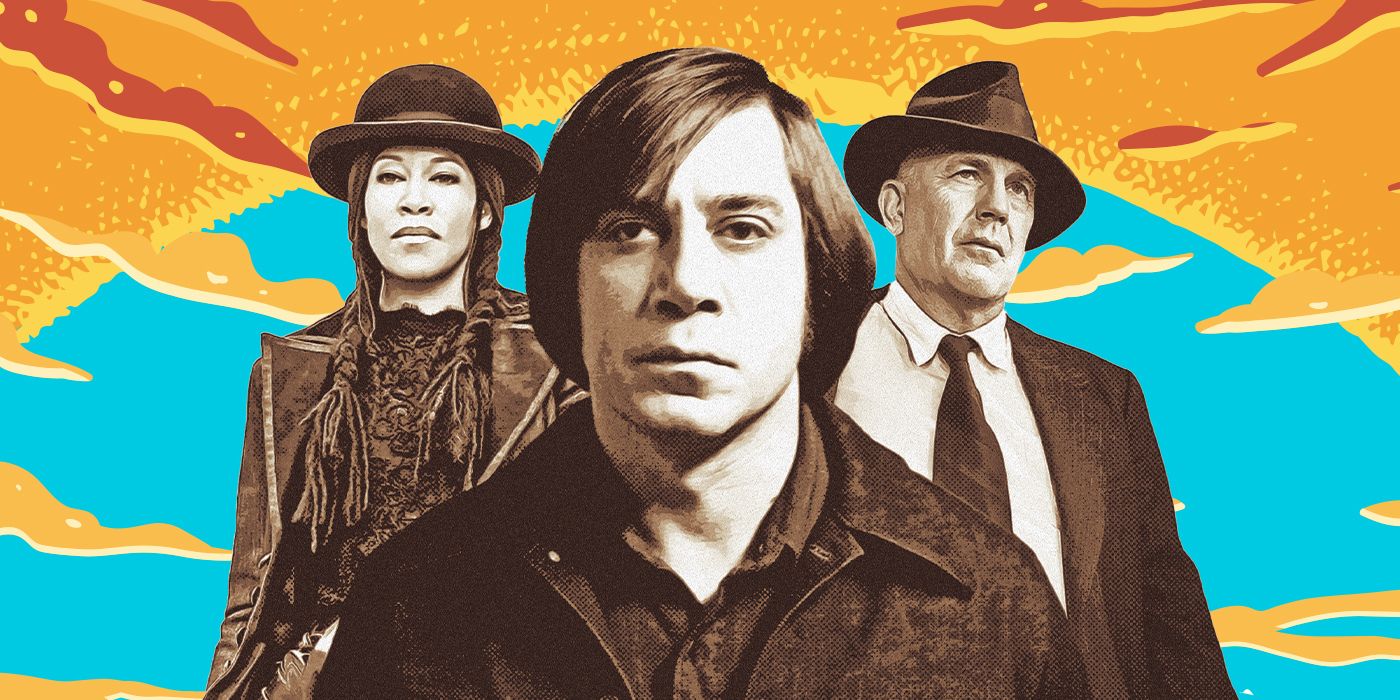 A faithful adaptation of the legendary novel by Cormac McCarthy, the neo-Western No Country for Old Men is an Academy Award-winning masterpiece. Many have revered the story for its many existential themes, including the ever-present conflict of good vs. evil and the inevitability of violence. In the film, Vietnam War veteran Llewelyn Moss (Josh Brolin) must defend himself against psychopathic hitman Anton Chigurh (Javier Bardem) when he takes a briefcase full of cash that Chigurh has been tasked to acquire. If you’re looking for movies similar to the classic that may live up to its morally complex plot, thought-provoking themes, and/or compelling villain, then check out the following list.


RELATED: ‘No Country for Old Men’ Ending Explained: The Nature of Violence and Generational Change

Another modern western that blends in the neo-noir genre, Hell or High Water is packed with action, violence, and angst. Similar to No Country, it follows both the antagonists and the rangers so that viewers can gain perspectives of both sides. The biggest difference is that No Country’s antagonist is a cold-blooded killer, while Hell or High Water features two brothers, Toby (Chris Pine) and Tanner (Ben Foster), whose motivation for their crime is to pay off their mortgage after their mother dies. While arguably not as violent as No Country, this film illustrates how violence is sometimes necessary in such a senseless world.

This revisionist western directed by The Bullitts depicts a tale of black cowboys through an exceptional ensemble cast. Idris Elba plays Rufus Buck, a ruthless gang leader who, like Anton Chigurh, uses his own judgment to determine who lives or dies, opting to kill those who are unhelpful to him. The plot is driven by a classic Western motif: revenge. Jonathan Majors plays Nat Love, an outlaw who seeks to assassinate Buck for killing his parents long ago. One of the most prevalent themes that makes this film similar to No Country is the uncontrollable evil of the world and the protagonist’s inability to understand it. This film also features an outstanding hip-hop-influenced soundtrack, differing it from every other film on this list.

Much like No Country, this film is a violent crime thriller. Directed by Martin Scorsese, it follows Amsterdam Vallon (Leonardo DiCaprio), an Irish immigrant who seeks to avenge his father’s death. Daniel Day-Lewis shines as William “Bill the Butcher” Cutting, an authoritarian gang lord who murdered Vallon’s father. Like Chigurh, Cutting’s ruthless nature is explained by his (albeit nonsensical) personal moral principles, in particular, his nationalist discrimination against United States immigrants. Vallon, like Moss, must confront the antagonist’s unreasonable sense of justice and fight for his own freedom. This film does not contour to the neo-Western genre and takes place about a century before Old Country, but it deserves a mention due to its similar themes, overall tone, and outstanding antagonist.

Perhaps not as well-known as other movies on this list and certainly not as revered as No Country, this film follows Henry (Tim Blake Nelson), a widower who stumbles upon a half-dead man (Scott Haze) near his homestead. Though he tends to his wounds and brings him into the safety of his home, Henry suspects him to be an outlaw, and things are complicated even further when three men who claim to be lawmen show up. The similarities between these two films include the ruthlessness of the antagonists and the harsh depiction of violence. This film also fits the revisionist Western genre and exhibits a somber, futile tone as Henry grapples with his place as an older man in a changing world. This underrated film definitely deserves a watch from No Country fans.

This film also takes place in Texas and is set about 50 years prior to No Country. It tells the true story of rangers Frank Hamer (Kevin Costner) and Maney Gault (Woody Harrelson) as they come out of retirement to hunt down the notorious Bonnie and Clyde. A notable difference in Highwaymen is that it primarily follows the dutiful lawmen, while the ruthless killers are only shown in brief snippets and hardly given any screen time at all. Still, this allows the audience to connect with the rangers and their personal dilemmas, while Bonnie and Clyde become more fearsome through their enigmatic nature. Check this one out if you’re looking for a satisfying tale of lawmen seeking to root out a senseless evil.

The Assassination of Jesse James by the Coward Robert Ford (2007)

Andrew Dominik directs this haunting neo-Western period piece about the outlaw leader of the James-Younger gang, Jesse James (Brad Pitt). Casey Affleck delivers a spectacular performance of Robert Ford, a young fan of James who seeks to join his notorious gang. But his friendship with James turns sour as jealousy and paranoia overwhelm him. Like No Country, this film doesn’t shy away from violence, though James’s violent nature doesn’t appear as nonsensical as Chigurh’s. Nick Cave and Warren Ellis’s emotional score perfectly supports the film’s heartbreaking message about the unfairness of the world, a message also illustrated through Sheriff Bell’s dreams at the end of No Country.

Another novel adaptation screen written and directed by the Coen brothers, this film follows a 14-year-old named Mattie Ross (Hailee Steinfeld) who seeks help from stubborn lawman Rooster Cogburn (Jeff Bridges) to track down Tom Chaney (Josh Brolin), who killed Mattie’s father for only two medallions. True Grit was perhaps overshadowed by No Country as both films premiered in the same year. However, what sets this film apart is its focus on the characters and their development as opposed to the world’s cruelty. True Grit shows how a young teenager, as opposed to an old man, views an unfair reality, bringing a sense of hope into the narrative through her naïveté.

Based on The Road, a McCarthy novel published around a year after No Country, this adaptation carries over the theme of the bleakness and despair. Set in a post-apocalyptic wasteland, a man and his son travel toward the sea in hopes to survive in a fallen society, navigating the uprising of dangerous savages who threaten their lives. As with No Country, the film often calls into question where the good remains in an uncertain culture. Furthermore, it is continually referenced that the older protagonist (Viggo Mortensen) comes from “another world,” unlike the hellish landscape that his son (Kodi Smit-McPhee) has become familiar with. The grim, solemn tone may prove off-putting for some, but the haunting tale is undoubtedly an unforgettable experience.

This film follows Tom Stall (Viggo Mortensen), a meek family man whose dark, violent past as a mobster is revealed after he effortlessly kills two robbers in self-defense. Much like No Country, this movie depicts a protagonist who must unveil his inner violent nature when the safety of himself and those he loves is threatened. This film also obviously contains brutal and graphic violence and the theme of society’s inevitable need for it. For those seeking a modern take on common Western themes and a neo-noir atmosphere, A History of Violence deserves a place on your watchlist.