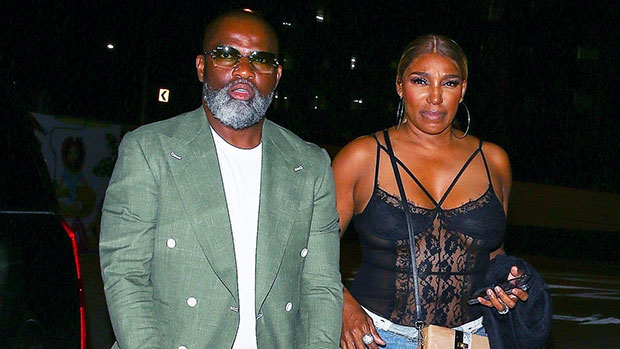 
Night on the town! Nene Leakes, 54, and boyfriend Nyonisela Sioh, 56, had a special night out in Miami on May 8, both wearing stylish looks as they enjoyed their date night together. Nene rocked a sheer, lacy black bodysuit tucked into on-trend distressed boyfriend jeans, accessorizing her look with pale pink pointed heels, a small square purse, and large silver hoops.

Nyonisela was just as stylish for the evening, sporting a sage green linen suit over a white tee. His look had unique, chic touches, like floral lining of the jacket which showed up in his rolled-back cuffs, tinted sunglasses, and, perhaps the best part, furry brown slipper sandals. The pair was headed to none other than Nene’s fellow Real Housewives of Atlanta alum Peter Thomas‘ Bar One restaurant.

The night out in Florida comes after the former RHOA star announced she was suing the companies behind the Bravo show, claiming they fostered and tolerated a hostile and racist work environment, according to her lawsuit, which was obtained by Our Source.

The lawsuit, which was filed in federal court in Atlanta, says Nene complained to executives about years of racist remarks from her co-star, Kim Zolciak–Biermann, but only Nene suffered the consequences. NBCUniversal, Bravo, the production companies True Entertainment and Truly Original, executives from the companies, and Real Housewives executive producer Andy Cohen are all named as defendants. Kim Zolciak-Biermann, however, is not.

Upon hearing the news of the suit, RHOA star Kandi Burruss, appeared on SiriusXM’s The Clay Cane Show and discussed the matter.

“Realistically, I don’t agree,” Kandi, 45, said about her former co-star, who quit the show a second time after season 12 in 2020. “Everybody can have their own opinion. I did not agree,” she added.

Kandi went on to reveal that “for years,” Nene would allegedly “brag about being the highest paid Housewife” to her fellow cast members. “Definitely she would tell everybody she was the highest paid on our show,” Kandi explained. “With that being said, you can’t brag about being paid the most out of anybody and then say that they’re not treating you right.”