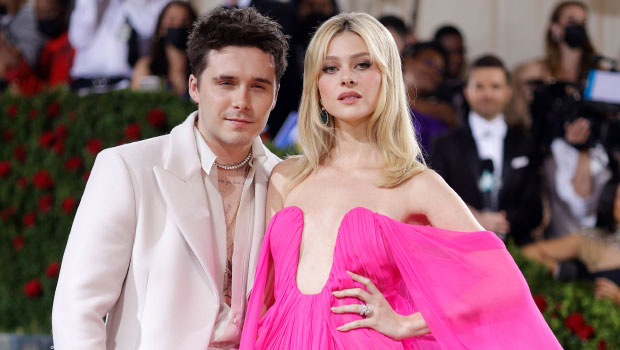 
Nicola Peltz, 27, wowed when she gave fans a close-up look of her engagement ring and wedding band for the fist time, in her latest social media pics. The actress posed from her bare shoulders up and showed off the epic $3 million gems as she held up a Sony camera with a confident facial expression. Her blonde hair was down and bangs hung down her forehead as her long nails were on full display in most of the snapshots.

Another pic also included a close-up of her new husband Brooklyn Beckham. The doting spouse rested his head on his wife’s shoulder and looked off into the distance as she looked ahead with a serious expression. There was also a black and white close-up of just Nicola’s face as she looked over to the side.

Nicola’s new photos come after she gave a glimpse of her rings at the 2022 Met Gala earlier this month. She attended the fashionable event with Brooklyn and they posed together on the red carpet. She looked incredible in a light green gown that had a sheer bottom during the after party as the son of David and Victoria Beckham also looked great in a white sheer top and white pants.

Nicola and Brooklyn’s Met Gala appearance is the start of what’s sure to be many joint appearances together as a married couple. They got engaged in July 2020 after Brooklyn proposed and initially gave his bride-to-be emerald-cut diamond solitaire with a pavé band. Their wedding took place on April 9, 2022 in Palm Beach and included various stars on their guest list.

Shortly after their wedding, the lovebirds took to Instagram to share several photos of their big day and they both looked breathtaking. Between Nicola’s custom Valentino wedding gown and Brooklyn’s tuxedo, the stylish attire was one of the highlights of the loving ceremony. We look forward to seeing future outings with more iconic looks from the new Mr. & Mrs. Beckham!

Brooklyn Beckham’s Siblings: Everything About His Relationship With His 2 Brothers & Sister Harper