HomeHollywoodNikki Bella Says She Has Unfinished Business’ With Charlotte Flair Ahead Of...
Hollywood 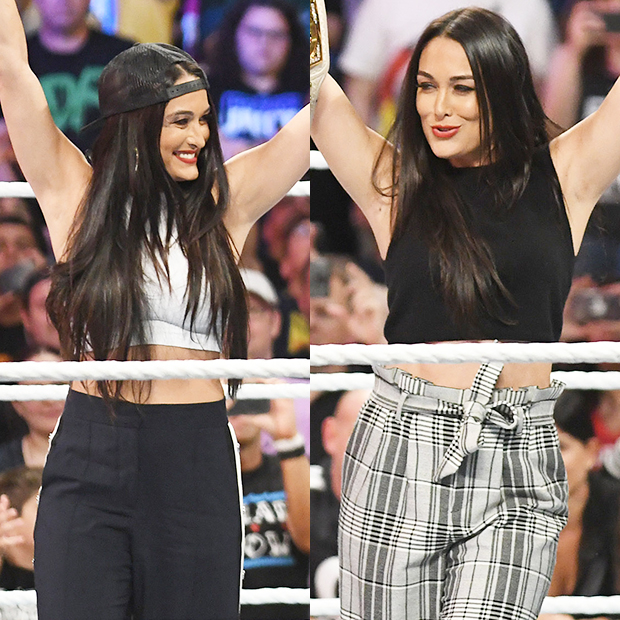 
The Bella Twins are back! For the first time in over three years, Nikki and Brie Bella will step into a WWE ring at the Royal Rumble, and Nikki says she’s looking to settle the score with some old rivals.

“Brie, I don’t know about you, but I’m going in to win,” Nikki Bella told her twin sister, Brie, when discussing their WWE return during the Jan. 12 episode of The Bellas Podcast on SiriusXM’s Stitcher. During the Jan. 7 episode of SmackDown, the WWE announced some participants in the women’s Royal Rumble match, and Nikki and Brie, 38, were among the named competitors. The Bellas haven’t wrestled since 2018, and it appears Nikki has been holding onto a grudge since then. “I’ve had unfinished business with Charlotte [Flair], so why wouldn’t I want to go back there [to the WWE],” she said.

“And then, I’ve never had business with Becky [Lynch],” added Nikki, “and I would love it. And then, there are the [Women’s] Tag titles. Because I would kind of like to be the first-ever winner of the Royal Rumble to kind of give the middle finger to both champions, to go, ‘I want the tag titles.’ Like, how badass would that be? Would I not be the coolest person to go down in history? I’d feel like I’d have a little “Stone Cold” Steve Austin to me.”

Nikki isn’t the only Bella with some unresolved issues within the squared circle. “I feel like, the last Royal Rumble – the only one I’ve been in, the first-ever women’s Royal Rumble – the way I was taken out, it wasn’t very nice,” she said. “I don’t even remember,” said Nikki with a smile. “Oh, you don’t?” said Brie accusatorily. “Because it was you. And you better watch your back too, girl.”

The Bellas haven’t competed in the WWE since late 2018. Nikki’s last match was a loss to then-WWE RAW Women’s Champion Ronda Rousey, per CageMatch.net. A month before that attempt, Nikki teamed with Brie and Ronda to defeat Liv Morgan, Sarah Logan, and Ruby Soho (competing under the name Ruby Riott). Brie announced in a 2019 episode of Total Bellas that she was retired from the ring, and during a 2021 episode of the Sippin The Tea TV Show, Nikki said that the doctors had “put me on the retired bench for life.” During The Bellas Podcast, Nikki discussed how she was medically cleared for in-ring action after undergoing MRIs and scans on her brain, neck, and other places.

The 2022 Royal Rumble, taking place at The Dome at America’s Center in St. Louis, Missouri, will be one for the history books. Not only does it mark the 35 years of the titular match, but the women’s match will see a lineup of returning stars, like Michelle McCool, Kelly Kelly, Summer Rae, Lita, the Bella Twins, and Mickie James – who is currently Impact Wrestling’s Knockout World Champion. “I was shocked they announced it because usually, these are surprises, but I understand, marketing-wise,” said Nikki said on the podcast, per Fightful. Brie added, “Business-wise, it makes sense because now we can have the whole Bella Army there.”

Selfishly, that’s why I was happy about it,” said Nikki. “No one would have ever expected you and I to be in the Rumble, so it makes me happy that the Bella Army knows, and they can go.”