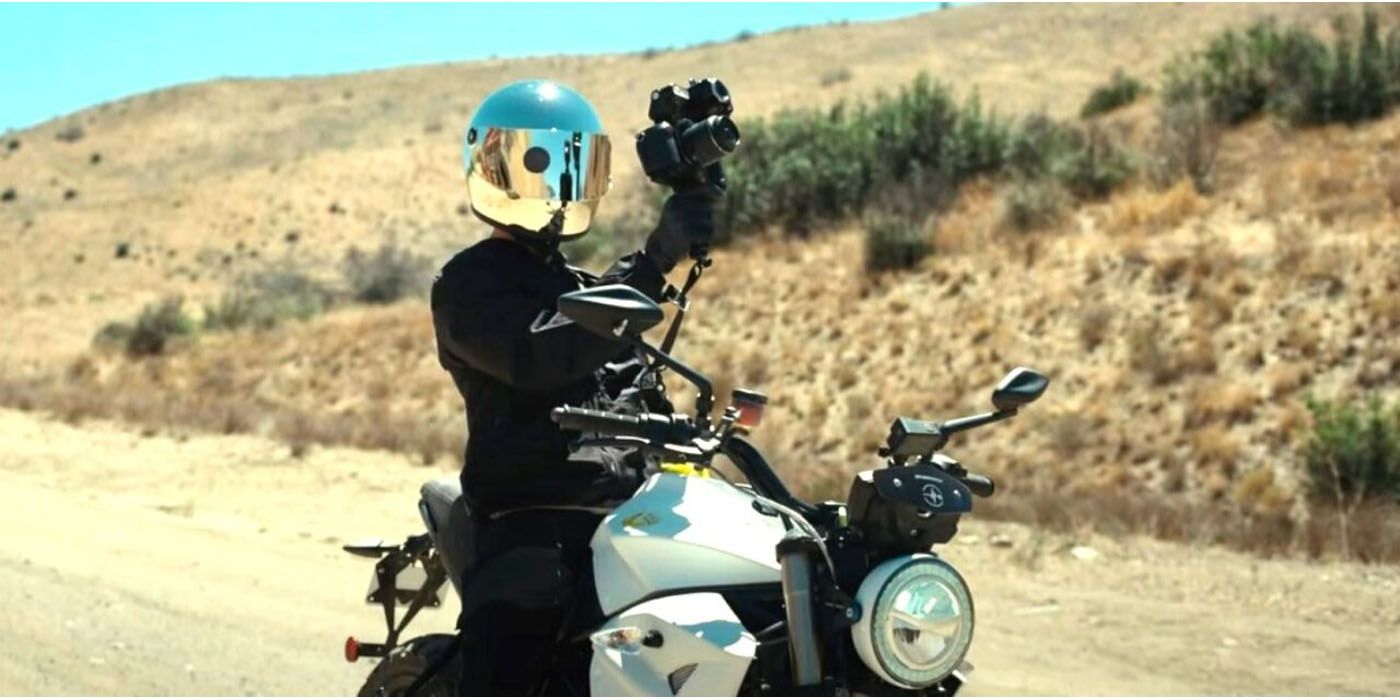 Jordan Peele’s Nope is crammed with spine-chilling moments of terror and dread, many of which are red herring scares. Fake-outs. Right at the start of the climactic final quarter of the film, as OJ (Daniel Kalluya), Em (Keke Palmer), Angel (Brandon Perea), and Holst (Michael Wincott) are about to set an elaborate trap to finally catch the all-consuming monster named Jean Jacket, a man on an electric motorcycle (Devon Graye) clad in a mirrored helmet appears. When Em approaches to ask him what he’s doing out there, he replies ominously, in a (very) creepy voice “You see that cloud?”
- Advertisement -

Who is this guy? A fed? A private investigator? A humanoid alien, somehow connected to Jean Jacket?

Nope. It’s just a TMZ reporter, out to capture footage of Jean Jacket — and an interview with Em and them —presumably to sell to some network for whatever exorbitant amount such spectacular content would be worth. He shoots off a rapid-fire succession of questions at Em, raising some conspiracies in an attempt to dig to the bottom of the bizarre occurrences at Jupe’s (Steven Yeun) Star Lasso Experience. Once rebuffed by Em’s lack of cooperation, the guy takes off on his bike, camera propped in preparation to capture some seriously weird footage.

It may seem like an unnecessary detail, a bit that disrupts the flow of the film’s most unrelentingly suspenseful scenes, but of course, Peele has a particular intention here. The reporter reinforces Nope’s major theme of humanity’s tendency to be drawn towards and to exploit spectacles. The reporter arrives for no reason other than to make some quick cash off the supernatural phenomenon, the sort of irrational behavior that ultimately leads to his demise.

RELATED: Jordan Peele’s ‘Nope,’ ‘Us’ & ‘Get Out’ All Show the Biblical Repercussions of Playing God

We’ve seen that wherever Jean Jacket goes, electricity stops. It’s why Holst rigs a non-electric film camera in attempt to shoot footage of the creature. Of course, since the reporter’s bike is electric, and since he’s hurtling toward Jean Jacket’s anti-electric field, the bike suddenly malfunctions, flinging the poor dude across the dusty desert. OJ heroically attempts to save his life (risking his own in the process), only to have his rescue refused. Instead, the guy pleads for OJ to capture some footage of him laying in his mangled post-accident wreck. To him, it’s all that matters: the footage.


Unfortunately for him, he gets sucked up by Jean Jacket, where he’s promptly digested alongside Jupe and his Star Lasso attendees. And just like that, he died as he lived: chasing the spectacular and scoop-worthy.

It’s a brilliant inclusion to one of the movie’s most pivotal moments for several reasons. For one, as previously mentioned, it works to tie in one of the core overarching themes of the film, which is the exploitation of the world’s spectacle. For another, it reminds the audience of several important previously-stated points of interest, such as Lucky The Horse’s dismay at seeing his own reflection, as well as the electrical-stopping power of Jean Jacket’s aura. And for yet another, it’s just damn good filmmaking, blending the suspenseful with the comedic (“you can use my camera” the reporter groans as he begs for OJ to snap a quick photo), giving our core protagonist a reason to be put in immediate danger once again.


With Nope, Peele has proven himself of deception. Throughout the film, he taps into unsettling, scary images that have very real and unthreatening realities behind them. Like the group of gray-faced little aliens that overrun OJ’s stable or the jump-scare of the horrendous praying mantis face that appears suddenly before the Haywoods’ surveillance camera, the sudden appearance of an eerily-spoken man in a mirrored helmet conjures immediate discomfort. What could be an ominous threat is unveiled to be nothing but a TMZ reporter looking for a quick buck. Peele uses this seemingly dismissible moment to his advantage, pulling suspense from it and once again restating the film’s intention.

There’s nothing supernatural or mysterious here. It’s just a normal guy, a paparazzo of sorts, who talks way more creepily than he needs to.